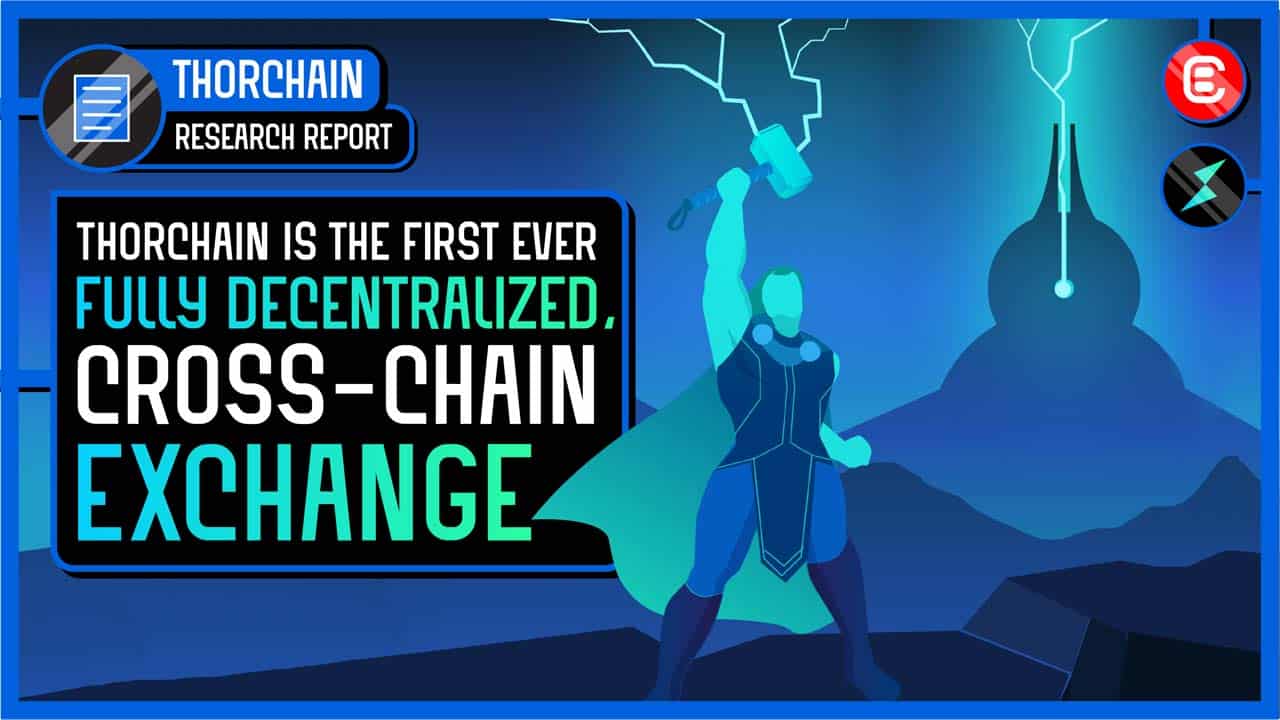 WE ARE BULLISH ON THORCHAIN ($RUNE) AND ARE ACTIVELY ACCUMULATING THIS TOKEN. HERE IS WHY.

With the meteoric rise of DeFi ($80BN TVL), decentralized exchanges (DEXs) are among the hottest sectors.

2. Self-custody and no risk of an exchange hack.

The real DEX explosion started when automated market makers (AMMs) type DEXs such as Uniswap, SushiSwap and Bancor were introduced. Unlike ordinary DEXs that require a counterparty for every trade, AMMs rely on liquidity pools that are provided by users. This ensures that there is a ‘counterparty’ for every trade immediately.

Since then, DEXs have exploded in usage and volume (see table below) and Uniswap, the world’s largest DEX, is now in the top 10 coins by marketcap.

The biggest limitation of the aforementioned DEXs is that they are limited to trading tokens on a single chain. This means that users on Uniswap can only buy tokens on the Ethereum chain and, similarly, PancakeSwap users can only trade tokens on the Binance Smart Chain (BSC Chain).

Another big problem is that because of this, Bitcoin can only be involved synthetically by ‘wrapping’ the Bitcoin. This causes people who want to continue holding their native Bitcoin to miss out on acquiring a yield.

THORCHAIN SOLVES THIS PROBLEM IN A DECENTRALIZED WAY.

On the THORChain Chaos Net, crypto users can do cross-chain swaps of different tokens like Bitcoin, Ethereum, Litecoin and more. This allows for a truly integrated crypto ecosystem where traders and DeFi users are no longer limited to one chain. To add to this, over US$1 trillion worth of Bitcoin now has a place to go to acquire a yield.

THORChain makes this possible by having multiple vaults consisting of vault addresses for each supported chain. Each chain has one primary vault and multiple smaller vaults for faster transactions – comparable to a CEX’s hot and cold wallets. A group of nodes is responsible for these vaults and reads the transactions related to the vault addresses. When a user performs a swap, it sends its tokens to the vault address. This is observed by the group of nodes and once confirmed, the group of nodes comes to a consensus to send back the other token involved in the swap.

A DECENTRALISED PLATFORM THAT HANDLES CROSS-CHAIN SWAPS IS AMAZING ON ITS OWN, BUT THERE ARE OTHER BENEFITS TO THORCHAIN:

Anyone who has provided liquidity on a DEX has probably had to deal with the unpleasant experience of impermanent loss (IL).

THORChain is decentralized and requires no KYC; users therefore do not face these restrictions and are allowed to trade freely.

As mentioned, THORChain nodes carry a lot of responsibility because they guard the vaults. To ensure the safety of the assets in the vaults, incentives on the THORChain network are set in such a way that it would never be profitable for nodes to misbehave. Nodes have to bond significant amounts of RUNE tokens to become a node. The summed-up bonds of the nodes must be equal to twice the amount of non-RUNE assets pooled on the network. This, combined with the fact that all nodes must reach consensus before (harmful) actions can be taken, makes it economically unprofitable and therefore basically impossible to exploit the network.

A multi-chain wallet that allows users to send, receive and interact with a variety of native chains, all in one interface. Think MetaMask but for all chains in one.

Now that THORChain’s Chaosnet has been released, the doors have opened up for other projects to start building on top of THORChain and expand the ecosystem. One that has captured our attention is Thorstarter, an initial DEX offering (IDO) launchpad platform built on top of THORChain.

As with many projects in the space, the THORChain team is pseudo-anonymous and has been building since 2019. The team is executing a plan that will decentralize the project completely by July 2022.

Although we are not big fans of anonymous teams, this team has built a reliable reputation by constantly delivering on the product, as well transparently communicating along the way. By doing this, the team has built a loyal and highly engaged community, which will eventually be able to take control of the protocol, making it truly decentralized.

Several big names are openly supporting and contributing to THORChain such as Chad Barraford (technical lead at THORChain) and Erik Voorhees (CEO of ShapeShift). As Erik puts it in the THORChain clubhouse meeting: “THORChain is one of the coolest projects in the crypto world that I have seen since I have learned about Bitcoin.” In a recent tweet, he also mentions the release of THORChain Chaosnet being bigger than the Coinbase IPO.

There are many use cases for the RUNE token.

RUNE serves as the settlement asset, so that a Bitcoin-to-Ethereum swap happens by first selling Bitcoin for RUNE and then buying Ethereum with RUNE. This happens behind the scenes and users do not notice this step. This way of conducting swaps allows for greater liquidity, as each asset only has to be pooled against RUNE.

Furthermore, the token is used to provide incentives on the network. Here is how:

Large players hosting nodes earn a big share of the platform fees. Smaller players can choose to provide liquidity to any of the native assets to RUNE pools. Both methods accrue profit by getting a share of the swap fees distributed in both pooled assets, as well as block rewards distributed in RUNE.

Correctly incentivizing the RUNE token also ensures security. It does this by making misbehavior on the network costlier than the rewards that can be obtained, as explained above.

By simply holding RUNE, you will also profit from the success of the platform. RUNE has a unique system in that the price of RUNE is directly correlated with the total value locked (TVL) in the THORChain network. By lining up the rewards in such a way that the network will only be in balance when the marketcap is at least equal to three times the TVL, this system ensures that the RUNE token always captures the success of the network.

Currently, almost 50% of the total supply is circulated. When the main net (the full release without restrictions and including all planned assets) releases later in the year, it will trigger some token lock-ups to start releasing tokens. This can be seen by the squiggly line on the chart. Apart from that, RUNE tokens will release slowly and gradually over time.

After years of development THORChain successfully launched its main net on 13 April. Cross-chain assets can and have been exchanged seamlessly and safely using the protocol.

The TVL on THORChain including their BEPSwap platform is north of $700 million. To ensure a safe release of the Multi Chain Chaosnet, there is a limit placed on the number of funds allowed in the pools. With only a few days since release, the TVL on the Chaosnet is $38 million. These numbers will be much higher as the limits are raised.

The launch has been well-received by the market, as in the days leading up to and after the launch the price has surged from a little over $4 to over $15.

Should you be buying?

WE ARE ACCUMULATING $RUNE CONSTANTLY FOR OUR LONG-TERM PORTFOLIO. WE DO NOT HAVE A SHORT-TERM PRICE VIEW.

Thorchain solves one of the biggest challenges in the crypto space, namely that of seamless, cross-chain transactions.

This will allow for a better user experience and increased capital efficiency in the industry. It will also unleash more than $1 trillion in Bitcoin into the DeFi ecosystem.

Furthermore, as mentioned under security, the bonded RUNE for nodes must exceed the value of non-native assets. This means that they have to buy up RUNE as the TVL increases, making the RUNE price go up further as well. In equilibrium, the RUNE marketcap should be at least equal to three times the TVL of non-RUNE assets.

Think about this, with only Bitcoin’s current marketcap of US$1 trillion, if 1% would go to THORChain for native yield this would result in 3*US$10 billion, leading to a marketcap of US$30 billion. Add to this a bunch more native assets, as well as rising prices of these assets, and you will understand that the potential for $RUNE is endless.

Like any DeFi project, THORChain runs the risk of an exploit that can result in a loss of funds for its users. THORChain has however been in development for years and security has been a priority. It has also passed several audits.

Furthermore, centralised exchanges have been hacked numerous times which has led to users losing funds each time.