Crypto Banter3 days
Contributor
Yesterday’s CPI data announcement prompted the long-awaited market rebound. In today's show, Sheldon tells us how he thinks the crypto market will develop in the near future. 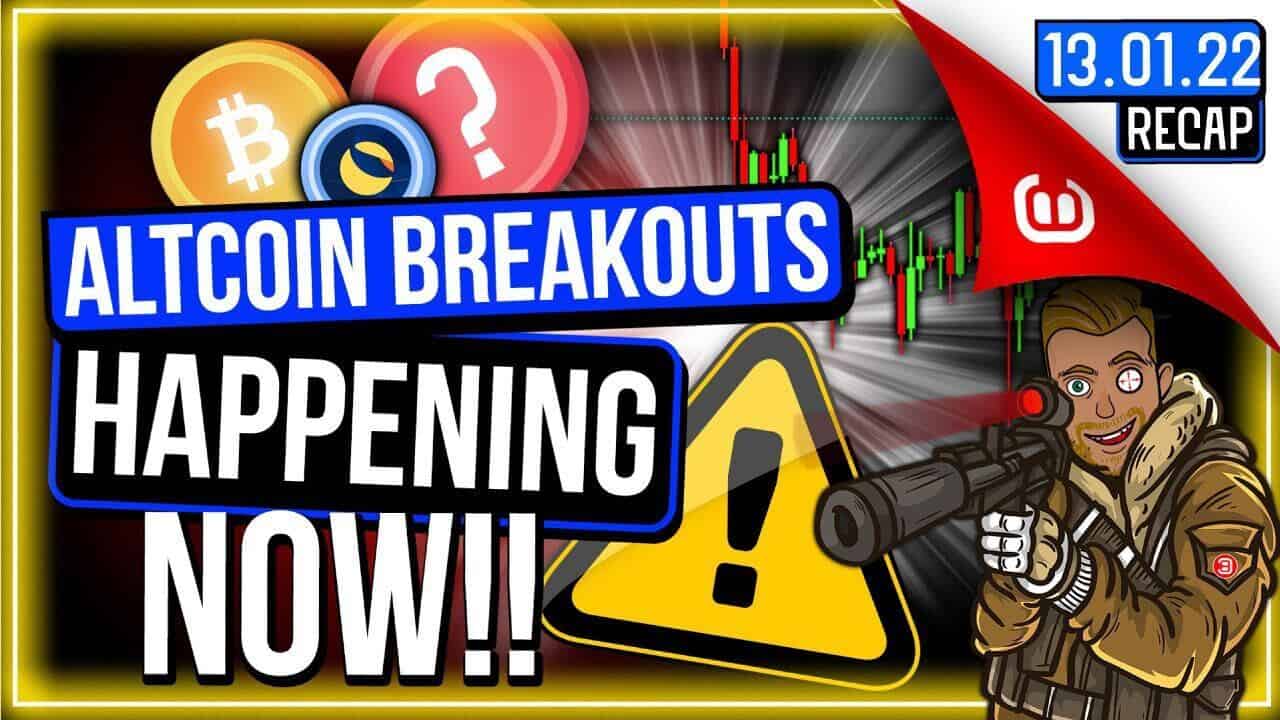 The long-awaited market rebound has arrived, thanks to yesterday’s good monthly CPI report, which relieved market sell pressure. Bitcoin must make a significant move to confirm which way the market will go

The long-awaited market rebound has arrived, thanks to yesterday’s good monthly CPI report, which relieved market sell pressure. Bitcoin must make a significant move to confirm which way the market will go. Sheldon examines the top altcoins with excellent chart setups and what the Bitcoin dominance current state means for the altcoin market.

Where is the market at?

Bitcoin is gradually surging after a shift in market sentiment following monthly CPI coming in at 7% as expected.

The $45k – $46k range, which lasted for a long time after the December catastrophe but eventually broke down, is the next Bitcoin resistance as the market continues its recovery.

A possible break clear of the resistance in the following days or weeks will signify a trend reversal and provide a signal as to what is next for Bitcoin, whether the bull market run will be reclaimed or the market will remain uncertain until the accumulation phase is over.

What’s more noteworthy is the fact that Bitcoin bounced off the primary trendline support on a macro scale, which is excellent because it demonstrates that the bull market is still alive despite recent drawdowns.

Bitcoin dominance is retesting downward trendline support after achieving a higher high, and a possible collapse back to lower lows might result in a strong push from the altcoins.

Bitcoin’s dominance should continue to rise after the retest because it tends to attract the most money initially. The current retest is allowing altcoins to catch up to Bitcoin after a large pullback due to the sell-off.

Bitcoin might be rejected at the major trendline resistance around $46k and fall back to $42k, implying that dominance would most likely stay around its present range before making a statement and breaking through the resistance.

$45k – $46k is the next level Bitcoin wants to recapture, and surprisingly, this price level coincides with the key resistance trendline that Bitcoin is nearing and might breach at any time.

The price level of the 200-day moving average (MA) is similarly $46k. The most critical short-term price level for Bitcoin to break is $46k, according to the convergence of these three major determinants.

Bitcoin could finally break out of its downward trend since setting a new all-time high in November. If it does, this could serve as a spark for it to reach even higher highs as market momentum and mood shifts.

The Bitcoin Fear and Greed index is still at its lowest levels, indicating that the market is severely oversold and that every time it returns to the range, the market quickly pumps.

This suggests that altcoins are gaining traction after being oversold, and people are looking for alternatives to Bitcoin as the only safe haven in the crypto market right now.

The US Dollar Index (DXY) has been declining in recent days, indicating that investors are shifting their funds away from the US dollar and toward riskier assets.

When the DXY falls, the traditional market rises, which is good news for the crypto market, which follows shortly after.

The DeFi index has been in a downtrend for the past five months, but it is now showing signs of life, supported by high volume. This indicates that a lot of money is pouring into DeFi, and the top tokens are worth monitoring.

The Digital Asset Index is intended to track the performance of tokens in the DeFi sector. The circulating supply of each token is used to weigh the index.

Investors, as opposed to traders, are always trying to buy excellent projects that are oversold and cheap in light of market conditions, as evidenced by high time frame charts and the stochastic RSI.

This has always been a long-term buy recommendation at Crypto Banter, and long-term buys are about putting them on your radar and profiting when the time is right.

Ether (ETH) is bouncing off support after forming a downward wedge formation. It went on to set new highs the last two times it followed this pattern.

However, the coin is not a suggested buy for short-term trading, though it is a solid long-term investment.

On the weekly chart, the stochastic RSIs are at the bottom, which is normally bullish. The last time ETH price action was at similar levels of stochastic RSIs was $1700, $1500, and $500.

Solana (SOL) had a strong day yesterday, but it is still projected to fall back around $130, as that is where investors are most interested.

Kusama (KSM) is a recommended short-term buy at current pricing of $274. The take profit price is over $300, with a $255 stop loss. However, KSM could go as high as $450 in the medium term, where the key trendline resistance is situated.

Terra (LUNA) is no longer a short-term trade at current prices after breaking through a four-hour resistance trendline. It’s a recommended buy around the resistance, which has now turned support, with a $72 stop loss. From $76 to $78, the take profit price is 22 percent.

ThorChain (RUNE) is up 12% since yesterday’s entry, with the next take profit price hovering around $8.

The Avalanche (AVAX) trade is still active if it returns to the $90 entry zone. The first and second take profit zones are $100 and $110, respectively.

It is recommended to take profits from the Polkadot (DOT) short-term trade around the $27-$29 range.

When Cardano (ADA) breaks through the major resistance structures, it is likely to go on an explosive rise. At present pricing, the cryptocurrency is oversold, and dollar cost averaging into it is recommended.

Chainlink (LINK) is not advised as a long-term investment because it has had a good run in recent weeks and is not appropriate to pursue pumps. A price drop to $23 is an excellent entry point.

Chainlink (LINK) will also be one of the front runners with Bitcoin if it breaks through the main resistance level, with a surge to $40 on the cards.

RNDR can trend sideways in the coming weeks and dollar cost averaging is encouraged for long-term play. RNDR short-term entry is at $3.9 – $4 with take profit goals at $4.6 and $5. Stop losses are set at $3.4 and $3.5, just below the previous low.

SushiSwap (SUSHI) is one of the DeFi coins that will do well in the short-term. The DEX token is currently trading at $6.9, with a stop loss of $6.7 and a take profit range of $8-$9.

Following the release of the monthly CPI report, which relieved the market’s sell pressure, the long-awaited market comeback occurred yesterday. You might want to get into some of these calls, but wait until they hit the purchase zones before jumping in, and don’t pursue pumps if you’ve already missed them. Now that all of the news holding us back is over, once the Crypto market gets a positive catalyst we’re off to the moon!