Crypto Banter10 days
Contributor
The market dynamics are continuously evolving, with price declines in Bitcoin and other prominent crypto currencies continuing. Here's where you can find out how low the market can go... 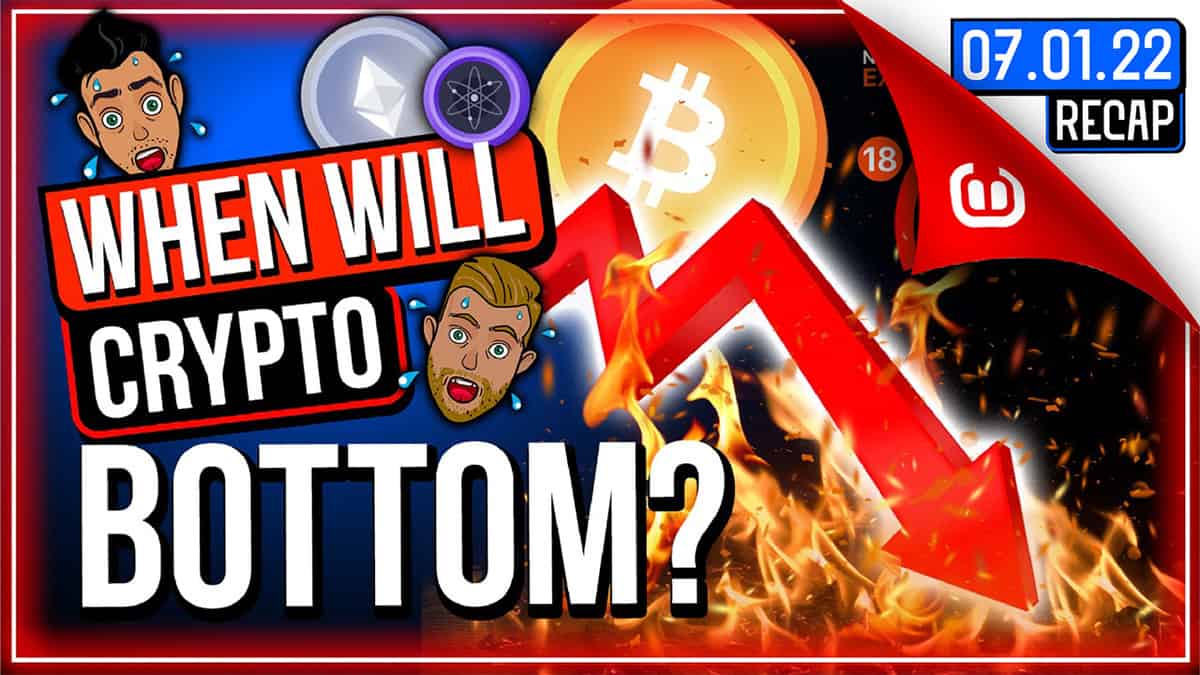 As the sell-off continues, market conditions are constantly changing. Will the $40k zone hold as support, and if not, where will Bitcoin go next, and what are the critical levels to watch?

As the sell-off continues, market conditions are constantly changing. Will the $40k zone hold as support, and if not, where will Bitcoin go next, and what are the critical levels to watch? In our morning show today, Sheldon explains which way he thinks the market will move, and the most important signs he looks at to figure out what the lowest price will be.

Bitcoin has been testing the 0.618 Fibonacci extension, aka the golden ratio zone, regularly. It’s amazing to observe how rapidly the market can surge to the upside, before crashing back down to the golden ratio zone for a test of support ahead of another, greater, rally.

The prior low recorded during the correction on 4 December 2021 was expected. That’s because of the number of times higher lows were tested and became weaker as they were tested, resulting in a breakdown.

It’s also worth mentioning that during the last correction, the market recovered fast. This resulted in a lengthy extended wick during which whales were unable to execute all of their purchase orders.

While retail is flushed out, the current zone is an accumulation zone for whales. A continued steady price decline towards what we are seeing now allows whales to fill their orders.

Remember that bulls have always been stronger than bears, because bears take longer to bring the price down, while bulls recapture the price faster after the bottom is in. So, yes, Bitcoin’s price is expected to rise quickly.

However, the dominance of Bitcoin will not reverse until the bottom is in, as indicated by the fact that it continues to be rejected at resistance. The direction of Bitcoin dominance will be determined by the market reversal, once the bottom has been reached.

A Bitcoin solo run is likely to occur in order to restore market confidence, which will result in a breakout for Bitcoin dominance to the upside.

Where could the bottom be?

The breakdown of Bitcoin’s prior support zones, which it had been bouncing off due to weakness, allows us to determine the next crucial levels to monitor.

The daily stock relative strength index (RSI) has reached its bottom. The weekly RSI, which is a broader gauge, is also oversold. And the monthly RSI is under 20%. Bitcoin was at $8k- $12k the last time it was in this range.

The previous low (set during the recent decline) has been broken, with Bitcoin trading as low as $41k. This implies that a repetition of the May 2021 price action is possible, when Bitcoin traded between $30k and $41k before breaking down to $28k, allowing whales to fill their orders and let the market run.

The price action from June 2021 to July 2021 fused into the current wave that began in December 2021. This indicates that Bitcoin might drop to $39k if a similar price movement occurs, which is exactly the current ascending trendline support.

BTC must close above the primary support level of $39k-$40k, and then hold, for the bull cycle to continue. An extended wick to $38k could be the bottom for the current price fall.

If we have a relief bounce after a down below $35k from here, it would be prudent to grab profits on the bounce. Because, remember, the lower low is still in play, and a steep drop to the lows hit in May and July is likely.

It would also imply that the bull cycle market will be substantially more extended, which people should take advantage of and make long-term target changes to.

ETH dominance has returned to retest the cup-and-handle pattern breakout and is now lingering below. But it has not made a major change to signal it could collapse back below, indicating that ETH remains strong.

The ETH/BTC pair broke out of a cup-and-handle pattern, but has now returned to retest resistance and hover around a wedge that is forming below it.

Solana (SOL) has pulled back to retest the Sheldon wedge support, and the $125-$130 zone should be held to calm the rising lows. If it falls below, profit-taking following a recovery rebound is recommended.

Terra (LUNA) may retrace back to the $60-$65 range, and is definitely a trend to watch.

Avalanche (AVAX) might retest and could hold support in the $75-$82 range.

Polkadot (DOT) took the big punishment first, with a heavy price decline from $55. However, it has held pretty well as Bitcoin became weaker. It is a good buy around the $22-$24 range.

Since its pre-December correction, Chainlink (LINK) has lost a lot of value and has not recovered as quickly as other prominent altcoins. However, as the market endures drawdowns, it is showing greater strength by bouncing harder.

Cosmos (ATOM) has done well throughout the drawdowns, but due to the recent run, it  is still trading near its all-time highs. It is recommended to wait for a little more pullback.

Polygon (MATIC) is still making higher lows, but it might possibly drop to the $1.9-$2.1 zone, which is a good buying range.

At present pricing, SuperFarm (SUPER) is still in Sheldon’s buying zone and is a recommended buy.

ThorChain (RUNE) is a bargain at current pricing, and is holding its support range despite the market’s decline.

Cardano (ADA) remains a smart buy because it is hovering near the golden ratio.

Elrond (eGLD) is recommended for dollar cost averaging (DCA) because it could fall to the $180 range.

Qredo (QRDO) is on the cusp of breaking out of a cup-and-handle pattern, and even if it drops to $5.5, it’s an opportunity to add more to your HODL bag.

The constantly evolving market dynamics mean it is time to review your portfolio. Shifting into coins that can survive the bear market is critical at this stage of the market.

It is also ideal to have some cash waiting on the side like to capitalize on the dip.