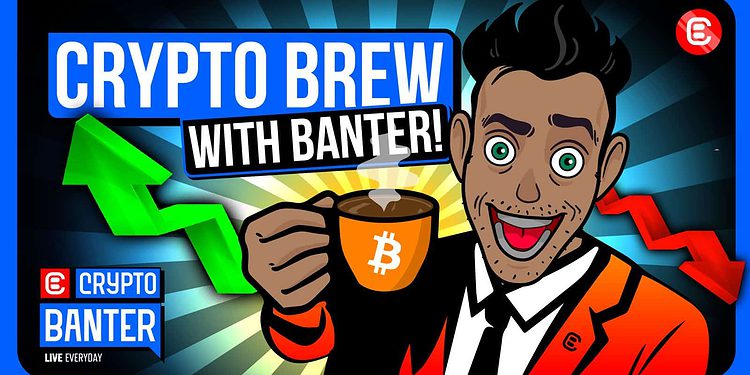 Crypto Brew with Banter is your morning cup of all things crypto that get and keep you 3 steps ahead of the markets. Stay up to date on the latest chart, hottest altcoin trades and breaking news to ensure you stay profitable 24/7 all year long!

Crypto Brew with Banter is your morning cup of all things crypto that get and keep you 3 steps ahead of the markets. Stay up to date on the latest chart, hottest altcoin trades and breaking news to ensure you stay profitable 24/7 all year long!

Bitcoin crossed the $37k mark with an increase in trading volume bringing much needed relief to market participants worldwide. All eyes are on the FOMC meeting today, which has been dubbed as ‘the single most critical event in determining the future of the global economy’.

Statements released by the Russian Ministry of Finance against the Russian Central Bank have given hope to all crypto investors around the world.

In other news, the tussle between the IMF and El Salvador has intensified. Amidst all this upcoming volatility and uncertainty, institutional interest in crypto has gotten a serious boost as the world’s largest asset manager continues to dip its foot in the world of crypto. Also, the love triangle of Elon, Dogecoin and Mcdonalds continues… Of course.

Today looks to be another action-packed day for crypto with a lot of macro news from around the world, all of which could have a direct impact on the price of crypto. Ohh yes – we have  two words for you: Youtube. NFT’s.

The talk of the town today is the FOMC (Federal Open Market Committee) meeting, scheduled for 2:00 pm ET. At 2:30 pm ET, Jerome Powell will be hosting the all-important press conference. FOMC meetings in the past have had a significant impact on crypto markets and the same can be expected today.

Even though most analysts expect the Fed not to raise rates, it could throw a curveball. Since this has not been priced in by the market, there could be a lot more downside.

The more probable outcome is the Fed not increasing rates today, rather increasing them in the March meeting and potentially not as much as expected. In this case, the markets will see a significant rally across the board for days, or even weeks ahead of the next meeting.

The speculation ends today and we foresee some volatility in the markets leading up to it.

Russian Ministry to the rescue

The statements released by the Russian Finance Ministry indicates its forward thinking approach to newer technologies like cryptocurrencies and has been applauded by crypto enthusiasts around the world.

Ever since El Salvador accepted Bitcoin as legal tender, there has been an ongoing tussle. The IMF has been vocal about its stance on Bitcoin as legal tender as it believes it could bring a lot of financial instability, particularly as more and more countries start seeing Bitcoin as a viable option. That said, El Salvador’s Bitcoin strategy will be the nail in the coffin for developing countries’ dependence on the IMF.

BlackRock, the largest asset manager in the world, with US$10 trillion in assets under management as of January 2022, officially filed for a blockchain ETF.

Last night, a cascading liquidation event caused a lot of investors to lose money in a situation that got out quicker than anyone could have expected.

The situation is still developing and the only sign of positivity for investors who lost their money were reassured by Daniel Sesta, leader of Wonderland and self-acclaimed leader of the Frog Nation who promised to resolve this issue, with a little patience from the community.

As the situation develops, what remains to be seen is if Wonderland can come back from this controversy and win back the trust of its long term investors. More to follow from the Banter investigative journalists soon!

Youtube CEO, Susan Wojcicki suggested the company may be looking to branch into NFTs. This is huge news not just for NFT’s but also cryptocurrency as a whole and is another sign of major corporations looking to delve into the world of crypto.

Elon Musk, the self proclaimed ‘DogeFather’ once again showed his love for Dogecoin by tweeting to McDonalds how he was ready to eat a happy meal on TV if it starts accepting dogecoin. McDonalds replied with conditions of its own.

To end this daily update, here’s one for your funny bones.

If you think you’re the only one worried how the FOMC might affect the market, you’re wrong.

Markets have shown significant strength leading up to the FOMC meeting. Crypto markets have been living in extreme fear since the beginning of 2022, and we all know that crypto is due some relief. The thing is, these markets are at the mercy of the FED’s hawkish/dovish stance at tonight’s FOMC meeting. We don’t see much of a middle ground in this outcome. Expect a big relief to $42k soon, or back to the lows for another test. Have a plan, manage risk and stick to it. There are plenty of opportunities regardless of tonight’s outcome.