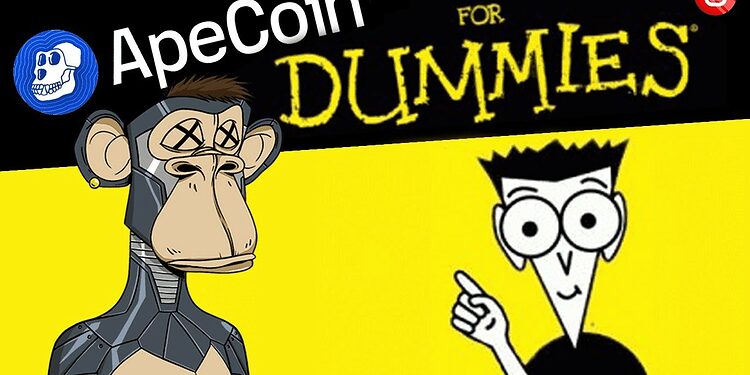 The dummy’s guide to ApeCoin

It’s the talk of the town. All the major exchanges rushed to list it. And widespread fear of missing out (FOMO) triggered an insane price rally within in a busy and volatile 24 hours.

It’s the talk of the town. All the major exchanges rushed to list it. And widespread fear of missing out (FOMO) triggered an insane price rally within in a busy and volatile 24 hours.

But let’s take a step back. Because although everyone’s heard of ApeCoin by now, who really understands it?

By the end of this article, you’ll be in the select minority of people who actually know what’s going on.

ApeCoin is an ERC20 token on the Ethereum network.

In simple terms, it will serve as a utility and governance token for the entire ApeCoin ecosystem.

We’re getting ahead of ourselves.

First, we need to explore the ApeCoin origins: the masterminds at Yuga Labs.

Yuga Labs is the gigabrained company behind the success of the most successful non-fungible token (NFT) collection of all time, the Bored Ape Yacht Club (BAYC).

The BAYC was started by four friends who allegedly wanted to pay their moms back: Within a year, it was a huge global brand, and early buyers were made rich.

What followed was expansion: Yuga Labs has since absorbed some of the largest NFT collections in the space, including the pioneering CryptoPunks and Meebits.

But they didn’t stop there.

After the success of BAYC, it released the next installment of their Ape series, the Mutant Ape Yacht Club (MAYC).

Through the purchase and use of NFT “serum”, Ape holders were able to mutate their BAYC NFTs and get the equivalent MAYC NFT. There were two levels of mutation.

Plus, Yuga also introduced the Bored Ape Kennel Club (BAKC), where users could mint pets for their Ape(s).

These different collections and variations inspired holders to strive to collect the full set.

None of this was done without a wider vision: Holders of these NFTs were granted exclusive member benefits too, like access to “the toilet”, a dApp allowing BAYC holders to add one pixel per 15 minutes to a picture of a digital toilet, essentially making up collaborative graffiti.

Then, they introduced a “members only” merchandise store for NFT holders.

How’s that for a masterclass in marketing and hype generation?

As a result, Yuga Labs has created one of the strongest (and most valuable) communities in the NFT space: a community that has been richly rewarded for its early conviction.

As if this wasn’t enough, now, Yuga Labs has a massive roadmap ahead, in which they plan to build up their brand and establish the company as the industry’s leader of NFTs and metaverse.

How big can this be?

Yuga Labs is expanding, creating what promises to be a hugely significant metaverse: MetaRPG (role-playing game).

And it’s got investors extremely excited.

MetaRPG will be home to BAYC LAND NFTs, existing and new Yuga Lab NFTs and an in-game marketplace (where you’ll be able to use your ApeCoin). There is also a play-to-earn (P2E) game underway, in collaboration with game developer nWay.

ApeCoin: What is it, what does it do, and why does everyone want it?

So, now for the actual APE token, which is already listed on major exchanges like Binance, FTX and KuCoin, and it is being airdropped to BAYC and MAYC NFT holders as we speak.

The total supply of ApeCoin is fixed at 1 billion tokens. There will be no minting (nor burning) functionality within the Ethereum-based smart contract.

APE will be the token for the entire Yuga Labs ecosystem: The main currency in the MetaRPG metaverse, a governance token used for voting on key decisions surrounding ApeCoin, as well as, potentially, being the foundation that all other NFT and metaverse projects build on.

Yuga Labs is set to fully adopt ApeCoin as the “primary token for all new products and services” that are created by Yuga Labs, including the upcoming play-to-earn game which is being created in collaboration between BAYC and nWay. In the teaser image shared by the BAYC twitter account, we can see a giant Mech Ape, which we will talk about further down.

Along with ApeCoin comes the ApeCoin Decentralized Autonomous Organization (DAO), formed to keep the ApeCoin ecosystem fair, inclusive, open, and above all, decentralized. It is currently overseen by five members of the community, but new board members will be voted on and rotate every six months.

The current board is made up of industry titans.

What else do we know so far?

Well, there was a recent leak of one of the pitch decks.

The team came out to say that it was outdated, but nevertheless, many of the stages seem to align with what has been playing out.

Plots of land within the MetaRPG metaverse are called BAYC LAND.

As seen in the leaked investor pitch deck, Yuga Labs are planning on releasing 200,000 plots at a price at 1 ETH a piece.

30% of the allocation will be given to BAYC and MAYC holders, and 70% will go on public sale.

The total amount of revenue expected to be accumulated from the BAYC LAND sale is around $178 million.

According to the leaked pitch deck, here’s the plan:

Okay, what now? Should you buy?

Given Yuga Labs’s success in the past, it’s hard not to feel the FOMO.

Here’s the situation as we see it:

If Yuga Labs manage to pull off creating the kind of huge, decentralized metaverse that everyone is hoping for, with ApeCoin at its center, the investment opportunity for APE could be massive.

As for buying now?

Let’s put it this way, how many tokens have pumped like crazy following major listings, and continued indefinitely, without the chance to settle down and reprice at an appropriate level?

Very few, if any.

It’s hard not to be excited about ApeCoin: Done right, and sparing any major disasters, it could be a contender as the underlying foundation in the NFT and metaverse space.

How’s this for a bullish comparison? ApeCoin could be as important for the NFT and metaverse space as smart contracts were for Ethereum.

And, if it proves to be as successful as it wants to be, the MetaRPG could very well be the massive decentralized metaverse that everyone is clamoring for.

MetaRPG represents the very opposite of Meta: A decentralized, community-governed metaverse with a loyal, vibrant community at the very heart of the action.