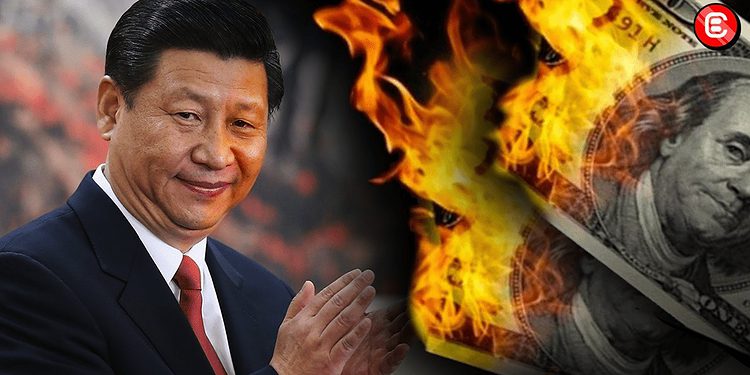 This could be lights out for the US dollar, and crypto’s time to shine

The US dollar is doomed: Its status as global reserve currency is under threat, and the world is waking up to the fact that it may just be a shitcoin.

The US dollar is doomed: Its status as global reserve currency is under threat, and the world is waking up to the fact that it may just be a shitcoin.

A picture speaks a thousand words:

This image from Ray Dalio’s recent book, “Principles for Dealing with the Changing World Order”, suggests that the dominant global currencies have historically enjoyed a predictable 250-year life-cycle, their fortunes rising and falling inexorably over time.

So, perhaps the demise of the dollar was unavoidable, the script is already written, and what we’re seeing play out is the actors just saying their lines.

Meanwhile, the dollar’s successor is waiting patiently in the wings.

The twentieth century saw the United States of America achieve economic hegemony, cementing the dollar as the undisputed global reserve currency. At present, it represents around 60% of currency in international central bank reserves.

Two decades ago, at the turn of the millennium, this figure was just north of 70%.

To the horror of “economists” like Steve Hanke, the dollar’s slow bleed has been underway for some time.

The events of this week have seen the tourniquet ripped off completely.

How did we get here?

The dollar’s position as the global reserve currency has created an insatiable demand, which means the US government can borrow at lower costs, benefit from an advantage in excess of $100 billion per year, and allow them to impose unilateral sanctions.

Clearly, the benefit of this depends entirely on perspective.

Meanwhile, China has been attempting to internationalize its currency. The Chinese yuan became a supplementary forex reserve asset back in 2016. Today, it represents 10.92% of the International Monetary Fund’s Special Drawing Rights (SDR) currency basket, which makes it the third reserve currency (behind the US dollar and the Euro) in the SDR.

China’s efforts to internationalize the yuan have gone in tandem with plans to reduce its dependence on the dollar, with China finally halting the purchase of US Treasury bonds back in October, 2020.

Russia also began divesting from dollars well over a decade ago, diversifying its reserve assets across dollars, gold, euros, and Chinese yuan.

In October 2021, Deputy Minister of Foreign Affairs of Russia, Aleksandr Pankin, stated that:

“It’s possible to replace the US dollar with other currencies, both national and regional, as well as some digital assets in the long term.”

Russia and China have dramatically shifted away from settling exports in dollars: Whereas dollars were the dominant currency used to settle Russia-to-China commodity exports in 2017 (around 90%), it fell to less than 30% by 2020.

Today, we can only assume it’s zero.

Last week, as US sanctions intensified, Putin’s government suspended the ​​20% value-added tax (VAT) on gold purchases in a bid to encourage citizens to dump the dollar.

Yesterday, on March 16th, Russia’s foreign minister, Sergei Lavrov, suggested that the nation may declare the US dollar illegal tender, after the USA had frozen Russia’s USD reserves.

As for the petrodollar (dollars-for-oil has been the post-1970s standard), the geopolitical chess match continues:

In a huge blow to the US, Saudi Arabia is reportedly considering selling oil to China in yuan.

To add insult to injury for the US, India is considering buying Russian oil… with Chinese yuan.

And Belarus has just agreed to abandon the US dollar for all energy transactions with Russia.

How this affects the USA

Badly. The US is in the midst of a debt crisis, an inflation crisis, and now a crisis of international standing.

As Ray Dalio might describe it, and as illustrated by his chart, the signs are all pointing towards the end of a cycle.

Last month, the Federal Reserve’s (Fed) chairman, Jerome Powell, made an unlikely admission before the US Congress. During his testimony on March 2nd, 2022, Powell said something we never thought we’d hear from the horse’s mouth:

Clearly, Powell was not referring to bitcoin, nor the yuan, and if anything at all, most likely the euro. However, the significance of this concession can’t be understated, because it tacitly acknowledges the demise of the dollar’s hegemonic status, and foreshadows the possibility of alternatives.

The Bitcoin maxis will be celebrating the decline of the dollar, and cheering on the likes of Senate-hopeful, Bryan Solstin, who has declared his candidacy with the primary objective of making bitcoin legal tender.

Good luck, Bryan, but that remains many years (and hurdles) away. However, the first step to solving a problem is recognizing you have one, and the US knows that theirs is far too large to ignore much longer.

Ray Dalio’s chart says it all: The dollar has peaked and is sliding towards secondary status. Change is coming, and the battleground could be between a digital dollar, a digital yuan, or a decentralized, open-source, alternative monetary system. It’s far too soon to predict the outcome, but one thing seems sure: The next ten years will see the global balance of power shift towards a new monetary era.