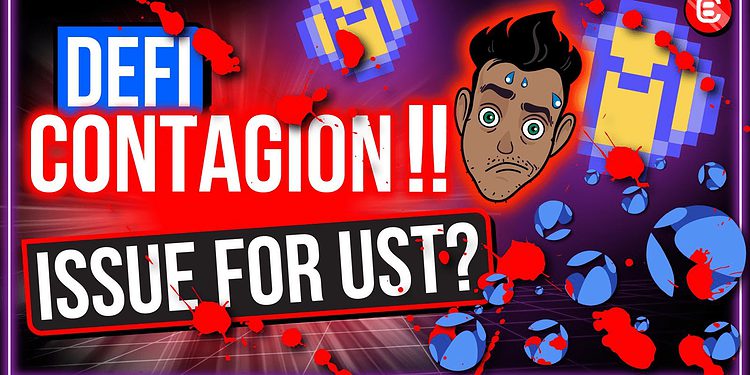 When stablecoins aren’t so stable, they can rattle all of crypto

DeFi's a surprise box; you'll never know which one you're going to get, even with stablecoins. At face value, they're good protocols that don't break unassisted. But when the market goes counter to what is expected, stablecoins become collateral damage, and there's real fear that UST will lose its peg.

DeFi’s a surprise box; you never know which one you’re going to get, even with stablecoins. At face value, they’re good protocols that don’t break unassisted. But when the market goes counter to what is expected, stablecoins become collateral damage, and there’s real fear that UST will lose its peg.

Stablecoins are pegged and stable at $1 because of the internal mechanism set up by every protocol. UST – Terra EcoSystem’s stablecoin – is algorithmically backed, meaning the peg is sustained either by burning LUNA or UST to maintain the balance.

UST dropping off the moon

In the aftermath of the Wonderland fiasco, Anchor Protocol has experienced a significant outflow of capital. This happened because investors started to exit their Magic Internet Money (MIM) positions, ultimately affecting the number of assets in Anchor Protocol. How does this relate to UST?

MIM’s Degenbox strategy implies that users leverage their MIM position against aUST in Anchor Protocol, and then sell MIM for UST to borrow more MIM. The cycle continues until they are effectively long on UST and short on MIM. But MIM became less attractive as there is less MIM used to borrow.

Degenbox worked as it should in recent days, but when things turned ugly for MIM, UST got the worst of it because UST was used as a collateral for loans in Abracadabra. Demand for MIM on Degenbox was at its highest, with 0 MIM available to borrow in the past couple of months. As volatility and uncertainty entered the market – especially given the events involving Daniele Sesta – suddenly, there was enough MIM to go around. Unfortunately, nobody wants it!

LUNA burns increased because less capital was used from Degenbox and people were less incentivized to borrow in the current market. That put more pressure on yield reserves, which have begun to deplete. More volatility brought more liquidations, leading to a bigger gap. This caused the community to raise concerns about the stability of the UST peg. But that’s not always the case, as crypto users tend to move towards risk-off assets in periods of market volatility.

There have previously been concerns about UST losing its peg; however, we must acknowledge that crypto needs decentralized stablecoins. USDT for example is presumably backed by the equivalent amount of US dollars. Even though Tether doesn’t hold the 1:1 value in US but rather in other commodities in its treasury, USDT still trades at $1.

LUNA’s not without resources. As VC investors and developers acknowledge – LUNA is necessary. During the high market volatility of May 2021, a 10-figure amount was added to the LUNA ecosystem to bump the peg back to $1. Even then, there was no bank run. This time round, the market narrative wasn’t favorable, and traders followed it, as per usual.

At present, the market is wondering whether Anchor Protol will have to change its yield APR if UST continues to lose its peg. It’s not out of the question. However, Yield Labs believes Anchor’s 20% APR is an ingenious market strategy that has paid dividends for the ecosystem, and will most likely continue to keep the same yield. Another capital influx  – from the company’s treasury – could allay de-pegging concerns.

Every innovation that occurs in the crypto markets needs to be tested. Algorithmic stablecoins like UST are considered to be Finance 3.0, and to prove they can sustain both a downwards and a bullish market, they have to be battle-tested. Taking a position in protocols that have yet to be battle-tested comes with associated risks, as we are seeing now. However, we are confident that Terra will withstand this test just like any other test up until now and will come back stronger.

One of the main reasons is that Terra has been backed by the biggest crypto investment funds, and the mid-2021 Messai report shows LUNA is one of the preferred assets by hedge funds. They’ve made huge profits through LUNA, and they have even bigger incentives to see it succeed. Then, early crypto funds investors could become the last resort as LUNA is battle-tested.