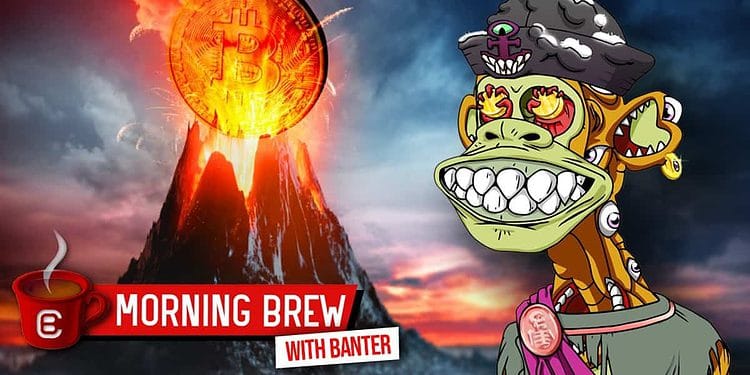 Are institutional investors about to ape into Ethereum?

The crypto market reclaims US$2 trillion with ETH showing strength, Nayib Bukele delays the volcanic bitcoin bonds, and the Canadian government failed to seize 70% of crypto donations to the trucker protest.

The crypto market reclaims US$2 trillion with ETH showing strength, Nayib Bukele delays the volcanic bitcoin bonds, and the Canadian government failed to seize 70% of crypto donations to the trucker protest.

All that and more!

Showcasing the effectiveness of decentralized assets, 70% of crypto donated to Freedom Convoy protesters has failed to be seized by Canadian government officials, according to reports. Instead, the crypto assets were “drained” before authorities could reach the funds.

The protest turned into a national spectacle that led to President Trudeau invoking the Emergencies Act for the first time in Canadian history. The act allowed government officials to seize the funds of protesters without due process.

The seizure evasion will miss big headlines, but the significance of it won’t be lost on the crypto community, for whom the very notion of “freedom to transact” sits at the heart of basic citizens’ rights, and remains one of the foundational ideas behind crypto.

Watching it play out in the real world is an ideological (and practical!) win for the space.

Ethereum’s value proposition on the rise

Has Bloomberg been reading Crypto Banter?

Following on from yesterday’s story about ETH 2.0, the Bloomberg Terminal put ETH front and center this morning, suggesting that, according to the Discounted Cash Flow (DCF) model, the Ethereum network is massively undervalued.

The traditional markets continue to rip to the upside despite Jerome Powell’s hawkish stance in yesterday’s speech, and crude oil (BRENT) pauses its recent rally and slides -1.94% to US$111.00 a barrel.

Bitcoin (BTC) rose to a high of US$43.3k during the US trading session, finishing the day at US$42.3k. The combination of bullish traditional markets and positive narratives (legal tender adoptions, LFG purchasing US$125M BTC)  radiating in BTC has given it the fuel needed to continue a week of upside action.

The chart everyone is looking at ETH/BTC, which fell 0.56% due to bitcoin’s strength, but a breakout pattern has transpired.

Ethereum Classic (ETC) rose 83% in the previous week due to traders front-running the Ethereum merge. ETH miners are likely to transfer to ETC mining after the network moves to a proof-of-stake (PoS) consensus.

The ideas behind crypto play a central role in personal freedoms highlighted during the Canadian trucker protest. Additionally, they play a similar role for countries, such as El Salvador, looking to utilize permissionless technology to benefit the country. Watching the events play out in real-time is part of the lore and enjoyment of this space.

On a side note, the market has been giving off 2021 vibes lately but stay tuned in because we know how fast sentiment can change.