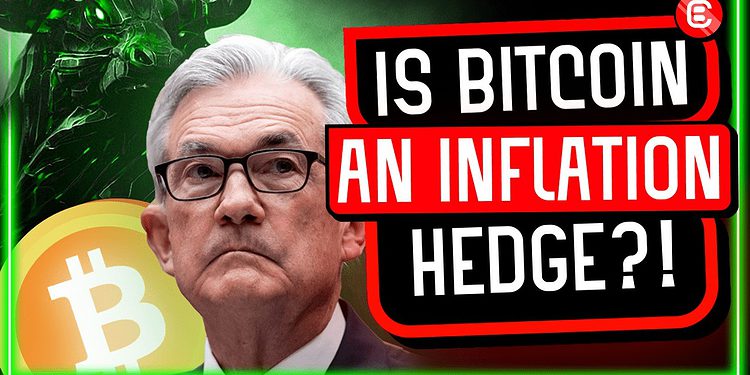 Are investors finally waking up to Bitcoin as the ultimate inflation hedge?

Today was the day all markets were waiting for, crypto and traditional alike. The Consumer Price Index (CPI) numbers are in, and as the Federal Reserve (FED) and the White House have been warning us for months, they are the highest Year-on-Year figures in decades.

Today was the day all markets were waiting for, crypto and traditional alike. The Consumer Price Index (CPI) numbers are in, and as the Federal Reserve (FED) and the White House have been warning us for months, they are the highest Year-on-Year figures in decades.

Most analysts were preparing for a 7.3% rise, however the actual figure that was printed is 7.5%, which is the fastest rising inflation the US has seen since 1982.

This is a summary of the basic data.

If you want to have a closer look at all the figures then head over to the US Bureau Of Labor And Statistics website.

As you may have heard, the way the CPI data has been calculated for 2022 actually differs from previous years. Let us not forget about all these warnings that the US government and the White House have been giving us.

With such CPI numbers coming in, might we see the FED rate hikes at their highest yet?

We have been on the edge of our seat waiting for the figures, and so has the market. So far Bitcoin seems to be having a negative reaction to the CPI data, with a -2.87% on its price within the first half hour after the CPI data print. But since rates as high as 7.3% were already expected, to what degree will these figures affect Bitcoin’s price action? After all, why would Bitcoin want to drop when we have so much data on how it may very well be the best hedge against inflation that the world has ever seen?

Let’s do a deep dive and examine this expertly researched thread on the macros of Bitcoin by BTCfuel, where he identifies a lot of useful key factors to consider when analyzing this asset’s future.

He explains that layer 3 is the Network adoption layer. This is the base on which Bitcoin’s price will steadily rise due to adoption, just like you would expect from any new tech.

The previous layer, layer 2, is the Investment layer, which is made up of all the reasons for which an entity would invest in Bitcoin. And as it stands right now, the main use case for Bitcoin is to be a better version of gold and act as a hedge against inflation amongst other things.

You may have read our recent post about how Bitcoin may be in the Goldilocks zone for buying, and as great minds think alike, BTCfuel is aligned with that thesis on many levels.

Indeed, BTCfuel dives in to compare gold and Bitcoin. His findings show major similarities in the way that the two act during bear markets, as well as at times when the markets fear oncoming inflation. Markets are comfortable with inflation sitting in the 1-3% range, and more capital seems to be deployed into gold and Bitcoin when inflation is higher.

Next, he focuses on adoption. Below, we see the adoption curve of new technologies. Bitcoin is tech, and to the surprise of some, gold has also been viewed as tech in the past, which is why it is crucial to consider this chart.

So, based on our thesis, we have already been through the “Facing Reality” phase of the cycle, and we are now awaiting the “Liftoff to Ultimate Market Opportunity” phase.

An interesting point that BTCfuel found when applying the curve to Bitcoin is that the leading cryptocurrency may very well have been within the Liftoff zone since 2013, just like gold was in 1999-2011.

He then goes on to look at how the 2017 Bitcoin drop was not due to Bitcoin fundamentals but actually more due to an assortment of other factors.

Continuing, he analyzes the macro tops and bottoms of Bitcoin’s price, finding that the next Bitcoin low could come in 2023-2024, and then the next high in 2026-2027. Bitcoin’s price seems to be perfectly in tune with gold’s price movement of the past.

These timelines may come as a shock to some. If that is the case, then you most likely fall within the category of a trader rather than an investor. Commenting on investment time frames, Michael Saylor once said that 4 years is considered short-term, mid-term 10 years, and the perfect time frame is forever.

We usually see parabolic price rises start when the news outlets see the amazing green candles, and they all start reporting on it. This causes a Bitcoin “gold rush” as BTCfuel says. You can read more about how this comes to be, and how to identify these news cycle shifts in our article all about “How to become the ultimate crypto cyclist”.

Right now, institutions are looking at investing long-term, and since they are the ones with the big money, they may be killing off the Bitcoin cycles we have come to know up until today.

BTCfuel points to the potential beginning of the hedge-against-inflation era Bitcoin now finds itself in as of 2016. However, many investors had the same idea, driving the price up too swiftly, thus enticing the initial investors to sell to make a nice profit.

He then looks at the early days of Bitcoin to see how it acted just as one would expect from a blue-chip asset. In 2013, lots of the profits investors had bagged from silver and gold flowed into this crypto asset, making it decouple from these precious metal commodities in the process.

BTCfuel rounds up his thoughts and describes his dedication to the chart below.

All in all, it seems that Bitcoin might be on its way to taking over gold, and indeed becoming the leading hedge against inflation.

Things are not always what they seem

So, the entire market was talking about how the CPI numbers would affect the market, and they have slightly. But to a large degree, even the worst-case scenario of the CPI number data had been potentially priced in since November 2021. What has not yet been priced in, however, is a best-case scenario, in which we have potentially already seen the peak of rising inflation. If that is the case, and we now start seeing the US and global economies shedding off their inflation percentages, then we are in for a bright future.

After all, it seems that 8 out of 10 times, market analysts overshot their estimations on what the CPI numbers would come in at. So, what are the chances that next time around they overshoot them? It may be the case most times, but we are here, watching and learning together.

We at Crypto Banter are bullish short-term, mid-term and long-term. Does this mean that in the very short-term we won’t have a price drop? Of course not. We may have slight fluctuations and volatility, while the market and those who acted too soon adjust to the actual CPI data. But all signs is pointing to one definitive future: Bitcoin is the new hedge against inflation, even if the entire world doesn’t yet know it.