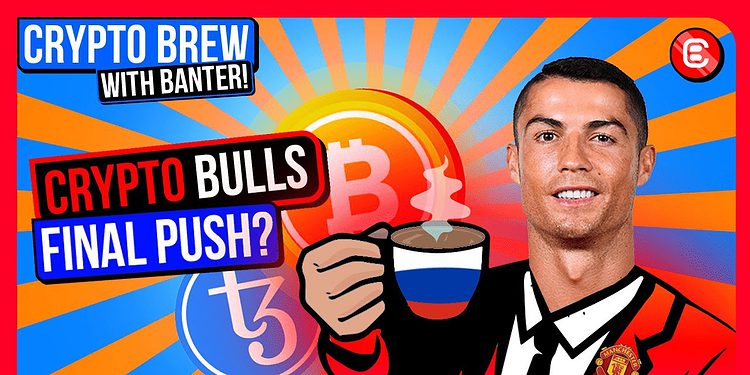 Are the crypto bears about to be punished?

As one of the biggest football clubs in the world partners with a blockchain, it looks like every crypto project wants to score a team of their own. Did your favorite sports club make the cut?

As one of the biggest football clubs in the world partners with a blockchain, it looks like every crypto project wants to score a team of their own. Did your favorite sports club make the cut?

In other news, all eyes are on the Super Bowl as crypto exchanges spend millions on TV ads. Russia could be winding down its anti-crypto stance, while UST domination continues…

All this and much more…

Are the top bears flipping bullish?

Bitcoin failed to break the $39k mark again, but some of the top traders in this space have been tweeting some hopeful possibilities. Slowly and steadily, investors could be regaining that bullish confidence.

Pentoshi’s ‘bera watch’ could be coming to an end:

This very smart contractor is paying attention to a potential higher low:

Even Gareth Soloway is expecting some upside. It doesn’t get more bullish than that!

UST, the stablecoin of the Terra ecosystem continued its journey of global adoption as Pangolin, the DEX (Decentralized Exchange) on the Avalanche blockchain made UST its default stablecoin.

This comes after a news-filled month for Terra, with the UST peg coming up against serious volatility, and rumours swirling about a potential partnership with a top tier sports team in the USA. Now that the de-peg FUD has been put to bed, the future looks bright for UST.

Is Putin a secret degen?

After the Russian Central Bank proposed a blanket ban on crypto, the Russian Finance Ministry expressed their interest in regulation (rather than a blanket ban), and with Putin’s stamp of approval on regulating crypto, we all know what’s going to happen there. This is Putin we are talking about.

As more and more crypto projects continue to partner with sports clubs for mainstream media visibility, the newest kid on the block is Tezos.

Manchester United have agreed a sponsorship deal worth over £20m a year for blockchain platform Tezos to become the club’s new training kit sponsor.

This is one of the first (and certainly most significant!) partnerships with a Premier League club. Until now, most crypto project partnerships been with sports teams based in the USA.

The Super Bowl is the annual championship game of the National Football League (NFL). It is among the world’s most-watched single sporting events, and frequently commands the largest audience among all American broadcasts during the year. It comes second only to the UEFA Champions League final as being the most watched annual sporting event worldwide.

So, it’s pretty obvious that companies around the world fight tooth and nail to get an advertisement spot during Super Bowl commercials. This year, it’s all about crypto, and while companies like FTX, Crypto.com and Bitbuy likely spent millions to get these ads, Binance CEO Chanpeng Zhao (CZ) advised all viewers to be responsible before getting into crypto.

The market is moving sideways, but confidence is brewing, and with Bitcoin continuing to test resistance, don’t be surprised to see some action this weekend! Zooming out away from the charts, leading blockchain companies continue to stamp their brand over the sporting world, while countries like India, Turkey and Russia are slowly shifting away from their draconian anti-crypto stance.