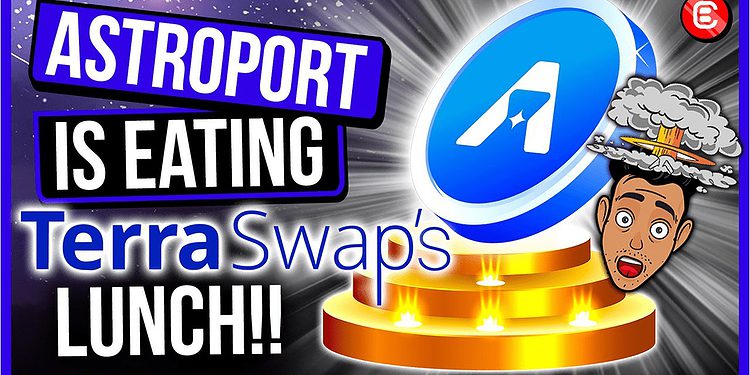 Astroport vs Terraswap: who will win the battle of the LUNAtics?

Terra’s rise over the past 12 months has been no less than meteoric. But the ecosystem is still in its infancy - we’re yet to see a full-blown decentralized exchange (DEX) in all its degen glory!

Terra’s rise over the past 12 months has been no less than meteoric. But the ecosystem is still in its infancy – we’re yet to see a full-blown decentralized exchange (DEX) in all its degen glory!

The battle has commenced. Astroport is coming for Terraswap. And the issue is stoking division in the community!

But this disgruntled LUNAtic is missing the point. No upside? Astroport says: hold my beer!

Terraswap was the first DEX on the Terra chain. It was built with a simple application in mind – providing liquidity and facilitating trade of synthetic assets on Mirror Protocol. As the name suggests, it’s great if you want to swap one token for another: it’s simple, easy to use, and boasts a high-quality user experience.

But when it comes to the full-suite of DeFi use-cases you might see on Solana, Ethereum, or AVAX, Terraswap is a very bare-bones application – a skeleton DEX!

How to compete in the age of DeFi

A DEX has to offer a range of benefits and features, beautifully summed up by John Wang as the Holy Trinity for a god-tier protocol, if it wants to compete at the cutting edge of DeFi’s endless possibilities. Terraswap is good at what it does, but it isn’t enough to compete with the top dogs in DeFi.

Terraswap doesn’t even have a token! A DEX needs a token to determine Automated Market Maker (AMM) dynamics and reward processes. ASTRO solves this.

If the Terraswap loyalists are guilty of anything, then, it’s short-sightedness.

A fully-optimized DEX is crucial for DeFi to thrive on any blockchain, which is why Astroport is stepping up to fill the void, and generate the kind of deep liquidity required for a fully-fledged AMM. Think of it as Terraswap 2.0 (not literally, there’s a different team behind it!).

It does everything Terraswap could do and all the things it couldn’t, expressly designed and built to meet the needs of a frontline DEX at the heart of the Terra ecosystem. Just check out this official Twitter thread explaining how Astroport’s incredible interface will raise the bar!

So why has it proved controversial?

Terra users are familiar with the processes, interface, and user experience of Terraswap. Some of them aren’t too thrilled to see their favorite liquidity pools being migrated across to Astroport – they just don’t see the benefit because they’re not seeing the bigger picture.

Know who is, though? The gigabrained chad that is Jose Macedo! Astroport has major venture capital backing from Delphi Digital (under Jose’s leadership!) which has driven a lot of the liquidity migration on some of the top protocols from Terraswap to pastures new.

Astroport will be rolling out major upgrades and improvements in functionality, bootstrapping, and rewards across the year. As far as we’re concerned, it’s the DeFi equivalent of Mike Tyson stepping into the ring with Macauley Culkin. In 1996!

And with so many Terra protocols having already migrated their liquidity pools to Astroport, it seems unlikely – if not impossible – for Terraswap to win this one.

A leading chain needs a full stack DEX with deep and diverse liquidity pools. Astroport has an incredible stack in its road map. In the end, it emerges as the top dog because of higher liquidity, huge developer support, higher rewards potential and a forward looking strategy.

Yes, there will be teething issues (like with all new projects). But the bigger picture is important here. If you’re interested in earning rewards on Terra (and supporting the future of the chain), adding to an Astroport liquidity pool is a great move. Just set up a pool on Anchor protocol, and add the LP token to Astroport!