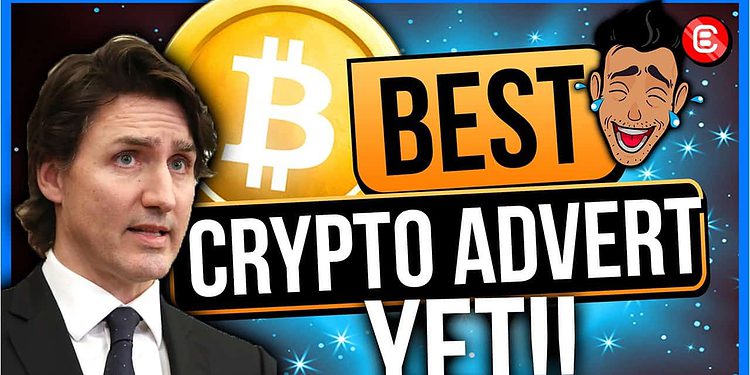 What a few days it has been for (positive) crypto publicity.

What a few days it has been for (positive) crypto publicity.

Sunday brought us the Super Bowl, with multi-million dollar commercials beaming in from some of the blockchain industry’s leading platforms.

Then, Monday came around, and Bitcoin received some free advertising from an unwitting and highly effective marketing department: the Canadian government.

Meanwhile, the continuing Russia/Ukraine tensions are only bolstering the “Bitcoin as a store of value” narrative, as investors begin thinking about which assets could provide the best “disaster hedge” should things escalate, even though they probably won’t.

Whether they’re trying to promote crypto adoption or clamp down on it, the results are the same: This week has been the ultimate crypto advertising campaign!

Satoshi never spent a dime on marketing, precisely because he/she/they didn’t need to.

On Sunday, the crypto industry made a statement, shouting its intentions from the rooftops during the Super Bowl to over 100 million viewers. In case you missed them, check out our article here!

According to AdWeek, FTX and Coinbase generated the most buzz on Twitter, with over 300,000 and 134,000 tweets generated respectively.

The data doesn’t lie: crypto absolutely dominated the Twittersphere over the weekend.

Still., our favorite tweet came from @POTUS himself, who appeared to be watching a different broadcast entirely.

Monday: Canada clamps down (and shoots itself in the foot)

Even when they try to crush it, the powers that be can’t help but add fuel to the fire.

With its announcement of the Emergency Act (in response to the truckers’ Freedom Convoy), the Canadian government has granted itself unprecedented powers to limit freedom of movement, seize private property, cut off funds where it sees fit (including digital assets…) and to direct businesses to suspend services to particular groups.

Trudeau has said the Freedom Convoy movement is no longer a lawful protest, but rather an illegal occupation, hence the pretext for the overarching powers of the Emergency Act.

This comes in the wake of the recent GoFundMe debacle, which saw an overzealous Canadian government order the funding platform to freeze donations to the trucker movement (and distribute them elsewhere). Unsurprisingly for a centralized platform, GoFundMe gave in to these demands with seemingly little resistance.

However, this capitulation provided the opportunity for rival platforms to come to the fore. As of today, the HonkHonk Hodle group has raised over 22 Bitcoin – donations that can’t be seized or frozen by the powers that be.

What does this all mean? Even (and especially!) when countries attempt to clamp down on crypto in the name of “national security”, they only strengthen the very case they’re trying to destroy.

It may just be a coincidence, but Bitcoin’s price action suggests that the world is paying attention:

The US/Russia/Ukraine situation heats up

We don’t proclaim to be geopolitical experts here at Crypto Banter, but neither do we ignore the key narratives affecting global markets.

The US and its media outlets seem to be pushing a narrative of imminent war. And we have to wonder: Is this an attempt to cool down the markets, considering the Consumer Price Index (CPI) data hanging over the administration’s head.

Either way, Russia doesn’t seem to be taking the bait, and neither the potential aggressors, nor Ukraine itself, appear to share the US’s view that an invasion is unavoidable.

In spite of the Fear, Uncertainty and Doubt (FUD), Bitcoin has shown tremendous strength. Investors haven’t been selling in the face of a potential conflict, quite the opposite actually: the Bitcoin price has been going up.

What’s more, with all this confusion, and the US seemingly pushing a narrative for its own benefit, the case for crypto adoption is only cemented: Everyone from nation states, companies and individuals are looking to tap out of the old system – governed by the economic forces of petrodollars and the dollar as the global reserve currency – and they will all be looking to a decentralized, permissionless money system as the ultimate escape from of the archaic monetary policies and systems.

Here’s the thing about Bitcoin and the crypto movement: Whether they’re trying to clamp down or promote it, everyone ends up advertising the merits of crypto and decentralization.

So, while we want to thank the Canadian government for its contribution to the cause this week, let’s not forget about the community working relentlessly to actively promote it too.

Michael Saylor has become the self-appointed Chief Marketing Officer of Bitcoin, and few would argue against his incredible contribution to the space.

But this comes down to the grassroots too: people like us, like you, regular citizens spending each family function preaching about crypto to their siblings, parents and grandparents, and taking to Twitter on a daily basis to evangelize this disruptive technology.

Crypto articles now fall into the top 10 publications on Medium, as investors share their thoughts, tips and how-to guides to an audience hungry to learn about this new economy.

It all amounts to a viral marketing campaign which is designed, funded and run by a passionate community of supporters and naysayers!

As much as Justin Trudeau would like to believe otherwise, it’s unstoppable.

The Bitcoin marketing campaign is playing out exactly as Satoshi might have envisaged. As Michael Saylor would say, the cyber hornets have been released into cyberspace.

Governments will always attempt to suppress disruptive technology, but in this case, we believe they will be forced to discover a change of heart. Swimming against the crypto tide is exhausting, and it ultimately leads nowhere. In the meantime, the old adage that, “there is no such thing as bad publicity”, appears truer than ever.

Blockchain technology is proving to be like the Hydra of Greek mythology: try to cut off its head, and ten grow in its place. Try to make it look bad, and you just do the opposite!