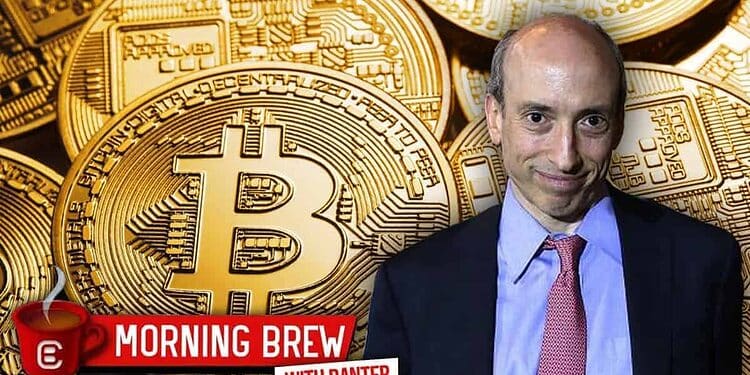 BTC flexing its muscles as altcoins prepare for lift-off

Gary Gensler receives legal threats from Grayscale over the spot-bitcoin exchange-traded funds (ETF). Meanwhile, bitcoin consolidates above US$46k, altcoins are showing some punch, and the yield curve might be flashing a fearsome warning sign to the markets.

Gary Gensler receives legal threats from Grayscale over the spot-bitcoin exchange-traded funds (ETF). Meanwhile, bitcoin consolidates above US$46k, altcoins are showing some punch, and the yield curve might be flashing a fearsome warning sign to the markets.

All that and more!

A worrisome indicator has emerged in the bond markets. The 2/10 year bond yields sit on the brink of inversion, which typically precedes a recession. According to economists, an inversion predicted the past eight recessions but, on average, takes 17 months for a downturn to begin — the 5/10 curve inverted during the US trading session Monday.

According to CoinShares, investment products saw an inflow of US$193 million last week, the largest since December 2021. According to the report, a majority came from Europe at US$147 million.

Bitcoin (BTC) ran through the US$45,000 resistance and past one at US$47,000, which saw US$355 million worth of leverage shorts liquidated in 48 hours. The relative strength index (RSI) on the 4-hour chart below entered the oversold area. A test of US$45,000 as support would not be out of the question at these heightened levels and would help sustain the newly forming uptrend.

FTM/BTC ratio nears a point with the recent drawdown in FTM after the departure of Andre Cronje. The previous break of such a downtrend led to a gain of +138% in FTM over BTC.

Dubai pushes to become Crypto capital. Crypto.com (CRO) and Bybit announce offices in Dubai as the UAE further exerts to become the center for digital assets. In addition, last week, Binance and FTX announced hubs in the UAE.

One wallet to rule them all. MetaMask Mobile recently released Mobile V4.3.1, which contains integrations with Visa, Mastercard and ApplePay support.

The return of bitcoin mining in Russia. Deputy Minister of Energy, Evgeny Grabnchak, proposes retracting the ban on bitcoin mining which was announced by the Central Bank of Russia (ECB) in January.

Coinbase makes moves in South America. According to reports, Coinbase is near the acquisition of Brazil’s largest crypto exchange, 2TM, the parent company of Mercado Libre, the largest e-commerce platform in South America.

Grayscale puts on the gloves. According to Bloomberg, Grayscale has stated that if the Securities and Exchange Commission (SEC) rejects the bid for a spot bitcoin ETF set for a final decision on July 6, Grayscale will begin legal proceedings.

Don’t take the threat by Grayscale lightly; everybody wants a spot-bitcoin ETF, but the SEC continues to defer. Gary Gensler and the SEC have an underlying plan, but the entire process could prove unlawful. US Institutions desire exposure to bitcoin, which currently is only available through a future-based ETF. With institutional exposure, a spot-bitcoin ETF could send crypto markets into a buying frenzy. The threat stands, either an ETF is approved, or a well-backed court case will likely ensue. The plot thickens, and the ball is in Gary Gensler’s court.