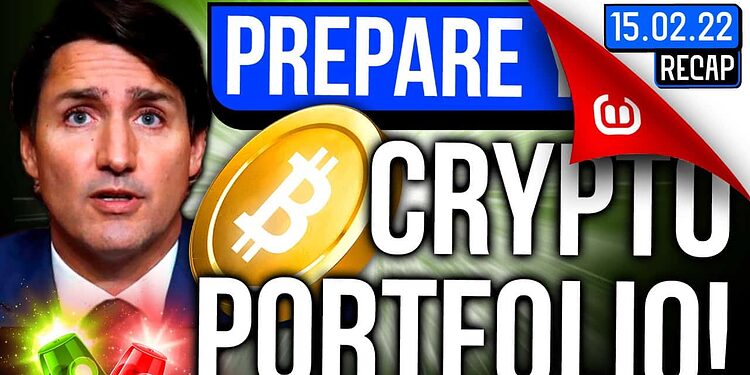 Building the perfect crypto portfolio for the new market cycle

Building a well-rounded portfolio requires preparation. On today's show, Ran assisted in the development of a guide to help you get ready for what's to come.

The market is showing signs of strength and is gaining pace to break over the overhead resistance. We want you to be fully prepared for the new crypto cycle with a refined crypto portfolio.

Building a well-rounded portfolio requires remarkable dexterity. On today’s show, Ran assisted in the development of a guide to help you get ready for what’s to come.

Bitcoin is gaining ground thanks to the Crypto Bowl

Contrary to popular assumption, BTC has taken a new swing to the upside courtesy of the biggest advertising week for Bitcoin, which has seen a retest under the $40k territory after being denied at $45k resistance.

The Super Bowl, which captivated the attention of over 117 million people, featured six cryptocurrency advertisements, all of which were successful, particularly the Coinbase ads, which had a whopping 20 million views just in the first minute after going online.

The announcement by Canada’s Deputy Prime Minister and Minister of Finance, Chrystia Freeland, that the government is broadening the scope of the country’s financing laws to include cryptocurrencies, ironically turned out to be bullish for Bitcoin, as the press release preceded yesterday’s market rally.

Another reason why people need Bitcoin is the Canadian government’s recent decision to shut off funding for demonstrations.

The Canadian government’s move isn’t the only example of Bitcoin’s wide acceptance; the SEC’s case against crypto lending company BlockFi is also noteworthy.

In a settlement with the Securities and Exchange Commission (SEC), BlockFi will pay the SEC $100 million to resolve charges that the firm broke securities laws with its interest account offering.

The SEC is punishing an American company which offers interest rates above inflation rates, allowing people to hedge their investments against inflation. This is yet another reason to invest in crypto.

BlockFi now has to work with the Securities and Exchange Commission to get their products and services approved, and the deployment will signal the end of the traditional financial banking system.

Co-founder of 3AC (Three Arrows Capital), Zhu Su, eloquently summed up the transition from the old financial system to new-age FinTech (financial technology) in a tweet.

Another piece of news that came yesterday from the US media was Russia’s impending invasion of Ukraine, which has sparked a flurry of debates ever since.

The Western media is undoubtedly inflating the threat of an assault, with other tales following, including video footage, scaring the public into believing an attack was imminent, all of which were bluffs.

Volodymyr Zelensky, President of Ukraine, answered by being humorous rather than literal, saying: “February 16th will be the day of the attack.”

The tension between Russia and Ukraine has subsided, and the market appears to be entering a new phase. Both the Federal Reserve (Fed) raising interest rates and Russia invading Ukraine have already been priced in, and the possibility that neither of these scenarios will play out is a huge positive for the market, as the S&P 500 futures are up more than 1%.

It’s time to start working on your portfolio

Many individuals are watching from the sidelines, oblivious to the fact that they are missing the big picture. Technically, Bitcoin has broken past downward resistance, signaling the start of a new cycle, similar to the one which began in July, when Bitcoin finally broke the downward trend before rising to the upside.

Entering the market when everything is already pumping means your upside is limited, but if you enter on a breakout (like now) into safe coins, you can get a significant proportion of the market rally, and a hypothetical correction is simply a delay in portfolio growth.

It’s difficult to pick a bottom, but when the trend is broken, it’s a good sign that the trend is changing. Then you may plan and get in accordingly.

The supply of stablecoins oscillates between a positive and negative spectrum, and on-chain data indicates that when the stablecoin supply ratio is at its lowest, there is an accumulation period before a major spike.

Bitcoin is currently positioned halfway between the trend’s top and bottom. The price is 30% below the trend high of $69k and around 35% above the trend low of $33k.

One of the positive signals is that Bitcoin is reacting to the FUD and news extremely differently, indicating that we are in an investable bull cycle.

The market is currently bullish because it is trending upwards (bull cycle), and despite all of the negative news circulating at the moment, such as the Russia/Ukraine conflict, the Fed’s potential interest rate decision due to inflation, and Canada’s condemnation of cryptocurrencies, Bitcoin is holding strong and killing it.

This is an excellent opportunity to dollar-cost average into attractive tokens which offer the highest upside potential, while also surviving and holding strong in the event that the market falls.

One of the reasons you should invest is to consider macroeconomic variables, because the unit of measure of asset value (the dollar) continues to lose value, as described in the tweet below.

This is why, as you construct your portfolio, you should deploy your cash in a systematic manner. The stages to creating a portfolio are outlined here.

The next stage is to choose the narratives which you believe will win, and then examine the best tokens that fit into the selected categories.

The best narratives to take a look at

Do you require help in determining which narratives to pursue? Here are five carefully chosen narratives that you should explore.

The store-of-value, anti-inflation hedge, risk-off asset narrative is at the top of the heap, and Bitcoin is the best bet, since well-informed people already recognize it as the actual risk-off asset of the globe.

The Layer-1 story is the next one to look at, since there will be an insatiable demand for smart contract infrastructures, making Layer-1s a good investment.

The next narrative is decentralized finance (DeFi), specifically institutional DeFi, because interest rates increase and inflation is rising, which implies that institutional players will be looking for places to store their money in order to protect themselves from economic variables.

The strategy is to get ahead of them and begin investing in potential winners like LUNA ecosystem projects, such as Anchor Protocol, Qredo, Spool and many others.

Another narrative you should be looking at is privacy. This is because every day, we are reminded why privacy is important. Our suggestions of some of the projects to take a look at are Tornado Cash, Secret Network and possibly THORChain because of its decentralized nature.

No-one can anticipate what will happen to the market, and we may be mistaken in thinking that the worst is over and that the market will continue to fall. That is why you should invest in tokens which will make a comeback when the market turns around, and possibly lead the recovery.