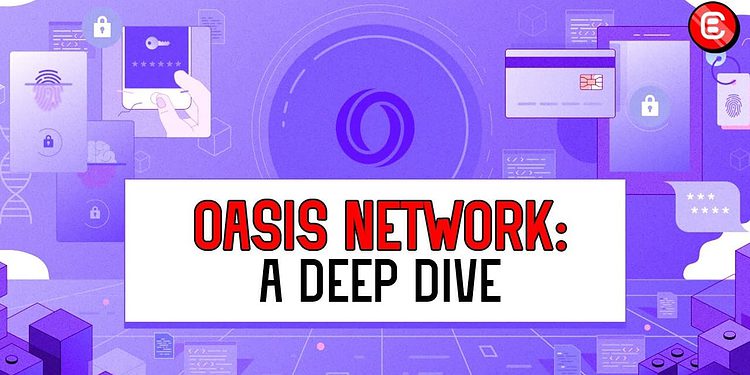 Built using the Cosmos SDK and backed by a16z, this network is blooming; here’s why

I last wrote about the Oasis Network back in March 2021. The article was titled “A Rose on the Rise: A Quiet Crypto Contender”. At the time, the native cryptocurrency, Rose, was hovering around the $0.2 mark. By November 2021, and in a matter of 8 months, the price had more than doubled to $0.41

This article was contributed by Alex Boyd

I last wrote about the Oasis Network back in March 2021. The article was titled “A Rose on the Rise: A Quiet Crypto Contender”. At the time, the native cryptocurrency, Rose, was hovering around the $0.2 mark. By November 2021, and in a matter of 8 months, the price had more than doubled to $0.41 (as shown in the below chart). Then, along with the rest of the crypto market-wide bullish surge, an all-time high was recorded on January 15, 2022 — $0.6.

Naturally, this exciting price action prompted some questions — I found myself thinking about why I was initially drawn to the Oasis Network in the first place. Here are some of the factors that had caught my attention:

Why did I think that Rose was on the rise? Fast-forward a year to 2022, I figured it was time to write an update article and delve into the following:

How does the Oasis blockchain work?

This section is for the blockchain geeks out there. For those of you who are newer to crypto or simply fancy a refresher on some of the jargon, I’ve made a point to expand on some of the more technical terms.

What is the Oasis Network?

The Oasis Network is a Layer-1, privacy-focused, proof-of-stake, smart-contract blockchain which is built using the Cosmos SDK. Let’s unpack these terms.

Layer-1: A base layer blockchain like Bitcoin, Ethereum, or Terra.

Privacy-focused: Unlike Ethereum where all transactions are publicly available, on the Oasis blockchain, it’s possible to shield transactions/computations so that users and applications are always in confidentiality mode.

Proof-of-stake: This describes a type of consensus mechanism (i.e. a way to validate transactions). In proof-of-stake, validators stake tokens to secure the network and earn rewards.

The consensus layer is separated from the contract execution layer (ParaTime Layer). There is a built-in interface connecting the two layers for privacy-preserving computation.

Similar to Polkadot, the two layers allow for many computational environments called ParaTimes to exist in parallel — each communicating their own transactions to the Consensus Layer.

The Consensus layer is a scalable, high-throughput, secure, proof-of-stake consensus run by a decentralized set of validator nodes. This layer focuses on blockchain security and scalability, primarily concerned with the enforcement of network rules.

The ParaTime layer is where applications run their computations. It is versatile and flexible in order to support different computational environments. This means that each ParaTime can implement its own logic. For example, what transactions look like and how data is stored can be different for each ParaTime.

Let’s look at an example of a ParaTime. The above image shows “Emerald” the EVM (Ethereum Virtual Machine) compatible ParaTime. The benefit of this compatibility is easy integration with EVM-based dApps (decentralized apps) and >1000x lower fees than Ethereum. It is also somewhat decentralized with 56 Oasis validator nodes. Ethereum is a considerable leader in the smart-contract arena and compatibility with Ethereum’s network is crucial to optimize users, liquidity and marketability.

Since Oasis was built using the Cosmos SDK, it will eventually be able to connect to the broader ecosystem of Cosmos-enabled chains (called zones) using the IBC (Inter Blockchain Communication). The IBC can be thought of as TCP/IP (the protocol that enables the internet to function) but for a network of independent blockchains. This is exciting because the Cosmos network is growing rapidly bringing a wealth of new users and liquidity — some of which are likely to use Oasis for its privacy offering.

In his recent article, Haseeb Quereshi (Managing Partner of Dragonfly Capital) wrote that one of the ways that blockchains are going to be able to scale in the future is through “interoperability networks” — like Cosmos. A pattern is emerging where high-quality blockchains choose to be part of the Cosmos network due to its interoperability characteristic.

A quick look at the tokenomics

Rose is the native token of the Oasis Network blockchain. It has three main utilities:

The maximum supply of the ROSE token is 10 billion. This supply will be distributed among 6 groups of people over time:

What is the network’s ultimate use case?

I recently wrote an article on a privacy application called ‘Void Protocol’, the importance of privacy, and why it is not open to discussion.

Here’s a snippet from it:

Privacy is a fundamental human right (laid down by the UN), essential to autonomy and the protection of human dignity, serving as the foundation upon which many other human rights are built.

A society where privacy is absent is a society where power imbalances thrive. Inevitably, certain groups can either monetize or weaponize your data as occurred in the two recent geopolitical events (Canada and Russia), leading to an invasion of financial privacy.

It is your choice whether you control your financial data.

Now, back to Oasis and how it enables privacy as a design principle.

A TEE is simply an impenetrable black box, where computation is carried out. For example, if a user interacts with an application and issues a transaction, this transaction request and the user’s data will be sent into the TEE for computation. No developer or validator can see what goes on inside the TEE and so there is no data spill. When the computation finishes, the data is encrypted and sent for validation (addition into the blockchain).

It’s important to note that Oasis is able to achieve this partly due to its low number of validators (110 in total — by virtue of the Cosmos Tendermint design) in comparison to Ethereum V2 with >200K. That said, some projects/users may not mind this so long as the blockchain is immutable and the cost of manipulating it is high enough to discourage bad actors.

At the time of writing the total staked value was $1.2B, which means a bad actor would need to acquire more than a billion dollars’ worth of Rose to even have a chance at corrupting the network (which is an extremely slim chance due to misbehaving validators getting their tokens slashed).

Essentially, the Oasis Network’s unique selling point (USP) is that it offers versatility (you can build both permissioned and permissionless ParaTimes), built-in privacy and instant finality.

A permissioned blockchain requires user approval to join and is generally used for enterprise purposes, whereas a permissionless blockchain is used for public purposes that require less transparency and control.

Instant finality is quite a strong USP. Finality is the assurance or guarantee that cryptocurrency transactions cannot be altered, reversed, or canceled after they are completed.

To put this into perspective, if you were to have to wait for 10 minutes every time you wished to purchase anything, it would quickly become very inconvenient to go shopping. Also, in the financial sector, companies need to know, within the shortest possible time frame whether they own certain assets.

Given, the Oasis network can offer instant finality and has the option for permissioned blockchains, it makes the blockchain practical and usable by enterprises.

There is no surprise then to see Oasis has commercial relationships with companies such as BMW and Nebula Genomics.

From a trend perspective, the privacy narrative will provide fertile ground for the Oasis Network to blossom in the coming months/years.

To reiterate, from an institutional perspective, the Rose token was the second most commonly held digital asset at the end of Q4 2021. There is clearly something unique about this project (acknowledged by smart money).

If you’re reading this, you’re still early in the game. Given the international ambassador team, global partnerships, huge financial resources and sound technology — it seems likely that the Rose token is going to keep on rising.

This article was contributed by Alex Boyd