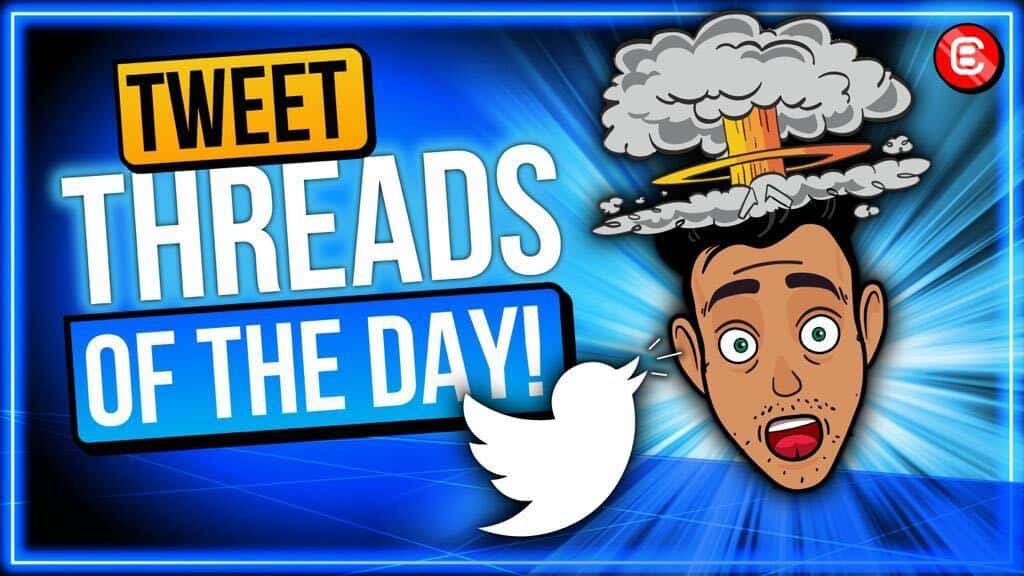 Check out our top tweets of the day!

Hidden gems often present themselves in the most unlikely of places. Twitter provides the platform for experts and novices alike to tell the world what they think.

The people have spoken

Hidden gems often present themselves in the most unlikely of places. Twitter provides the platform for experts and novices alike to tell the world what they think. We’ve all got our favorite accounts to follow, but you’d be surprised what you can uncover when you look further afield.

Whether it’s the next 1000x moonshot, a detailed analysis of the macro-economic landscape, or even just a bit of satirical fun, people just want to be heard. And for the most part, we should be listening!

It’s true, people will ‘talk their own book’. If they are long BTC, they’re going to want to read news that tells them that BTC is going up. It’s confirmation bias! But sometimes, you need to take a step back to drown out the noise: you might just hear something valuable.

Regulators are coming! Buckle up.

Mild panic has been setting in with regards to the imminent regulation of crypto assets. The crypto community, of course, will argue that the decentralized nature of crypto is at the heart of its code, and any disruption to that changes it beyond recognition.

Is it such a bad thing though? Won’t regulation open it up to the world and provide the catalyst to mass adoption? Blockchain Backer provides a great thread and shines a light on the situation for us.

A series of articles have set the ball rolling (and caught the attention of the crypto world). Throughout last week, Bloomberg, Barron’s and ZeroHedge all reported on the White House’s plans to regulate crypto.

They used the phrase ‘as a matter of national security’. Huh? Their sensationalist choice of language turned more than a few heads (ours included!). But don’t panic. Blockchain Backer puts together a comprehensive list of reasons why we shouldn’t be worried.

A great point well spotted. After all, media companies do have a way with words. Also worth considering when trying to link falling prices to the regulatory FUD is that prices, and sentiment, were on the decline long before this story went to press.

So what’s really going on, Mr Biden? Some might say that the current administration is facing a few popularity issues, and this may be a way of setting a narrative that allows ‘Sleepy’ Joe Biden to emerge as a conquering hero. Surely not!

Whether Blockchain Backer is proven right or not, his argument is well thought out (and totally viable). So what is really going on?

It’s a well-presented thread and well worth five minutes of your time. Maybe not the most obvious way to look at the regulatory news, but this contrarian angle certainly makes sense and has plenty of merit.

Let’s talk about our own book for a while

A picture paints a thousand words. @Carnagecrypto gives us a brief bit of technical analysis for our BTC HODL position. While we have seen the most complicated of charts (complete with detailed supports and resistances, stochastic RSIs, and moving averages) all analyzing BTC and equity markets with painstaking detail, sometimes the answer lies in a little rectangle.

Twitter is full of information-dense charts and of course the information they provide is invaluable. That doesn’t mean a simpler version can’t point to the same conclusion, especially when there is a sound narrative to support it.

For all those new to crypto who may be underwater right now, how’s this for a nice, comforting thread about how all is still healthy in cryptoland?

Depending on what side of the fence you’re sitting, you may have a strong opinion on the efficiencies of BTC compared to Visa as a means of settling transactions. The truth is, one doesn’t have to be better than the other, they just both need to work.

This thread from @yassineARK is interesting more so for its replies as they certainly divide opinion.

Will Clemente got involved but was quickly shut down.

Then the cavalry arrived, and the debate continued!

It’s a debate with neither a conclusion nor a winner, but grab yourself a drink and dust off the old popcorn machine – it’s an entertaining read!

‘Don’t worry, it will bounce’. ‘Buy the dip!’. ‘The charts are looking great’. These are the kinds of phrases we hear every day while patiently waiting for a catalyst to jolt this market into life. However, as sentiment shifts lower, @ThinkingBitmex wants to know where the bulls are at!

Once again, it’s the replies that are fascinating. They cover the spectrum of a trader’s emotion, from fear, to anger, to optimism.

It may have been a tongue in cheek comment about it ‘being darkest before dawn’, but nevertheless, he may just be right!

Whilst we’ve looked at tweets and threads that have divided opinion, the final one has the crypto community coming together to form a united front against FUD, fake news and all those who think the party is over.

While investors are happy to hear about healthy corrections and inflationary concerns causing a short-term fall in prices, they draw the line regarding anything more sinister. Start talking about bear markets, and you will have a revolt on your hands. Bloomberg dared to publish a piece alluding to the ‘B’ word, and the community reacted in unison!

Cries of ‘FUD’ and ‘fake news’ resonated throughout the replies, and the phrases ‘crypto winter’ and ‘crypto ice age’ were banished from use.

The space is united in its outlook. Retracements are short-term and provide buying opportunities. Anything more deep-rooted will be met with indignation. If you need further confirmation that all is well, just bring up a BTC chart and scroll out. When in doubt… zoom out!

Everyone has the right to be heard. Until they don’t. Twitter gives us the platform to express an opinion (or comment on someone else’s opinion!). Whether it’s information-based or pure comedy, Twitter’s role in the crypto space (and beyond!) is invaluable. One thing’s for certain, though: the effort, brainpower, and resources behind some of the research is truly mind-blowing. If you’re willing to look, the amount of gems you’ll find there are staggering.