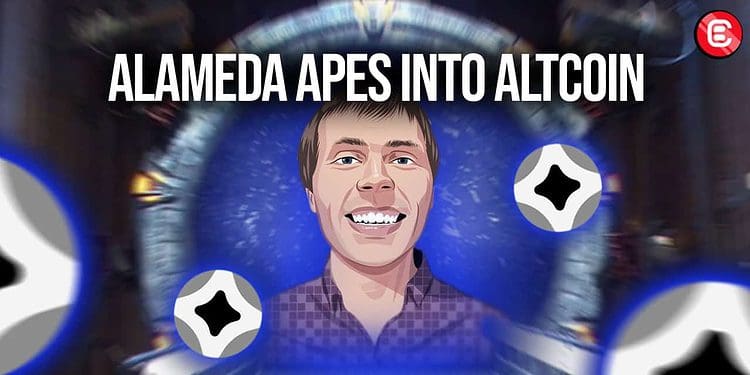 Could it be… One cross-chain protocol to rule them all?

So, what is Stargate? What problem does it aim it solve? And will the creation of a unified Omnichain really transform cross-chain functionality?

Today, you may have read that none other than Alameda Research has been aping into the project.

Suffice to say, the gigabrains at Alameda are bullish on this new protocol – Stargate – which claims to change the cross-chain game for good.

And it promises to bring us something totally now known as the “Omnichain”. Alameda is so excited, it bought up the majority of initial sale tokens.

So, what is Stargate? What problem does it aim it solve? And will the creation of a unified Omnichain really transform cross-chain functionality?

Stargate, created by LayerZero Labs, is a fully composable liquidity transport protocol that allows users and dApps to swap 1:1 native assets cross-chain, access the protocol’s unified liquidity pools, and benefit from instant and guaranteed finality. Through the combination of these unified liquidity pools and the innovative utilization of oracles in addition to relayer technology, Stargate is setting out to revolutionize the way we operate across different chains.

The protocol launched on March 17, and in only 6 days, it has amassed over US$2 billion in total value locked (TVL), which would position Stargate as a top ten decentralized finance (DeFi) project in a little under a week.

The smart money has been aping in.

Alameda Research, led by Sam Trabucco, was an early investor, having purchased all the STG tokens from Stargate’s initial token sale: That’s 100 million STG tokens, accounting for 10% of the total supply, which were auctioned off on launch day in order to raise liquidity for the seven blockchains intended for integration.

These seven chains are:

The Stargate team is also exploring integrations with Solana, Terra and Cosmos.

It’s worth pointing out that Sam Trabucco addressed the purchase in this thread of his on Twitter, stating that Alameda Research believed deeply in the project and its team, and that they did not intend to sell any of their tokens for at least 3 years.

Liquidity providers (LP) will be able to earn a stablecoin reward for every Stargate transfer, as well as having the ability to farm STG tokens.

STG token holders can also stake their tokens in order to receive Stargate’s native governance token, the veSTG. The longer they lock up their tokens, the more veSTG they will earn.

That’s what Stargate is, and what it does.

Why does Stargate stand out?

Stargate is not simply another bridge.

Its cross-chain composability will allow users and dApps to use assets cross-chain without having to bridge or use different chains’ wallets, thus enabling cross-chain features like lending, borrowing and farming, without ever having to leave your native chain.

In this thread of theirs, Kamikaz ΞTH compares a protocol adding $STG functionality as a computer connecting to the internet.

Imagine farming on Fantom, whilst remaining secure on the Ethereum chain. Bridging assets is always a risk, but perhaps one that we may not need to take for much longer.

Bridging can be complicated: LayerZero Labs wanted to make Stargate as simple to use as possible, allowing all the cross-chain functionality to occur in a few clicks.

This video is highly recommended. In it, LayerZero Labs CEO, Bryan Pellegrino, demonstrates the power of LayerZero – the protocol that Stargate is built on –  by completing a single transaction across two chains (Ropsten & Binance Smart Chain testnet) and 3 contracts (ETH, USDC, BNB) with ease.

It may be relatively simple, but that doesn’t mean the problem it aims to solve isn’t complex. Quite the opposite. Often the most challenging conundrums require the most elegant solutions.

Stargate solves the complex issue of the “Bridging Trilemma”, which developers are forced to sacrifice one of the below requirements in order to make their bridge work:

If you fancy some light reading, you can delve into the technical details in this excellent article by Ryan Zarick, Co-founder and CTO of LayerZero Labs.

For those who are less technically inclined, the long and short of it are as follows: If Stargate can deliver on its potential, it really could usher in a new, cross-chain DeFi era.

Speaking of DeFi protocols, SushiSwap co-founder 0xMaki has joined the Stargate team, with a proposal set forth for SushiSwap to integrate Stargate (which would increase their LP volume across seven different chains).

Stargate relies on an Oracle and Relayer combo for dual-layer security.

The max supply of STG is 1 billion tokens, with 70 million currently in circulation. Each month, 7 million new tokens will be released into circulation through LP rewards.

And there is an upcoming second Stargate community auction (taking place on 3/30/22 at 16:00 UTC) for anyone left hanging the first auction.

You can get more info here.

The potential is enormous: If Stargate can actually achieve what it’s setting out to do… well, let’s wait and see before making any predictions. We can’t say much more until this thing has been sufficiently battle-tested. On that basis, you’d be wise not to ape into this thing at the first available opportunity. Remember, the smart money got in at prices you won’t. Instead, we’d recommend you do your own research, and keep a close eye to see whether Stargate has some, as of yet, undiscovered flaws which need ironing out. What LayerZero Labs is trying to achieve here is far from easy!