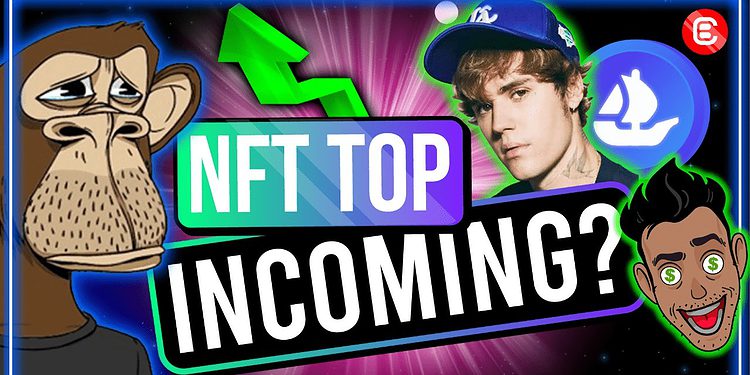 Could NFTs be the ultimate portfolio hedge? Or is the NFT top in?

NFTs have proven to be the most resilient and profitable crypto trend of 2022. Better said, blue-chip NFTs are being snapped up by the top 0.1%, leading people to believe NFTs represent the next epoch of digital trading.

NFTs have proven to be the most resilient and profitable crypto trend of 2022. Better said, blue-chip NFTs are being snapped up by the top 0.1%, leading people to believe NFTs represent the next epoch of digital trading. But even euphoric trends like NFTs are showing a change in narrative. Because even (and especially!) at their peak, anything can fall. And fall hard!

NFT collectibles are in the midst of a gold rush, much like the early 2017 ICO-craze, or the DeFi summer of 2020 (which kick-started an unforgettable bull rally). And NFT sales are dominating the market. OpenSea has flipped Uniswap as the most used dApp, and NFT-driven gas prices on Ethereum have reached a share of 19.20% in the last 24 hours.

What began as a new form of digital ownership could go in two directions: either a stunning decoupling from the rest of the market, or a brutal fall from fame! In the meantime, however, NFTs volumes are going parabolic.

Wherever you go, NFTs are the talk of the town. As we covered last week, sales have broken monthly records and are expected to reach a record $5 billion in January, 2022. Whoever first predicted NFTs would thrive under market uncertainty has surely cracked the code!

This goes beyond art. Blue-chip NFTs like CryptoPunks or Bored Apre Yacht Club (BAYC) are the ultimate digital flex, and they’re proving irresistible for the rich and famous: celebrities are jumping headfirst into the NFT-game by (over)paying absurd amounts to join the internet’s most illustrious club.

Justin Bieber is the latest megastar to fuel the hype, after he purchased a Bored Ape for 500 ETH (joining the ranks of DJ Khaled and Paris Hilton, both of whom have ‘aped’ into NFTs). There’s no way to spin it: demand for blue-chip NFTs from high-end buyers is real. It almost feels like the CryptoPunks frenzy of 2021, all over again.

Market hype is often cyclical, and major players are capitalizing. The most recent name to emerge is MoonPay, which has positioned itself as the NFT concierge service to the stars. How? By overpaying for NFTs, hand over fist! Maybe the excess is MoonPay’s commission..?

Still, there are plenty of misconceptions surrounding Moonpay’s services, and in particular, its collaboration with BAYC. Serious questions are being raised. In a nutshell, there could be something fishy going on.

Nonetheless, with or without Moonpay, NFTs have taken off in a serious way. And yet, only 3 million people have ever owned NFTs. The market is still in its infancy! Today, Crypto Twitter is teeming with NFT profile pictures, and with the social media platform enabling a function for NFT holders to verify (and officialize their clout!), a huge inflow of new NFT buyers could be incoming.

But make no mistake, NFTs aren’t without serious risks, not least because investors have an up-only perspective (something that could prove daunting for the wider market). And remember: NFTs are not nearly as liquid as some might think. Once the hype passes, many could turn out to become ghosts of memory’s past, just like CryptoKitties (and next to impossible to sell!).

Are NFTs a top indicator?

Will NFT holders react to wider market movements? It’s hard to say, but there’s evidence to suggest the NFT boom could be nearing a top. In a worst-case-scenario, a collapse could foreshadow another crypto winter!

Chris Burniske compared the previous market tops to euphoric pumps (for example, the LTC pump in 2013, or the ETH peak of 2018). Could NFTs be following a similar path?

BAYC has been, without a doubt, the most significant catalyst for the NFT boom. The floor price has reached an astronomical 100 ETH, while off-shoots like Mutant Ape Yacht Club are trading at an eye-watering 20 ETH minimum! But those gains remain unrealized until you sell.  And that’s what APE DAO, a DAO holding over 81 Bored Apes (and is the 3rd largest BAYC) holder, is voting on (potentially!) doing.

Should the vote pass, all assets would be liquidated (and BAYC floor prices would plummet). And since BYAC was the initial catalyst for the second NFT bull run, this could trigger a wider sell-off elsewhere. We’re not saying it would spell the demise of the NFT market, but it has “potential top” written all over it!

None of this is new. We’ve seen NFTs outperforming the market when Bitcoin and “regular crypto: were moving sideways before.

Could February be the top for the NFT market? Only time will tell, but the key difference now is how, even though NFTs have gained more attention, there is a growing number of traders exercising caution in trading them (given the fact that NFTs are highly illiquid, especially those that have yet to gain a blue-chip status).

NFT could be at a crossroads! Is it make or break time?

As we’ve seen, data points shows JPEGs can outperform regular crypto when the market is directionless (which only leads to more people jumping on the NFT bandwagon). Thinking about it? It could be too late, because the market euphoria that informed so much of the NFT narrative in late 2021 and early 2022 could come to a grinding halt. What would happen then? Chances are it would lead to profits being funneled back into more liquid assets.

This current wave of NFT euphoria could come crashing down in February. So pay close attention, and be careful: either we’re witnessing a highly unique decoupling from other crypto assets, or they are destined to follow the wider market. Floor prices could tumble as the hype and interest die down. What we’re seeing play out has huge ramifications, and whichever way it goes, it will provide the best blueprint we have on how to play the NFT market in the future!

We suggest you always deleverage your exposure to illiquid and risky assets, and exercise caution in times of heightened market euphoria. All it takes is a quick shift in momentum, and every investment you’ve made could go to zero in a flash!