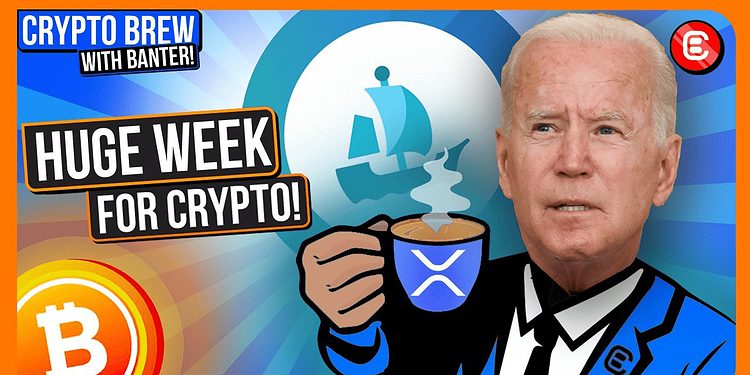 You may have heard the phrase: “Never trust a weekend pump” but what about a weekend dump? As tensions mount across the Russia/Ukraine border, could the proposed Biden/Putin summit see diplomacy prevail? Plus, the crisis in confidence in Canada’s government continues.

You may have heard the phrase: “Never trust a weekend pump” but what about a weekend dump? As tensions mount across the Russia/Ukraine border, could the proposed Biden/Putin summit see diplomacy prevail? Plus, the crisis in confidence in Canada’s government continues.

While some major Altcoins look good on long-timeframe charts, a major bank makes a warning announcement which is incredibly bullish for all (but one!) major L1s.

The Russia/Ukraine crisis continues to ramp up, but finally, it looks as though the USA is ready for a sit down: President Biden has declared intentions to meet with Vladimir Putin, “in principle”, provided that no invasion takes place.

Tensions on the US/Canada border may not compare, but within Canada itself, the Government has continued to crack down on the truckers’ Freedom Convoy continues unchecked, as global donations continue to pour in.

For anyone who lost a valuable NFT in the recent OpenSea heist, the effect is the same either way, but for the platform itself, the distinction is significant. OpenSea CEO

Devin Finzer is claiming the NFT thefts were not the result of an exploit of the platform’s underlying vulnerabilities, but instead a targeted phishing campaign.

The battleground between an open and decentralized web continues to play out, but in the course of a morning, the Joe Rogan Experience was seemingly removed from the Spotify platform…

But in a strange turn of events, it seems Rogan’s podcast was reinstated an hour later! What is going on? Either way, don’t be surprised to see this saga continuing in the weeks ahead.

Is XRP (nearly) out of the woods?

The Ripple saga continues without resolution, but the XRP Army believe the end may be near, and remain confident that it will propel XRP moonward.

US banks have a track record of producing and promoting crypto FUD (Fear, Uncertainty and Doubt), and the latest announcement from Morgan Stanley concerning Ethereum could be a continuation of the trend. On the flipside, perhaps you agree. Maybe Morgan Stanley are simply commenting on the writing on the wall? Let us know your thoughts in the comments section!

Zoom out, and you’ll see the smart money bullishness continues (see our piece on Pantera Capital!).

Meanwhile, Sequoia Capital has recently announced their MATIC Series A leading investment and their newly launching $500-600 million fund, the additional details of which were released yesterday.

As countries and banks continue to see the benefits of a bitcoin ETF, another major bank, the KB Bank, announced the launch of their upcoming bitcoin and crypto ETF, but some believe this may not come to fruition as the FSC (the Korean version of the SEC) will not approve it anytime soon.

Diplomacy is hanging in the balance, and global markets remain in a state of extended anxiety. Bitcoin’s weekend retrace could mark the printing of a higher low, but a visit to the $37k region is by no means off the table. The volume is incredibly low, suggesting it is retail, and not institutional HODLers who are selling. The prospect of conflict on the edges of Europe and mounting global economic uncertainty could provide a buying opportunity, as well as the possibility of more downside in the short term.