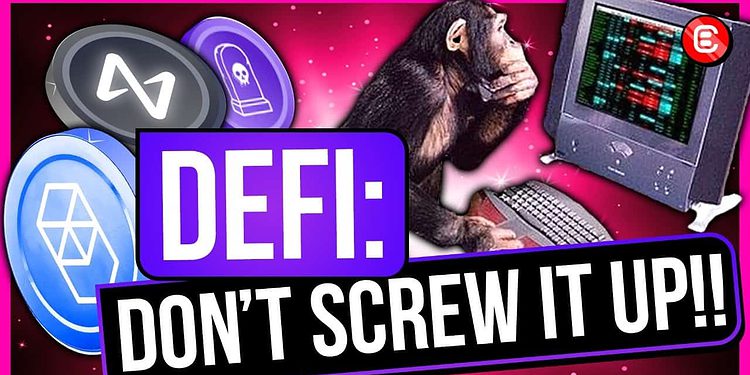 DeFi 101: How to make money in DeFi by not being a baboon

Two weeks ago, I went full degen-ape and put “found” money into high-risk Tomb forks. This is what I learned.

Two weeks ago, I went full degen-ape and put “found” money into high-risk Tomb forks. This is what I learned.

Irrational optimism can be great; it’s why only about 15 percent instead of 99 percent of humans get clinically depressed — Robert M. Sapolsky

A recap and a correction

In my last article, I went against my own crypto investing philosophy and put money in 3omb and Ripae. If you’ve been on the sidelines wondering what all the hype is about, this might be a good place to start before you jump into these high-risk/high-reward pools.

In terms of the correction, I double-counted tokens somewhere along the way. I thought I had gone from 425 Fantom (FTM) to 720 FTM, but it was actually closer to 600 FTM. Not bad, but not quite the “double” I had claimed in the article.

After I published the article, I pulled my profit off Ripae and let about $120 worth of PAE (the share token) ride. I briefly moved my 3omb/WFTM pair to 2omb/FTM, but ended up pulling that the next day. I got lucky on that one I think.

I woke up and found 2omb liquidity had dropped from $110 million to around $80 million and the 2omb peg had fallen to around 0.87. Prior to that moment, I had felt somewhat safe with the (seemingly) large liquidity pool on 2omb.

I reasoned it would give me enough time to bail if something went haywire. To be fair, it did give me some reaction time, but $30 million in liquidity disappeared a lot faster than I thought it could.

I saw the news about Russia and Ukraine about an hour later. By then, the 2omb and 3omb pegs had totally collapsed. Both were somewhere between .35 and .5 (it’s supposed to be 1:1 with FTM). My 600ish FTM was now around 520 after I unwound that position.

I am a 100% supporter of the Fantom Opera chain. I think it has enormous growth potential. It also strained pretty hard under the massive upswing in transactions. Transaction times went from a couple of seconds to a few minutes and the fees basically 10x’d.

The beauty of Fantom is, I was complaining about having to pay $0.45 a transaction. “This is ridiculous!” I thought, completely forgetting all the transactions on Ethereum that took three hours and cost me $50. It reminded me of this little comedy bit by Louis C.K.

Fantom has definitely spoiled me (or, spoilt for my British friends). I can also see they need to scale up pretty fast if adoption rates start going up.

Tomb forks are like a boomer on a hoverboard

As long as people are standing around holding Grandpa up, he’s stable. The second they let go, Grandpa is probably going to need a new hip. And that is why I bailed at the first sign of trouble with 2omb. It’s not stable.

The selling point for me was the idea that T2|3 was a stablecoin that is pegged to Fantom. I like Fantom. I want to stack Fantom. This seemed like an interesting way to do so while reducing the risk of impermanent loss.

3omb actually says this on their homepage:

From a plain-meaning standpoint, if a token drops peg by over 50%, it is neither stable, nor pegged. The founders cleared this up in their AMA though. They said the bonding/treasury mechanism is to help, but the peg requires the community (statement at 00:14:50).

The documents very clearly say the Share brings over-peg down, Bonds bring under-peg up, and the DAO (Treasury) is a “second-line” of defense against downward sell pressure (extreme under-peg). They apparently deployed the Treasury to the tune of a $500k buyback that did… well, nothing.

The markets let go of Grandpa 2omb|3omb and he went splat. Tomb held peg the whole time. They also have a billionaire backer, $600 million in total value locked (TVL), and a massive Treasury.

And Tomb Finance is more honest on their site. No claims about “pegs” or “stablecoins”, just this:

Which is mostly fair. The simple fact is, without Treasury intervention, the Bonding mechanism doesn’t work. Full stop. If the Treasury doesn’t have enough money to maintain the peg, it can collapse under sell pressure from an external shock.

Bear in mind, the external shock that blew up the T2|3 peg was a relatively poor country invading a really poor country that used to be basically the same country (the USSR). In terms of overall geopolitical market risk, it seems the markets kinda burped a little and kept right ongoing.

The broader crypto market seems to be slowly recovering as well, but 2omb|3omb still hasn’t hit their peg as of this writing. 2omb is slowly climbing back. 3omb is having a harder time at it. For perspective, the Iron Bank “stablecoin” was off by 50% when that protocol collapsed.

Ripae has never been at peg, but it’s always been way over. Their share price took a huge dump though AND they found a bug in the Treasury code that was letting a hacker drain funds unchecked.

Rather than drone on and on, I’ll break out my findings/thoughts into a list:

But I want my APR!

Terra/Anchor, AAVE, Planet Finance, Curve, etc. Pair, single stake, and/or lend stablecoins (actual stablecoins) or single sides (only one side of the pool), earn 4–35%(+), and be happy. Just FYI, these are AMAZING returns for holding xUSDx or tokens you like anyway.

Consensus stake. NEAR, Fantom, Polygon, Terra (and many others) all offer staking pools whose sole function is to validate transactions. Easy 8–15% APRs for parking tokens you like anyway with technically skilled network engineers running servers. Staking-as-a-service is a thing and it’s growing daily. Easy money, with a tiny slash risk (if the server goes down or prints a bad block).

And for the love of God, pretty please, with sugar on top, do not lever (borrow) to invest in other stuff. I can say with absolute certainty, a truck-ton of people got liquidated last week. A token dropping in price sucks, but a liquidation is forever. On the flip side, buying liquidations is quite literally free money if you play your cards right. Baboons are terrible at cards.

Of course, these are just my opinions. I’m not a financial advisor, this isn’t financial advice, and always do your own research (DYOR). Following any of these ideas might cause you to lose all of your money. I am 100% serious about that. I like tinkering with this stuff, but I’m now on record acting like a total baboon. Invest accordingly.

Until next time, be safe, be smart and be sure to tie the camel.

“An objective, evidence-based exploration of crypto and finance.”