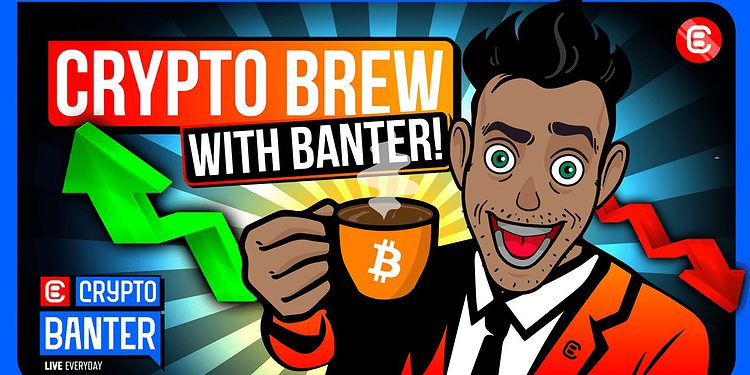 DeFi mechanics put into question, Layer-1’s ready for lift-off, could the next hype wave the crypto markets so badly need have arrived?

Bitcoin is eyeing the $42k mark, which could happen sooner than you think. While one particular Layer-1 (L–1) had a monster breakout in Q4, another major Layer-2 (L-2) is making heads turn with explosive growth and its latest mega update.

Defi is being put through the ultimate stress test, which could determine the future of stablecoins! While one particular Layer-1 (L–1) had a monster breakout in Q4, another major Layer-2 (L-2) is making heads turn with explosive growth and its latest mega update. Another day in the world of NFTs, another record broken…

In the most action packed Crypto Brew yet, we unravel it all..

Just days after Russian President Vladimir Putin backed crypto mining despite the Russian Central Bank’s calls for a ban, news came out of the White House that regulation is coming for Bitcoin and other digital assets as a “matter of national security”.

As the biggest option expiry of the month nears, all eyes are on the max pain level located at $42k. Coincidently, this is also the next key resistance for Bitcoin, according to most technical analysts.

Could this be the catalyst that pushes the Bitcoin price above $40k? Whether this is the reason miners, whales and long term holders are accumulating Bitcoin remains to be seen..

Has Apple already entered the metaverse?

Apple, the world’s most valuable company, released its earnings report yesterday. To the relief of all market participants, it exceeded expectations. This was one of the primary reasons for the bounce in the stock market but this was not the most important news coming from Apple.

AVAX to the max

Even though the price of most cryptocurrencies is down in the last few months, major Layer-1’s have been putting in work on their ecosystems and the results are astonishing.

As the Avalanche bridge went live, the average daily active users on AVAX increased seven times from Q3 to Q4! That’s not just it… AVAX had a breakout Q4 where it posted ATH’s in transactions, total value locked (TVL) and market cap too.

It’s not just the Layer-1’sposting crazy numbers. Matic, a Layer-2 (L-2) scaling solution, posted another insane number showing how exponentially its network is growing. The number of dApps on MATIC went parabolic from October 2021 to December 2021.

Cause for worry for LUNAtics?

As the Terra ecosystem continues to soar, LUNA had a monster breakout year in 2021.

Its stable coins, primarily UST, continue to get more and more adoption but recently, some developments in Anchor, the savings protocol for the Terra ecosystem, has some investors worried.

Anchor offers 20% APR on stablecoin. As borrowing on Anchor dropped and lending continued to rise, the imbalance created a serious shortage of yield reserves. Either, borrowers need to come back in large numbers to rectify the imbalance or some external UST needs to be injected so as to ensure the system is running perfectly.

Knowing Do Kwon, co-founder of Terra, this matter will be resolved soon – as most LUNAtics believe.

2021 was definitely the year of NFTs. The entire ecosystem blew up on a scale no one had expected in their wildest dreams. This looks to be accelerating into 2022.

The market is struggling to find direction, and sentiment is reflecting exactly that. The Wonderland saga has brought to light more than one issue, not only the lack of due diligence in a market that is not yet fully regulated, but also the mechanics of DeFi have been brought to light for public and professional scrutiny. It’s a stress test DeFi needs to undergo if it is to hit mass adoption. Will it pass?

Once again, there are plenty of ways to capitalise on opportunities within the crypto space, as seen in NFTs sales and the parabolic passive income on Pegaxy. Whether this growth is sustainable or not is unclear, but one thing we are sure of is that while it is here, we will undoubtedly be a part of it.

On the final note, Apple’s ($APPL) earnings were above target, giving the finance markets a slight boost in sentiment, but what we’re more interested in was its expressed interest in the metaverse. A story that this Banter journalist will be closely following.