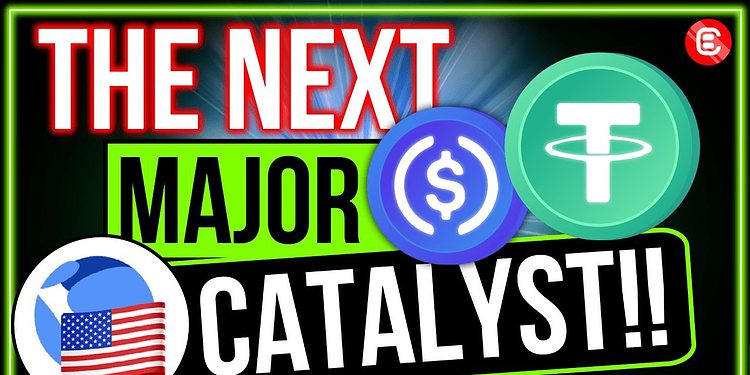 Dry powder is piling up: is smart money preparing to deploy?

We have a new all-time high in the crypto markets, and historically, it’s been a pretty reliable indicator of an incoming reversal.

We have a new all-time high in the crypto markets, and historically, it’s been a pretty reliable indicator of an incoming reversal.

The amount of stablecoins sitting on exchanges is at the highest levels ever.

Just look at this chart!

Translation? Deployment is coming. And if you’re not in the market, you’ll be missing out on a huge opportunity.

If you read our ‘Chart of The Day’ today, you’ll know the USDT dominance just rejected a key level, indicating that cash is flowing back into the trading market. Unless something unforeseen happens on a macro level, we’re likely to come down and test a key support line.

Lose the support a massive injection of cash could enter the wider market.

And we really do mean massive

Relative to the Total Crypto Market Capitalization, there isn’t just significantly more stables sitting on exchanges than around the time of the July 2021 bottom, but almost 4 times the expression of ‘bid’ versus ‘ask’ interest on spot order books.

As this @lightcrypto suggests, hopes of buying back lower could be dashed if money begins to flow in (and end up with some seriously smelly fingers).

Stablecoins are eating the world

The huge amount of stablecoins on exchanges suggests that buyers are waiting to deploy. So clearly, you don’t want to be caught with your pants down when they do.

But it also speaks to something else: the almost exponential adoption of stablecoins and their future role as a medium of exchange.

The explosion of stablecoins raises meaningful questions about the dollar itself.

While USDC is on course to overtake USDT in terms of marketcap, its potential role as a potential medium of exchange beyond intra-crypto trading will come up against competition from the US’s inevitable (gulp) digital dollar, a Central Bank Digital Currency that would operate on blockchain technology.

Mountains of dry powder are piling up on the sidelines, and they have to go somewhere.

Will Clemente put it well:

A combination of on-chain analytics and the sheer amount of stablecoins on the sidelines presents a compelling case for bullish continuation in the months ahead, especially with the worst of the Fud (we hope!) behind us.

The most pressing question, then, isn’t when will the money flow in (though the USDT dominance chart is a good place to start), but where? The answer is likely to be a combination of Bitcoin (the Bitcoin dominance chart is screaming for a temporary upwards move), and those alts showing the most relative strength. Remember, learn to play the cycles: money tends to flow from Bitcoin to large caps, to mid caps, and finally, microcaps!

Stablecoins are a pretty reliable indicator for tracking market cycles. The fact we’re seeing such high levels on exchanges is to be ignored at your peril! Combined with the on-chain data, and technicals (the Stochastic Relative Strength Index suggests Bitcoin is oversold on the weekly chart) means we wouldn’t be surprised to see serious capital deployed into the market in the coming weeks!