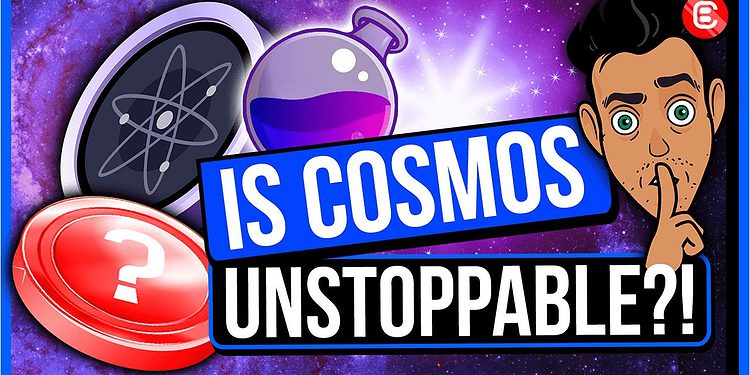 Ethereum. Solana. Cardano. Could Cosmos be the one to unite them all?

As each blockchain continues to grow, so does the attitude of its ardent supporters. All these blockchains act like separate, individual universes with little to no interoperability. But what if there was a blockchain to unite all blockchains? Enter Cosmos…

As each blockchain continues to grow, so does the attitude of its ardent supporters. All these blockchains act like separate, individual universes with little to no interoperability. But what if there was a blockchain to unite all blockchains? Enter Cosmos…

2021 was an interstellar year for Cosmos. It successfully launched its Inter Blockchain Communication (IBC) protocol and completed its whitepaper. 2022 looks to be even bigger!

It unveiled its roadmap for 2022, starting with the launch of its highly anticipated next gen Ethereum Virtual Machine (EVM) Hub.

Cosmos, aka The Internet of Blockchains, has a simple plan – to enable any blockchain to freely exchange assets and data with any other sovereign, decentralized blockchain.

With blockchains popping up like mushrooms in Farmer Brown’s field around the world, Cosmos is focusing on that all important interoperability and decentralization. Someone needs to, right?

Which is your favorite blockchain, your very own Preciousss? Ethereum? Solana? Cardano? The Binance Smart Chain? They all have their advantages and disadvantages, and their own range of developers and builders.

How does that work?

Cosmos publishes a set of open source tools – including the Cosmos software development kit (SDK), Tendermint and IBC – which are designed to allow people to develop scalable, custom and secure blockchain apps.

ATOM – the Cosmos Hub’s primary token – secures the Hub’s interchain services. You can stake ATOM to receive rewards in newly minted ATOM, and a share of the chain’s transaction fees. Staking ATOM also allows you to vote on Cosmos Hub governance decisions.

Cosmos fans have been patiently waiting for it to connect with Ethereum and it’s finally happened! Ethereum is connected to Cosmos courtesy of the Osmosis decentralized exchange and the Gravity Bridge.

Gravity enables ERC20 (one of the main Ethereum tokens) assets to move from Ethereum into Cosmos, and back to Ethereum. ATOM, and any other asset in the Cosmos ecosystem, will be able to trade on Uniswap and other Ethereum Automated Market Makers (AMMs), and interact with Ethereum DeFi like any ERC20 token.

Osmosis’ popularity is on the rise. It currently has $1.4 billion in total value locked (TVL), according to DefiLlama, up from just under $100 million at the beginning of August 2021.

But haven’t we seen this episode before? Didn’t the Avalanche ecosystem have more than $367 million pouring in from Ethereum when the Avax bridge came online? Bottom line is, Cosmos now has direct access to Ethereum’s $375 billion market cap, a lot of which is free to move to Cosmos, in much the same way it moved to Avalanche.

EVM compatible chains (what Cosmos is becoming as a result of that lovely bridge) are gateways for Ethereum users to move their assets to cheaper and quicker ecosystems (because gas fees, right?). To distinguish its version, Cosmos is calling it Evmos.

Originally called Ethermint, and short for “EVM-on-Cosmos”, Evmos’ job is to make it easy for EVM smart contracts to deploy and communicate within the Cosmos ecosystem.

The Cosmos devs’ roadmap calls Evmos an application-agnostic chain that’s interoperable with the Ethereum mainnet, EVM-compatible environments, and other BFT chains via the Inter Blockchain Communication (IBC) protocol. Evmos will serve as the EVM hub for any other EVM Cosmos chains.

Evmos will be huge for developers, because they will be able to leverage the massive amounts of development that has already happened on Ethereum. Not just that, Evmos will finally enable assets like Ethereum, FRAX and OHM to freely flow into Cosmos and interact with other Cosmos-native assets like ATOM, LUNA and OSMO.

Here’s the big question… How do you get your hands on some Evmos tokens? It’s speculated to be the biggest airdrop in crypto history. The Rektdrop (yup, that’s exactly what it is called) is promising to be novel in many ways.

How does a new gas drop mechanism sound? And airdropping to bridge users? Plus! A record number of chains and applications will be eligible for the airdrop. Look out for this one!

The IBC protocol was designed to solve the lack of communication and data sharing between different blockchain networks. Sunny Aggarwal from Osmosis uses shipping containers as a metaphor. Before 1970, shipping containers were random sizes. Standardising the size of a shipping container created an economic boom as ports were able to move goods at speed and scale. IBC is the Cosmos shipping container. If you think 2021 was the year of IBCs for Cosmos, 2022 might surprise you.

Tendermint CEO Peng Zhong recently told CryptoSlate, “I think we will easily see 200 chains connected via IBC by this time next year and, in the long term, even a million.”

Whether Cosmos is able to successfully connect with 200 chains in 2022 remains to be seen, but the future of the IBC protocol looks bright. (Check out mapofzones.com, the Cosmos Ecosystem Explorer, for visuals and statistics regarding IBC transfers and the like.)

The superbrains at Delphi Digital have also noticed the positive fundamentals in the Cosmos ecosystem. The research house recently released a report showing that Cosmos is growing even faster than we imagined.

Key metrics like user interaction and daily transactions have significantly increased recently, and the Evmos launch is expected to boost these numbers.

What’s next for Cosmos?

Cosmos has a slew of projects lined up for release in 2022, from DeFi to liquidity staking. Even some super-exciting ones for all you NFT and gaming fans too.

Emeris aims to provide a professional cross-chain dashboard for the Cosmos ecosystem.The public launch of Emeris is coming up in the second quarter of 2022 and promises to bring advanced capabilities for portfolio visualisation, digital asset management, and service discovery. There will also be staking with auto-compounding of rewards to maximise rewards generation, cross-chain DEX aggregation, an airdrop tracker, and a browser extension that works seamlessly with the Emeris web dashboard.

Another anticipated release is liquid staking on Osmosis, aptly called Superfluid staking. Osmosis co-founder Sunny Aggarwal spilled the beans on this upcoming release in his new video. OSMO holders will be able to use their tokens for staking and liquidity at the same time. They will also ensure that the protocol’s governance serves the interests of liquidity providers and much more…

Dive into the world of NFTs on Cosmos

Cosmos has a long line of NFT projects set to launch in 2022, from music NFT marketplaces to full fledged games minting NFTs. These include:

Along with these exciting projects, Evmos will also soon support NFT deployment and host marketplaces for people to easily trade and deploy NFTs.

Cosmos is an ecosystem that continues to grow at an astonishing pace and the best part about this project is that it isn’t “Just another copy of Ethereum”. It is bringing something new to this space – innovation. It also has some of the most talented and forward thinking developers in crypto, building solutions that look far beyond today’s capabilities.

DYOR into the upcoming blockchains which haven’t hit DEXs yet, and get in before the crowd does.

An ecosystem which is growing so fast will give investors multiple opportunities for solid gains if you can navigate and find the right projects for the future.