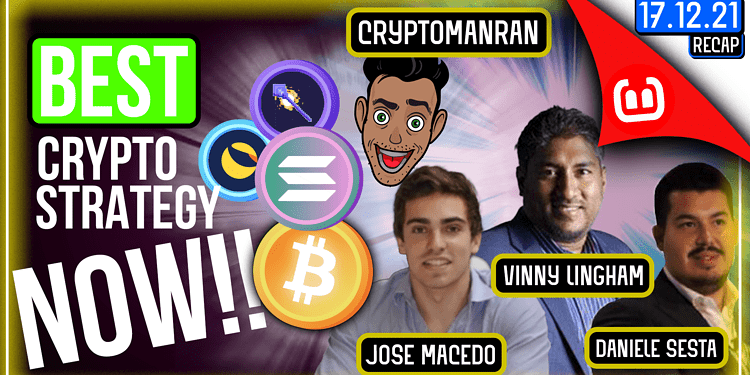 Which investment strategies will yield the best results in 2022? Vinny Lingham, José Maria Macedo, Daniele Sesta and Ran NeuNer shared theirs with the Banter family on Friday. Read all about it here.

The cryptocurrency market is brimming with possibilities, but deciding on the best investing strategies can be difficult. In the final Banter Friday for 2021, Ran NeuNer, the founder of Onchain Capital and Crypto Banter; José Maria Macedo, the head of consultation at Delphi Digital; Daniele Sesta, the backer of Popsicle Finance, Abracadabra and WonderLand; and Vinny Lingham, the co-founder and CEO of Civic, delved into their top investment strategies going into the new year.

Vinny says the global macroeconomic crisis is still unfolding as inflation is much higher than reported. This is why the Federal Reserve opted to maintain interest rates and double the size of the taper to $30 billion per month.

Other countries have been producing money in the same way that the United States has, because they can not afford to see the US dollar depreciate against their currency. If it does, it will affect export commodity prices, putting them out of business.

Unlike 180 countries creating money, the majority of cryptocurrency market share is concentrated in the top 15 coins, all of which have high utility and fundamentally sound tokenomics (fixed supply, deflationary).

Ran says the cryptocurrency field places much too much attention on the Fed’s minute interest rate decisions. These only have a short-term impact on markets, and should not be used to establish the longer-term investment aim for disruptive technologies.

Their conclusion is that the Federal Reserves of various countries must continue to increase the money supply and inflate, to compensate for debts coming in. The only other option is deflation, which is impossible because it will be terrible for everyone. There is no better place to be right now than crypto, José Maria says.

There is a significant contrast between the current crypto market and the last bubble (2017). The rise of scalable Layer-1s and Layer-2s is proof that there are legitimate builders and developers aiming to capitalise on the disruptive blockchain technology in the area, José Maria notes.

Avalanche has a lot of innovations due to its amazing technology and scalability. Its composability with the C-chain, which is Avalanche’s default smart contract blockchain, allows the construction of any Ethereum-compatible smart contract.

José Maria’s Delphi Digital is developing on Avalanche, but is more interested in incubating projects on the Luna ecosystem. The Delphi team believes Luna will be the most successful ecosystem once stablecoin regulations are implemented. There’s also interest in StarkWare Layer-2 solutions, because they benefit from base layer blockchain’s scalability and security.

Ran asks how to invest in the Ethereum Layer-2 story, particularly in ZK rollups, where projects like zkSync and StarkWare do not yet have a token.

José says that getting direct exposure now is impossible because StarkWare is private, and no one knows when zkSync will release a token. He suggests getting active in the ecosystem and the projects that are being developed on it.

He also recommends talking to developers about future projects and giving liquidity. Developers build products that can only exist on these platforms owing to their scalability, which cannot be built on Layer-1.

Daniele Siesta says his firm sold around $150 million worth of AVAX at $120 per token, and has held onto AVAX tokens worth more than $250 million. He views Layer-1 valuation as speculative because many people believe that other Layer-1s should be worth a certain amount in contrast to competitors’ valuations.

Daniele doesn’t feel that an ecosystem’s total value locked (TVL) is a fair measure of the network’s value. His reasoning is that anyone can heighten their investment manyfold without engaging in ecosystem-related activities such as gaming.

Despite the recent partial transaction failures, Vinny says he would put 80% of his money into Solana and spread the rest around. He believes the Solana network will overtake Ethereum, as it is the fastest and most scalable blockchain available.

Layer-2, according to Vinny, violates the purpose of blockchain, which is to move assets around on a single layer. In the long run, it poses a security danger to Layer-1, and also pulls economic value from it, he believes.

José claims that multiple risk profiles exist. For example, Ethereum is less risky because it is more established. He is 80% plus in Luna. He says he’s intrigued by the Layer-2 argument as Layer-2 breaks composability, which is why the industry went cross-chain in 2019.

He believes that it makes little difference to consumers whether they switch to another chain, as long as they can make transactions faster and cheaper on these Layer-1s than they can on Ethereum’s Layer-2s. An example is Arbitrum, which compromises composability.

The need for computing is unlimited. The cheaper the service becomes, the higher the demand. This means the thought of having everything on one chain is unappealing. Rather, it’s better to have many blockchains with distinct topologies such as, Cosmos, a marginal blockchain, with blockchains like Luna specialising in DeFi, and others in gaming and NFTs.

He also thinks the Inter-Blockchain Communication (IBC) protocol on Cosmos, which allows blockchains to talk to each other, will allow multiple networks to be composable.

According to Daniele, the future of blockchain networks will be a multi-chain world, and developers should focus on developing interoperability across the chains.

Top narratives for the next 6 months

Metaverse and Web 3.0 will be the major winners in 2022, Vinny says. The Web 3.0 narrative is strong, as it’s generating attention and is borderless. The primary takeaways are storage, computing power, domain name servers (DNS), and identity. He expects that decentralized solutions will arise and compete with Amazon and Google, akin to how Web 2.0 unbundled financial products.

GameFi, according to José Maria, will be big because expert game developers from the last two decades are switching to crypto and getting it right from the start, which will drive further crypto adoption. He also believes that at some point there will be a large graveyard, because there is a lot of garbage masquerading as play-to-earn with absurd valuations.

He believes decentralized autonomous organisations (DAOs) will be huge as well. Regulation will be the driving force behind them and they will allow communities to be organised and decentralized in a more efficient way.

Decentralized option trading, states Daniele, is long overdue. Because the majority of retail investors’ actions are on options, a platform with a unique blockchain like Do Kwon’s Terra Luna is required. Another is DAOs, which José Maria described, but preferably ones created by developers outside of the United States, due to its restrictions.

Daniele’s final suggested narrative for the next six months is cross-chain DeFi, which can integrate everyone and allow them to benefit from many ecosystems.

In the first quarter of 2021, Ran predicts a frenzy for Ethereum Layer-2 scaling solutions, as well as decentralized social networks sometime next year, and a decentralized metaverse (Web 3.0) with decentralized storage, money, and computing power.

The cryptocurrency market is driven by narratives and here we’ve identified the finest. The market is down at the end of the year, which presents buying opportunities. Now is the time to focus your strategic efforts on the narratives that are expected to win for the next leg of the bull market.