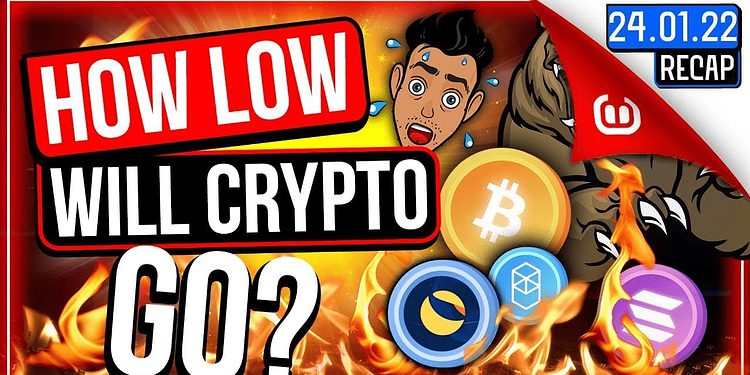 It’s okay to get emotional about the market situation, but don’t get so carried away that you forget to strategize for the next bull run.

On the show today, Ran decided it was okay for us to cry into our beers. But he came on with Gareth Soloway, TechDev, and Miles Deutscher, who brought some words of comfort on what to expect from the market and how we can take advantage of this bearish trend.

Have we hit rock-bottom yet?

To get a good indication of how the market is going to react, Ran brought expert trader and traditional market analyst Gareth onto the show. Gareth thinks there is a chance that we will see a bounce in the Nasdaq today. And as soon as it does, crypto will start to bounce also. On a technical basis, we are hitting the exact replica of the 2021 April to June collapse before we got the big move up. Does this mean this is the bottom and we’ll go back to the all-time high? Nope probably not, because there’s still a lot of leverage in the system, but Gareth thinks we might bounce back up to the US$40K range – at least short term.

It feels like Bitcoin is oversold, and indeed the RSI indicates that on all time frames. Looking at the Nasdaq, it’s down 15% and Bitcoin is down 50%. So, it’s likely that Bitcoin will bounce in correlation with the Nasdaq. In 2017, crypto topped out a few months prior to the stock market, as it has also done in 2021. Which means this is an historic leading indicator in many ways. Which makes sense because crypto is a relatively new asset compared to stocks. So, of course, money runs away from crypto first. Gareth feels like in a few years, this won’t be the case though and it’ll be a more stable asset class to invest in.

According to a tweet by John Street Capital, Bitcoin is a leading indicator for macro markets and Gareth agrees with this. After the Fed’s FOMC meeting on Tuesday and Wednesday of this week, if they talk about tapering off the rate hikes this year or take more of a dovish tone, we will see Bitcoin get a major bounce. The same way Bitcoin led when it topped out in October-November and the stock market didn’t top out until December, the same thing applies for when it makes the lows.

Right now, the Fed is in a horrible corner, that they backed themselves into. When inflation was 2%, they could print as much money as they wanted without repercussions but they simply can’t do that now. Gareth thinks they’re going to taper, but they’ll readily back off if the economy starts to struggle, which it will, eventually. The long-term trajectory is golden for Bitcoin because the Fed can’t stop fully printing money as the markets are too intertwined with the economy. And if the markets fall, unemployment shoots up and the Fed has to attack it with leniency in their monetary policy.

Gareth thinks the FED won’t be able to increase the interest rates more than twice this year because if they do more than that, the economy will suffer. For Bitcoin, this probably means a longer-term bullish run in the second half of the year.

We are at a point where there is extreme fear in the markets. And we all know that when there is extreme fear, you should be bagging more coins. There are a lot of on-chain metrics that are positive. One is that we have US$2 billion worth of Bitcoin options that are going to expire at the end of January. And right now, the point of max pain for BTC is around US$44K. This means two things; run back in turbo or massive volatility that are yet to be seen on the options. There’s a lot going on in the options market, showing us that there might very well be a pump in Bitcoin.

Even though the on-chain metrics are bullish, this is a much bigger thing. This is about the relationship between the macro-economic environment and crypto. Although the Nasdaq has gone down about 15%, it feels like crypto overreacted and shot the mark down.

Bringing on TechDev to speak about the on-chain metrics, he said he feels like the market has not impulsed since about February 2021 and we have been in a correction since then. There are pieces of evidence to support this, like the volume. The volume has been non-existence since February and we have continued to range between US$69K and US$30K for over a year now. TechDev said he views the market as having been correcting for almost twelve months now.

Despite the doom and gloom on the market right now, TechDev said he’s not buying right now. His approach is to look for when the bottom has likely been reached for BTC, and to look for support structures to be built. He feels like that might be a good time to add to his Bitcoin positions. He thinks there are going to be some extremely attractive opportunities out there as long as you enter sensibly and with a strategy. Right now, what you should be doing is to wait for this correction to finally complete and to show that a new impulse wave has started.

What do we do now?

With the situation of things, what do we do now? If you take out the emotions, you’ll realize that we have been given another chance. When the market was running, we couldn’t buy because the prices were expensive. So, for those of you that missed the train, the train has come back. The question is, are you going to get on or watch till it leaves again? It’s nice to have the market up but it’s how you position yourself in a bear cycle that determines if you’ll cash out in a bullish cycle. Afterall, millionaires aren’t made in the bull market, they’re made by the plays made during the bearish trends.

Now is the time to reposition your portfolio and identify the next narratives. If you are able to identify the next narrative, you will definitely be able to cash out when the markets start running. Eject emotions from your decision making right now and strategize. It’s okay to have your pity-party. But when you pack away the bottles, get down to serious business and get your portfolio in order.

Ran’s top advice for you right now is first to stay in the market. This would be the absolute worst time to sell because you will miss the bounce. There was a mini bounce of 33% yesterday in Fantom. If you are leveraged in your positions, then you should stay put. It’s okay to switch coins, but don’t sell outright.

Also, you should start dollar cost averaging into quality. This is because, according to Ran, this price is likely not going to go down much more. Another thing is to leave some cash on the side, step away from your computer, put your phone down and most importantly remember that opportunities like this are a rare gift in crypto. Who would have thought that we would be getting another opportunity to buy Cardano at US$1, Solana at US$85 and Polkadot at US$16?

How far back are we on the clock? Currently, Avalanch is trading at US$57, and the last time we had this price was September 2021. So, we’ve basically gone back to September last year in terms of prices. Open your eyes and see that this is a great opportunity. Now is the time to stop the pity party, kick out the emotions, put on your big boy or big girl pants, and start thinking logically. The market is going to recover, crypto is taking over the wolrd and you’re going to need Layer-1 (L1) power and DEXs. You’ve been given the rare opportunity to buy them at prices we haven’t seen since before September. And if you’ve just come into the crypto space, you couldn’t have come at a better time.

Is the market all doom and gloom?

Moving on to some more positive news, SundaeSwap seems to have had a partnership with Cardstarter and they were going to give a percentage of the SundaeSwap token to the CardStarter community. But they seem to have made a decision out of the blue to drop the number of tokens agreed upon. Ran has invited both parties to the show so they can sort things out. Fingers crossed that they’ll take him up on his offer.

In the same vein, the long awaited snapshot of the top 20 Fantom ecosystems for Andre Cronje’s new project has dropped. Bringing on Miles Deutscher, he spoke about how the net result is positive. Even though some liquidity will end up leaving, the rest will be captured in the ecosystem. Fantom is now up in the top 3 cryptos for Total Value Locked (TVL) and this shows the power of what Andre did with his airdrop project. Whatever happens, it’s going to be a win for the ecosystem.

Miles thinks the competition for TVL was unfair to the projects that have been around for a while, like Liquid Driver or Tomb Finance. In the bid to get in on the airdrop, some projects like OxDAO cropped up, offering insane rates, and they sucked up a lot of TVL, effectively pushing projects like Liquid Driver down on the list and out of the game. We’re just going to have to wait and see if anything will be done about these projects.

It’s okay to get emotional about the market situation, but don’t get so carried away that you forget to strategize for the next bull run. So, to help you with this, for the rest of the week, we’re going to be looking at positioning and repositioning. We’ll be talking about how to make the best of the market, what play to look into, and what coins to bag. So, strap yourself to your seat and follow us on the show.

Get ready to buy the dip in preparation for the market’s recovery.