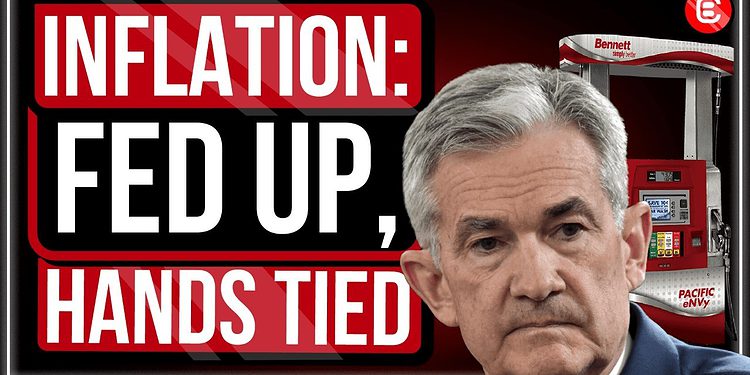 The US Bureau of Labor and Statistics today released the latest Consumer Price Index (CPI) figures. For the third month running, it’s the highest in 40 years: a whopping 7.9%.

The US Bureau of Labor and Statistics today released the latest Consumer Price Index (CPI) figures. For the third month running, it’s the highest in 40 years: a whopping 7.9%.

It’s high. Very high. And just about as high as expected.

The CPI data began spooking the markets in November, not because investors were concerned about the costs of living, but because of uncertainty around what the Federal Reserve would do about it. After all, it has two clear mandates: manage inflation and maintain healthy levels of employment.

At the time, inflation levels of 6.8% meant the Fed had no choice but to aggressively raise interest rates.

Since then, the situation has changed. Today’s data is 7.9%, and yet, as far as the market is concerned, it’s meaningless. Why would that be?

First of all, a CPI of 7.9% means nothing to the average American, who is experiencing very different inflation numbers.

Secondly, it’s meaningless because of how the Fed will (or won’t) react.

After the last FOMC meeting in February, we were faced with the prospect of a 50 basis points(bps) interest rate hike in March, and possibly 100 bps by July.

But now there’s an almost 100% chance the Fed will only raise rates by 25 basis points this month. And the figure is already priced in. Why?

The Fed’s hands are tied

The Fed really can’t do much more than that. If it raises rates aggressively, during a war, when the commodities are surging, it would trigger a worst-case-scenario stagflation crisis: a combination of slow growth and sky-high inflation.

But today is a historic day

To put money into the market, the Fed buys bonds and mortgage-backed securities, puts them on the balance sheet, and injects cash into the economy.

Today likely marks the last day that the Fed bought bonds, and that’s after its two-year-long buyback of nearly $6 trillion in treasuries. Today’s $4bn treasury buyback looks set to be the last.

On Friday, it will stop buying mortgage-backed securities. It’s the end of an era!

But the Fed has no other recourse. And this chart could be about to see a correction!

From every angle, the Fed is screwed.

Because in spite of everything else it’s been dealing with, it now has to contend with another pretty insane chart.

This is the Goldman Sachs Commodities Index (SPGSCI), which represents a basket of commodity assets, including wheat, oil, and gas, which have all gone parabolic since the outbreak of the Russia/Ukraine war.

The Fed is staring down the barrel of a 50% increase in the price of commodities in the first two months of the year. Many of which are the most direct drivers of inflation.

First, the Fed said it was transitory.

Then it was the greedy corporates and their profit margins.

Now it has a new scapegoat. And a good one at that: Vladimir Putin.

The Fed simply can not, and will not, increase rates significantly when the price of gasoline is up 35%, and a potential supply shortage looms.

It won’t raise rates aggressively when the cost of heating is up 30%.

For the average American, rising rates wouldn’t just add insult to injury, it would be the hammer blow. Costs of living are already going through the roof. A 50bps rate hike would see car repayments go up, mortgage payments go up, and lots of family finances go down to the point of collapse.

It’s simply off the table.

From now on, CPI data could, and likely will, come in much higher, and the Fed’s response will likely remain unchanged.

Inflation data matters to the American citizen struggling to pay the bills.

But for the market, it’s always the anticipated course of action from the policymakers that matters.

That’s partly why the market didn’t respond to the latest CPI data: it understands that CPI cannot be tackled head-on.

What does this mean for Bitcoin and crypto markets? In the absence of hawkish monetary policy, ‘digital gold’ might start looking shiny again.