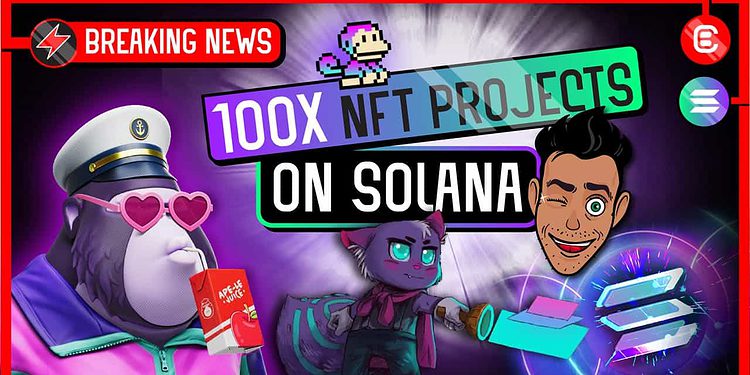 Five Solana NFT projects that are so hot right now

Solana gaming and NFT projects are soaring. Here are 5 of the hottest NFT gems out now.

Could one of these 5 hot SOL projects be a future BAYC or CryptoPunk gem?

What should I look for in NFTs right now?

As non-fungible token (NFT) sales skyrocketed to a record-breaking $10.7 billion in Q3 2021, many people have looked into jumping aboard about every new NFT project. This has caused a high volume of transactions to occur at similar times and pushed gas prices on Ethereum through the roof.

Today, many investors are looking into alternative blockchains to avoid the dreaded gas wars that come with NFT minting. Solana, in particular, has seen its NFT economy flourish, as users have discovered how cheap it is to mint and buy NFTs on the network.

If you’re a serious NFT investor, you should be looking at Solana’s gaming ecosystem. Those who have already, have been crushing it.

Here are some of the biggest projects in November 2021 with first-mover advantage on Solana (excluding of course the much-anticipated Sidus NFT Heroes and Monkeyball NFT games which are about to drop) and exciting new bloods that are pushing the boundaries of NFTs as we know them.

If you’ve been in the NFT space for a while, chances are that you’ve heard about Degenerate Ape Academy, the best-selling collection on Solana. When Degen Ape launched on 15 August 2020, it sold out in eight (!) minutes. The team even had to issue refunds shortly after, due to the overwhelming surplus of SOL, a testament to the Solana NFT community’s exuberance.

Degen Ape Academy has set the standard for projects with high-quality 3D graphics, as opposed to the usual 8-bit pixels and amateur drawings that we see in most NFT projects.

DAA could be the eventual SOL equivalent of the success of Ethereum-based Bored Ape Yacht Club.

Another platform that has outdone itself in visual quality and utility is CatPunk, which offers three types of NFTs for each minted OG Pass NFT, which functions as a ticket to acquire two different types of 2D CatPunks, and one 3D CatPunk. The 3D ones, in particular, have been praised by many players in the space, including Big Brain Holdings’ SOL Big Brain.

While Degen Ape might have set the standard for modern 3D characters, SMB has proven that pixel art NFTs still have a place on Solana with its current valuation of $169 million. SMB features 5,000 algorithmically-generated 8-bit monkeys that offer its holders governance rights and influence over its treasury.

Aurory features a play-to-earn (P2E) gaming platform that consists of 10,000 Aurorians, which are profile picture (PFP) NFTs that serve as the backbone of its community, giving its holders several perks. With around 50,000 users attempting to mint during its public sale, Aurory sold out in three (!!) seconds, making it one of the most in-demand NFT projects on Solana. The project recently launched the IDO of its in-game currency AURY lon 22 October 2020.

Deviating from the usual avatar NFTs, Meta Homes is the first NFT project to enable users to mint 3D home designs that they can own on the upcoming metaverse. Once the AR feature is enabled, holders can walk through their Meta Homes no matter where they are via a mobile-powered AR camera.

The influx of quality NFT projects on Solana is a very positive indicator that the platform is now attracting some of the best next-generation talent. With stronger competition, more options, and a massive saving on gas fees for early investors, there are incredible NFTs to get familiar with.

Keep in mind, though, that NFTs are a very risky investment that can be hard to offload in bear markets. Solana is not as well established or proven as Ethereum and hence there is significant risk involved. Narratives, hype, and trends come and go, but projects with strong utility, earning potential and a built-in audience should continue to prosper, whatever the market decides.