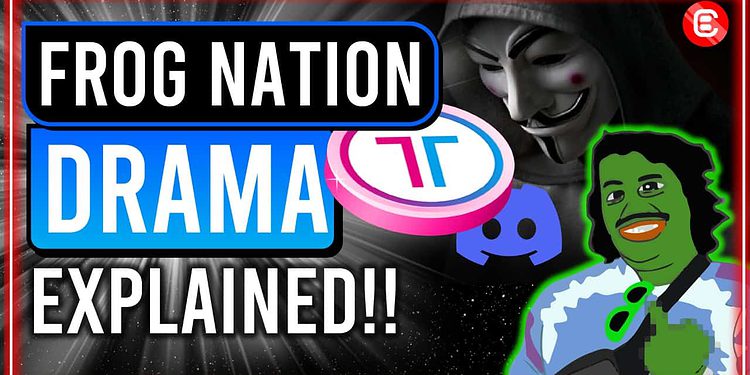 Frog-gate continues, and Daniele Sesta must be having the worst $TIME of his life

If you thought yesterday’s debacle was rough for Daniele Sesta and the Frog Nation army, today has been a nightmare. And it’s not even lunchtime in Europe as we’re writing this.

If you thought yesterday’s debacle was rough for Daniele Sesta and the Frog Nation army, today has been a nightmare. And it’s not even lunchtime in Europe as we’re writing this.

For context, check out yesterday’s article, Malice in Wonderland. To get up to speed with the latest revelations, read on – a lot has happened in the past few hours.

This all still unfolding in real time, but here’s where the situation stands at the time of publishing:

It began with an ominous tweet from Daniele in the early hours of the morning.

Wonderland CFO Sifu has been doxxed as allegedly being Michael Patryn, co-founder of the infamously shady crypto exchange QuadrigaCX (not a good look), and a former identity fraudster (real name, Omar Dhanani) who spent two years in jail for his crimes (a terrible look).

And, it seems Daniele had been aware of his partner’s true identity for the past month or so, but nonetheless decided to give him the benefit of the doubt.

In the context of yesterday’s liquidation cascade (which had left many Frog Nation community REKT) the revelation proved a tough pill to swallow.

While there’s no evidence as of yet that can either confirm or deny either Sifu’s involvement in the price drop we wrote about yesterday, or any malicious action on his behalf, questions are circulating. One is about allegedly suspicious activity coming from a wallet understood to be Sifu’s.

Daniele’s judgment is being widely questioned. And his appeals for understanding from the community appear to be falling on deaf ears.

To add insult to injury, prominent voices in DeFi have been speaking out.

Frog Nation’s very own developer-extraordinaire, Andre Cronje, has pledged his support for Daniele. But he has also suggested his colleague’s error of judgment could be tantamount to “negligence”.

Before following up with an even more damning assessment.

Route2Fi, one of the most respected accounts on crypto Twitter, announced he’d lost confidence in the project, and would be selling his TIME holdings at a significant loss.

The community is by no means united in a Daniele witch hunt, though… His reputation in decentralized finance (DeFi) is being battle-tested right now, but Daniele’s reputation for integrity, and track record for community building are well established.

Earlier today, Daniele released a statement on the recent developments at Wonderland. While it didn’t offer much in terms of any concrete steps being taken, Daniele sought to dispel any FUD about Sifu’s opportunity to mismanage treasury funds (“ they are secured” by himself “and the Wonderland team”). He has also “decided that he [Sifu] needs to step down till a vote for his confirmation is in place”. You don’t need to be psychic to predict which way the vote is likely to go!

Right now, the Frog Nation and its associated projects are in a state of turmoil.

SPELL is losing its magic.

And $TIME holders continue to get REKT.

Clearly, this story isn’t about to blow over any time soon. We’ll be following it closely (and keeping you up to speed!).

This is a bad look for Wonderland. It’s also a bad look for crypto in general. Degens love DeFi. It’s in our DNA. But when things go bad, they can go really bad. We’re operating in an unregulated space, where the kinds of due diligence, insurance, and quality controls you’d find in legacy finance don’t apply.

The innovation in our industry may be unprecedented (in no small part thanks to Daniele himself!), but it also comes with serious risks. Blindly investing in projects, especially those with undoxxed leadership, is exposing you to potential dangers.

How this particular drama plays out remains to be seen, and perhaps sentiment will shift towards an overall suspicion of anonymous actors in positions of authority. Meanwhile, it teaches us a valuable lesson: be rigorous in your research, apply scrutiny, never invest more than you can afford to lose, and of course, be careful with leverage (or don’t use it at all!).