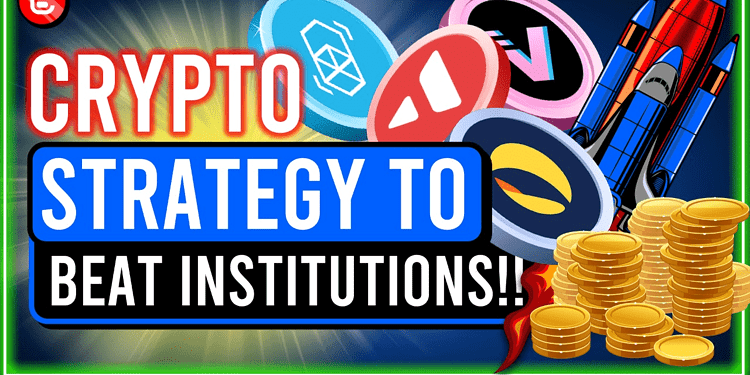 Front running the institutions is the opportunity of a lifetime!

The markets are bleeding. Your portfolios have taken a hit. And you might be fearing the worst. Which is why we hope you’ve read today’s article explaining what the hell is going on!

The markets are bleeding. Your portfolios have taken a hit. And you might be fearing the worst. Which is why we hope you’ve read today’s article explaining what the hell is going on!

Remember: when in doubt, zoom out.

That’s not even a reference to technical analysis!

Instead, it speaks to a bigger picture. Because sometimes you need to step away from the charts to see the story unfolding before our eyes. It’s huge. It’s happening. Everything else is just short-term noise.

Bitcoin might go up, down, or sideways. The best we, like all degens, can ever do is make educated guesses based on a range of macro factors, metrics, and indicators.

Here’s one thing we can be sure of: behind the scenes, almost all the major institutional players are getting involved. They’re quietly (and sometimes not so quietly) positioning themselves for an inevitable and exponential explosion in global crypto adoption.

In a recent article, we laid our thesis on why big money is coming to DeFi (and how you can beat them to it!). The yield opportunities are just too good! And there are some incredible new protocols out there that will fast-track this inflow of institutional money – Qredo, for example!

Pinch yourself, because you were here first. And you’re about to front run the smart money. Mass adoption is coming. It’s happening. And which protocols are going to make it possible? The Layer-1’s. From every angle, the road to mass-adoption is paved by Layer-1 blockchain technology!

But let’s take a moment to contextualize the sheer magnitude of the big-picture story playing out before us. To prove our point, we need only cast our minds back as recently as…last week.

Yes, this has ALLLL happened in a short seven days. During which many of the best known crypto players have been at an international conference in Miami. As they say… probably nothing. Right?

Gaming and metaverse are going mainstream

Microsoft acquired Activision Blizzard for $68 billion this week, calling the buy-out a crucial part of its metaverse strategy.

Adidas continued to explore the metaverse via an NFT collaboration with Prada.

Walmart revealed plans for a metaverse, native cryptocurrency and wallet.

Even Blackrock weighed in on the subject:

Yup, it’s been a busy week!

Coinbase announced it has partnered with Mastercard to facilitate people buying NFTs.

CashApp announced an integration with the Lightning Network.

And Sotheby’s revealed it plans to accept crypto for a rare (and massive) diamond!

Oh, and a major US mortgage lender, Milo, is now offering Bitcoin-backed loans.

Google is going in!

Intel is gearing up to launch its very own chip, expressly designed for Bitcoin mining functionality!

And across the world, governments and politicians are stacking sats!

Rio de Janeiro will begin allocating reserves to Bitcoin and offering a 10% discount on taxes paid in BTC. Incredible stuff.

New York City’s new mayor has begun receiving part of his salary in BTC and ETH!

And India, the sixth largest economy in the world, had its first Bitcoin ETF approved. Unfortunately, futures-based!

We could go on all day… There’s been so much news!

The point is that, as significant as each of these developments is, they’re not the really interesting story. It’s only when we put them all together – zoom out –  that we see the pace of global adoption is growing exponentially across all sectors.

While the Bitcoin price might be trailing down today, and despite the uncertain market conditions, looking at a longer time horizon tells us it’s impossible not to be more bullish than ever.

Crypto adoption is going parabolic. It’s going exponential. And it’s driven by institutions afraid of being late to the game.

There are trillions of dollars on the sidelines, ready and waiting to enter the crypto market. Because legislators, high-net-worth individuals, nations, brands, and funds are coming to terms with this unprecedented paradigm shift in global finance.

Your job right now is to frontrun them. Get there first, and stick around. Weather the storm and stomach this testing period! The market is designed to test your conviction and drive you away. As Sheldon always says, it’s the transfer of money from the impatient to the patient!

Your best bet is the top-tier Layer-1s. They are the protocols that will drive the rapid adoption playing out before our eyes. Hone in on those with network effects, growing developer activity, and relative strength. Remember, current prices may not reflect the tectonic shift in crypto and blockchain adoption playing out, but price is a lagging indicator!

Think about everything we’re seeing and allocate accordingly.

Where will institutions find the most attractive yield-bearing opportunities? The likes of Fantom AVAX, and Luna!

All roads lead to Layer-1s, and the market is presenting a life-changing opportunity to strike when prices are down. Dollar Cost Averaging into the top-tier protocols is likely to be the smartest play of all right now. That will allow you to get in at discounted prices and increase your exposure to their rapidly expanding ecosystems!

For a deep dive into why (and which) Layer-1s are the safest bet right now, and some incredible staking strategies to maximize your upside potential (while minimizing downside risk) during uncertain times, check out our article here!

The markets are bloody today. That’s part of their nature. The challenge is to seize the opportunity and make it work for you. Clearly, aping into low-cap gems is a risk too far in these market conditions.

The trick is to add exposure to proven, fundamental protocols that will not only survive this temporary downtrend (yes, all things must pass), but will absolutely rip when things flip bullish and give you maximum exposure to the next big wave without spreading your portfolio too thin!