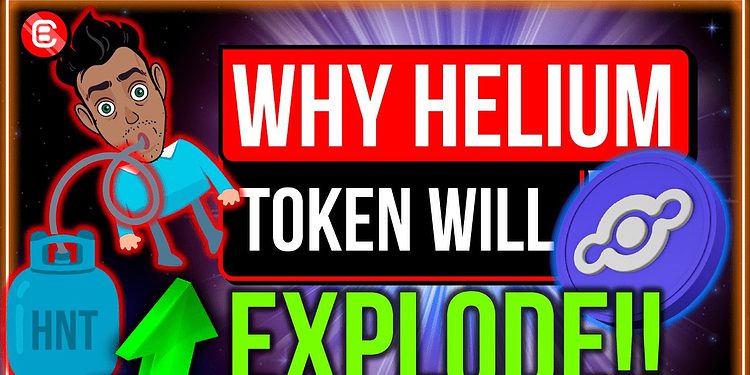 Helium is rising! And taking on 5G’s big boys…

There is a paradigm shift happening in the decentralized wireless infrastructure space. The smart money is already on it. Will you still sit on the sidelines, or get in on the wireless revolution? Introducing Helium….

There is a paradigm shift happening in the decentralized wireless infrastructure space. The smart money is already on it. Will you remain seated on the sidelines, or get in on the wireless revolution? Introducing Helium….

Helium is a global, distributed network of hotspots that together create public, long-range wireless coverage for long-range wide area network (LoRaWAN) of enabled Internet of Things (IoT) devices. Today, the Helium blockchain, with its hundreds of thousands of hotspots, claims to provide access to the largest LoRaWAN in the world.

Commonly referred to as the People’s Network, it is basically the world’s first peer-to-peer wireless network that provides a secure and cost-effective way for low-power IoT devices to send data to and from the Internet.

It is built on open source technology and is scalable, with total encryption from device to cloud, making it private and secure.

But is there a token?

HNT is the native token of the Helium blockchain. It is earned by users who provide hotspots, validate wireless coverage and transfer device data over the network.

Apart from the token, the blockchain also features data credits, which are used by devices to send data over the network and as gas fees. Data credits are created by burning $HNT, are non-exchangeable, and are tied to a single user.

The brains behind Helium

The Helium network has seriously smart investors and backers, including Multicoin Capital and Khosla Ventures. Always follow the smart bees, as Ran would say, because this is the easiest way to make money in this space. Having huge investors sure does instil a lot of confidence in a project.

You can mine the $HNT token using a hotspot originally built by Helium Inc. that is now being built by a growing network of approved manufacturers. There are three different ways to do it, depending on how much you want to invest.

For detailed information check out https://docs.helium.com/mine-hnt/.

Put a stake in it

You can also stake and become a validator, which secures the network, and earns you $HNT tokens. To run a validator requires a stake (deposit) of 10,000 HNT, and the ability to run validator node software in a suitable environment.

Validator nodes are a new entity on the Helium blockchain. These nodes perform consensus group work, including verifying transactions and adding new blocks to the blockchain.

Put it to work

The easiest way to experience the Helium Network is to use it. Connect your devices, and collect data in ways never before possible, at a fraction of the cost of cellular, without needing to deploy and maintain wireless infrastructure.

Helium’s biggest competitors are AT&T, Verizon and T-Mobile, which are well established in this sector. Helium claims that it has an advantage over its competitors in connectivity, pooling data and the ability to pay based on device usage only. Basically, decentralized beats centralized, because – clear cost base advantages.

The Helium Network is up and running in more than 350,000 cities and 150+ countries, and the network keeps growing daily. More than 75,000 hotspots were added in the 30 days to10 January 2022, which tells you that the project has epic support from the community!

One of the most exciting things about the Helium Network is how easily and efficiently it helps solve 5G industry issues at scale, by using blockchain for network growth. Real-world use cases, done well, are what is going to drive crypto and blockchain into the mainstream. Which is why projects like this are so important (as well as epically cool).

For example, wildfires are a huge problem in countries like the USA and Australia. An early wildfire detection network will definitely help curtail the losses that occur every year. SecureTool is using Helium to help manage wildfires in Tucson.

Invoxia is releasing a lineup of products that use the Helium network or GPS to help them track everyday items. Dog owners will be able to track their lost dogs with Helium – and monitor a slew of health metrics of their dogs (no, not doges, duh).

What does the smart money think?

The most unique aspect of the Helium Network is the fact that no money has been spent on spectrum or towers. All the nodes are inside people’s homes and purchased by the users. With Helium expanding to 5G, it is now in direct competition with the big boys in the field: AT&T, T-Mobile and Verizon. Crypto is really rocking a traditional old economy space here and competing head-on with some of the biggest and oldest in the US telecoms space.

Helium operates on the Citizens Broadband Radio Service (CBRS), which is why it has not had to pay to license spectrum, giving it another large cost advantage over other players. BUT this could also be a disadvantage: issues like congestion in the CBRS could pop up in the future because it uses publicly available radio frequency spectrum.

The road ahead is full of hurdles, as pointed out in Delphi Digital’s research, which Tom Shaughnessy released recently. Whether the team at Helium is able to successfully cross these barriers remains to be seen.

Helium founder and CEO Amir Haleem is understandably bullish, tweeting in April last year about Helium’s “30,000 Hotspots around the world”, and expecting it to rise to over 200,000 by the end of 2021.

Helium reached 450,000 public LoRaWAN radio gateways by the end of 2021, clearly demonstrating the real-life need it fills and the community support this project has.

While this is, frankly, the best-case scenario for Helium in the near future, such high hopes and aspirations do instil a lot of confidence in investors. Whether Helium can continue its upward trajectory by onboarding more and more users remains to be seen, however.

Helium is a fundamentally strong crypto project, with community support, and real-life use cases, that wants to revolutionize a traditionally old economy space. The fact that smart money investors like Multicoin Capital are so bullish about it is a good sign for the long term. It also ticks all the checkboxes that we look for in a project.

Ability to change the world? ✅

The growth of Helium as a network is evident with the number of hotspots increasing at pace around the world. This is an extremely good sign for a project which aims to revolutionize an entire industry by itself.

Crypto projects with globally working products that solve real-life use-cases and disrupt traditional sectors are usually strong movers in an uptrending market, and therefore usually a good addition to a HODL bag.