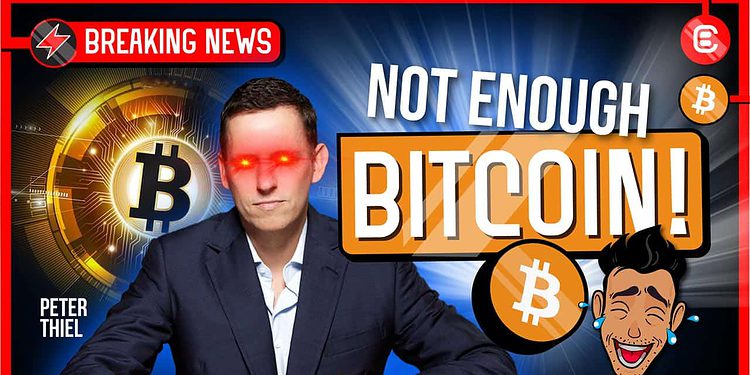 Here’s why even Peter Thiel doesn’t have enough Bitcoin

Inflation is at a “crisis moment”, central banks will go bust.

He didn’t buy enough of “secret” asset BTC as inflation is here to stay.

Is Bitcoin still a secret that should just be bought up?

Famous venture capitalist and billionaire Peter Thiel has admitted that he should’ve bought more Bitcoin and feels that it’s better just to HODL your BTC, as the central banks are at a “bankruptcy moment”. Thiel told Bloomberg on Sunday at a conference: “You’re supposed to just buy Bitcoin. I feel like I’ve underinvested in it…I think the answers are still to go long on Bitcoin. I feel that maybe it still is enough of a secret.”

Thiel strongly dislikes central banks, as do most in the crypto space. He claimed Bitcoin holders are sending a big old F*ck You to central banks.

“Bitcoin at $66,000… surely tells us that we are at a bankruptcy moment for the central banks.”

If a billionaire investor like Peter Thiel can admit he made a mistake by not buying more Bitcoin and that it’s still early days, then the rest of us surely aren’t doing too badly.

It’s important not to always try and time the market. Instead, look at the big picture and zoom out. Inflation is now a fact and it seems irreversible, with fiat money supplies increasing to keep economies afloat. Meanwhile, most cryptocurrencies’ total supplies are fixed, like Bitcoin’s maximum 21 million BTC which will be mined by 2140. This simplifies things.

Bitcoin’s still on target for a good Q4, if we look at what crypto prophet Plan B tweeted  last week:

Thiel’s statement underscores the ultra-wealthy investor’s need to get more BTC, but at the right price. This suggests long term bullish sentiments but possibly short term volatility as whales try to flush out retail investors.

If you believe Bitcoin or other crypto will be around in years to come, and will continue to go up while the Dollar goes down in value, then consider spreading your risk through investment strategies like dollar cost averaging, buying the dips on red days and get those diamond hands shiny. Just remember that in the short term all bets are off during massive traditional market volatility as well, as the March 2020 crash showed.