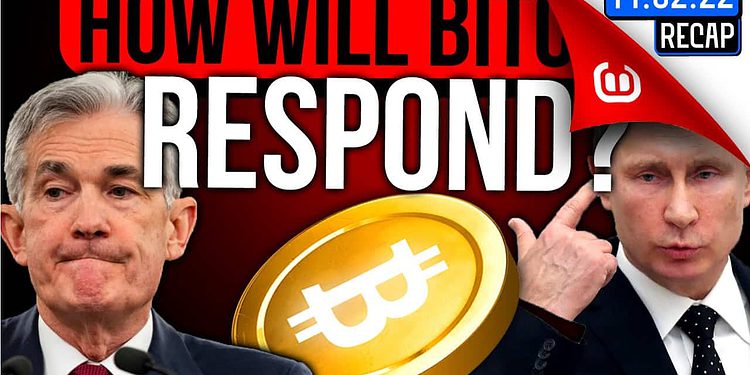 How will Bitcoin respond to the Russia/Ukraine conflict and the Fed emergency meeting?

Bitcoin has been battle-tested for a decade and has successfully survived everything that has been thrown at it. It’s always wise to amass hard assets during times of war, which is why gold has historically performed well during periods of geopolitical stress. Despite being the most difficult of assets, Bitcoin has traded like a tech stock. On the show today, Ran examined if Bitcoin might emerge like a phoenix from the ashes and win widespread adoption.

The market is still undergoing various dynamics and shifts in mood. The signs continue to imply that the bull market is still alive and well. However, recent global events have justifiably dampened investor expectations.

The string of events which have caused many people to rethink their minds about the market’s short-term prospects were highlighted in a poll on Twitter by Zhu Su (co-founder, CEO and CIO of Three Arrows Capital).

Stocks crashed on Friday when the US announced that a Russian strike on Ukraine was imminent, sparking a slew of debates throughout the weekend.

Due to the increasing concerns about a potential war between Russia and Ukraine, European stocks were crushed today, and this was a continuation of the decline which began on Friday.

There are two separate storylines emerging at the moment, one of which is that Russia will attack Ukraine and is being driven primarily by the US media, which is not the case on both sides, since both have stated that a war is not imminent.

The news of the conflict broke on a Friday afternoon, scaring investors and possibly triggering a fear strategy by the media to allow institutions to load the boat for Monday’s snapback.

Russia has attacked Ukraine previously, and the truth is that nothing happened, since there was no microeconomic impact.

The chart above shows a monthly chart of the stock market from the last time Russia invaded Ukraine in 2014, which showed that the invasion had little impact on the global market.

This is not to say that the same will happen again this time, but rather to point out that the media is exaggerating the invasion and blowing everything out of proportion.

Bitcoin enjoyed a long climb from $33k to $45k, but it required a correction as everything seemed to be going well, and the market became overbought. Bitcoin has seen a little pullback since the Relative Strength Index (RSI) was reset, but it has broken out of a sideways movement on the 4H chart, where it is attempting to achieve a new higher high.

The Bitcoin 12H RSI is nearly reset, and Bitcoin supremacy is seeing a dip, reversing a short-term trend, allowing altcoins to catch up.

What’s interesting is that Bitcoin used to move in lockstep with the NASDAQ, like a tech stock, but now it’s starting to decouple, with Bitcoin rising while the USTech100 falls.

The USTech100 is up 3% from its latest low daily close on January 25th, while Bitcoin is up 28% from the same day’s low daily close. This indicates that Bitcoin is gaining momentum, which is a fantastic indication as it forges its own route to independence.

Bitcoin dominance may be down a little today, but on a larger scale, the chart indicated that something major was about to happen in Bitcoin’s favor, even though no one realized it would be news of a possible invasion.

This week will see a lot of volatility as the volatility index (VIX) begins to break out to the upside, which might spill over into the cryptocurrency market.

The Fed meeting to combat inflation

The Federal Reserve (Fed) called an emergency meeting for Monday 14th February to discuss the monthly inflation report, which came in at 7.5%, the highest level in 40 years.

Traders are concerned that the Fed will move to raise rates before the next meeting, and the endgame appears to be near.

The public’s confidence has plummeted as a result of fears that the Fed will raise rates due to the emergency, despite the fact that the proposed meeting is not really an emergency meeting, but rather a regular meeting held over the past few months.

The market is beginning to price in the expectation that the Fed will raise interest rates by 50 basis points (0.5%) in March, which is higher than previously expected. However, before that happens, the February inflation figures will be released, which will have an impact on the Fed’s decision.

Chamath Palhapitiya pointed out that one factor which isn’t getting enough attention is the fact that the market reacted to one of the Fed’s governors announcement of a 100-basis-point rate hike by July.

However, with consumer sentiment deteriorating, and consumption shifting from goods to services, as well as macro sentiment driving markets lower, now is a good time to invest.

On CNBC a few hours ago, James Jim Bullard, president and CEO of the Federal Reserve Bank of St. Louis, stated that the Fed needed to “front-load” tightening because of inflation.

In essence, he is stating that he intends to spread the motion of rising interest rates by 100 basis points (1%) by July, and the markets have reacted, albeit in a little way.

Both the Fed raising interest rates and Russia invading Ukraine have already been priced in, and the possibility that neither of these scenarios will occur is a significant positive for the market.

The hash rate of Bitcoin refers to the amount of computational and processing power given to the network by miners. It’s essentially a measure of how secure the Bitcoin network is thanks to miners.

The Bitcoin hash rate has surged, and it is now at all-time highs, following months of misery caused by China’s ban on Bitcoin mining, citing concerns over power use, which caused both the hash rate and price to plummet. Miners had to migrate from China to more favorable countries.

While the hash rate exploding may not be a bullish indicator for Bitcoin price, it does provide insight into how much individuals are investing in Bitcoin mining over the long-term.

However, there is another way to look at Bitcoin: from the critics’ viewpoint that Bitcoin consumes too much electricity, which is correct.

According to a survey published by the UK financial site MoneySuperMarket, each Bitcoin transaction requires 1,173 kilowatt hours of electricity. This is the equivalent of the amount of energy required to “power the average American home for six weeks.”

According to reports, 117 million people tuned in to watch the Super Bowl, the National Football League’s annual postseason championship game, which was between the Cincinnati Bengals and the Los Angeles Rams this year.

The Super Bowl is one of the most prestigious commercialized events, and this year’s edition was dubbed the Crypto Bowl due to the presence of six cryptocurrency adverts, which is unusual in the business.

Advertisements during the Super Bowl normally benefit from the large audience, and some crypto firms are beginning to welcome the influx of new users into the cryptocurrency world.

The $16 million Super Bowl ad was the highlight of the day, effectively giving the exchange massive exposure, as the exchange app rose from 186th to second place on the App Store after the commercial.

The great FTX exchange campaign was another ad which came in second on the ratings, as more crypto companies aim to offer crypto services in order to enhance adoption.

No-one can predict what will happen to the market, so don’t start studying to become an international policy expert just yet. However, you are making a mistake if you invest based on unfavorable events, such as the Fed rising interest rates and Russia invading Ukraine, all of which are already priced in.

Instead, you should consider unanticipated developments, such as the Fed not raising interest rates or Russia not invading Ukraine. These are non-market relief events that could have a significant impact on the market’s trajectory.