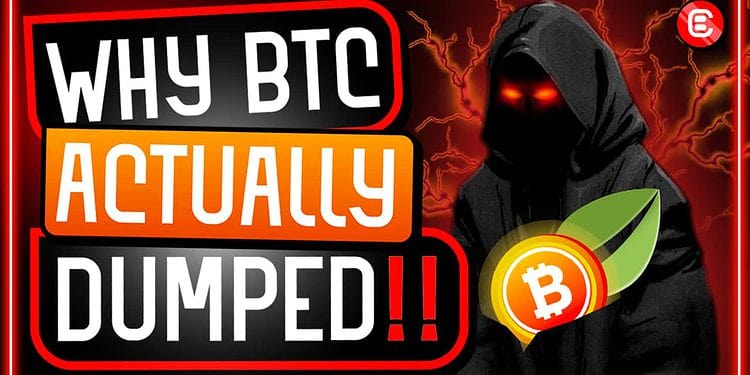 If Meta isn’t the real reason behind the Bitcoin dump, then what was?

Yesterday came with a series of unfortunate events: first, the long-awaited Meta earnings report spooked the NASDAQ. Then a wormhole hack wrapped the crypto market in discomfort. Tech stocks dumped hard. Bitcoin too. But was the Bitcoin correction due to either event?

Yesterday came with a series of unfortunate events: first, the long-awaited Meta earnings report spooked the NASDAQ. Then a wormhole hack wrapped the crypto market in discomfort. Tech stocks dumped hard. Bitcoin too. But was the Bitcoin correction due to either event? Or was there something else going on? Maybe something ominous? Perhaps, even, a lingering threat that has followed Bitcoin for almost half a decade.

Once upon a time…

The 2016 Bitfinex hack was the biggest Centralized Exchange (CEX) security breach in history. 119,758 BTC were stolen in the exploit. And this five-year old event still reverberates to this day. Why? Because each time those funds make a move, the market reacts (even though the BTC funds were blacklisted, so would be pretty difficult to sell). Bitcoin moves on social indicators, and this one could have made a dent in the price!

What happened this time?

On February 1st, Bitfinex hackers moved approximately 94,000 BTC, and the market reacted.  Something very similar occurred in April 2021, when a wallet containing blacklisted coins  moved 94,643 BTC, prompting a market-wide reaction to the downside.

Should we be scared?

There’s nothing more unnerving for a trader than seeing large amounts of BTC being moved. Because the stolen Bitfinex BTC is tainted, and blacklisted, it can’t be easily exchanged. And despite on-chain data showing strong signals across key indicators like ‘Bitcoin Hodler’ or ‘Coin Days Destroyed’ (CDD), that data could be meaningless to Bitcoin’s macro-trend!

Then why did Bitcoin drop suddenly during yesterday’s Crypto Banter show? Any Bitfinex BTC move strikes fear in the market, with the potential of triggering a cascading event, as investors (or bots) exit their positions.

Furthermore, with the Chinese Lunar New Year in full effect, hackers could manipulate the market as Asian volume decreases. There is the potential for steeper downside price action, but that would likely only be temporary. Moving from wallet to wallet is one thing, but the bigger concern is if these assets could eventually be exchanged.

Crypto markets can change quickly. The $3.5 billion worth of BTC assets can’t be exchanged without having a KYC’d account on a centralized exchange. The BTC stolen are blacklisted, and perpetrators will be caught. But what if DeFi is their gateway to exchange most of the funds?!

A new thesis has emerged: perhaps other protocols and crypto crowdfunding efforts could allow the funds to be manipulated and traded. ThorChain, for example, could provide a gateway for the funds to be exchanged. Hackers could add assets to ThorChain and wait for the market to keep re-balancing the funds, then Tornado Cash as a faucet (but they sure don’t want the attention).

It raises a larger question: Is this the trade off of decentralization that we, as an industry, are going to have to accept? How do you stop bad actors from interacting with a decentralized market? You can’t, because then the network would have to implement some of the features of a centralized one. If, indeed, hackers find a way to exchange funds and slowly convert all the assets, then Meta’s Q4 earnings effect on NASDAQ would be the least of our worries, because it will seriously spook an already shaky market!

The Bitfinex funds are the most tracked BTC on the planet – there’s no way any centralized exchange will accept them. If hackers could leverage privacy Layer-1s or privacy-oriented DeFi protocols to make the swaps anonymously, they could be able to siphon out their winnings.

Should this ever happen, the entire market could tank – in the short term!