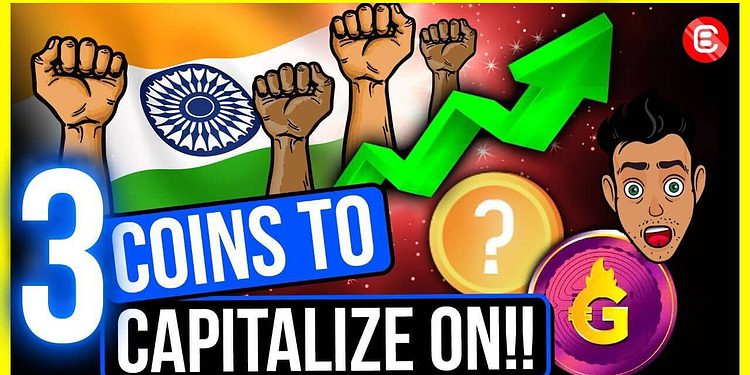 India FUD has been put to bed (once and for all) and these coins are on our radar!

This is big stuff. India is one of the largest (and fastest-growing) economies on the planet. And it’s been at the center of anti-crypto FUD forever!

India Fud is old news. It’s been circulating for years!

But, in a breakthrough moment for the crypto industry, Indian Finance Minister Nirmala Sitharaman declared (during her budget speech) that income from crypto trading would be taxed at 30%, thus indirectly giving digital assets an official thumbs up.

This is big stuff. India is one of the largest (and fastest-growing) economies on the planet. And it’s been at the center of anti-crypto FUD forever!

This needn’t be the case. Quite the opposite. In fact, India is brimming with crypto potential: it should be at the epicenter of the global blockchain industry. Not only does it have a young, tech savvy population and some of the finest engineers in the world, it also exists at the crossroads between innovation and need: it may be one of the largest economies on earth, but tens of millions of its citizens remain unbanked. And with over a billion people dispersed across so many regions, the logistical challenges are enormous. India represents the perfect synthesis between technical potential and real world use-cases!

So, in light of this tacit acceptance of crypto’s legitimacy (if not full embrace), let’s take a look at a few projects coming from India that might be worth paying attention to: if they haven’t already, they may well benefit from changing sentiment at the very top.

While most rejoiced at the indirect legalization, others were quick to point out that the 30% blanket tax (without deduction) is not only unfair, but also way higher than it should be (short term equity gains are taxed only at 15% in India.)

So, pro-crypto? Or anti-crypto? Clearly, the tax authorities are keen to earn their unfair share.

We’ll keep monitoring the situation and bringing you updates along the way, but in the meantime, let’s take a look at some of the most promising crypto projects coming out of India that could reap the rewards of this improved sentiment from the authorities!

And as you’ll see, they’ve all been pumping like mad.

Polygon is a Layer-2 scaling solution for Ethereum that needs no introduction.

It’s native token, MATIC, is sitting almost 44% below its all time highs and is listed on all the major exchanges. We’re not saying that the Government’s policy will change MATIC’s fortunes in any serious way, but if Indian retail (now confident a ban is unlikely) is going to flock to any token, it could be this!

Founded by Nischal Shetty, WazirX is currently the largest crypto exchange in India.

Acquired by Binance in 2019, it was also one of the first exchanges to offer purchases with the Indian National Rupee (INR).

It’s native token is WRX, and the Indian government’s kind-of-pro-crypto stance is clearly bullish for all Indian exchanges, as evidenced by a recent spike in volume on WazirX. WRX is of course listed on WazirX, as well as Binance, and several other popular exchanges. The WRX token saw a jump of more than 1000% in 24 hour trading volume. And volume across social media spiked!

New kid on the block is the Gari Network (GARI), and its social token (for the community of Chingari creators) offers governance rights over future platform developments through a DAO, and also creates a circular economy.

Chingari is a micro content, short video application similar to TikTok. It recently made headlines as trading volume hit $100 million in the first 24 hours of its listing on various exchanges like Huobi, FTX, KuCoin and many more. With over 110 million downloads of the app, Chingari has seen a two-fold increase in its number of users since April 2021. And it currently boasts 35 million monthly active users, a figure that could be dwarfed in the coming months.

Crucially, it’s yet to be listed on many Indian exchanges yet (which could prove a great opportunity!). Is it a buy now? Wait for the pullback!

With this tacit nod of approval from the Indian government, don’t be surprised to see a swell of retail activity from one the largest countries in the world (both in terms of population, and the size of its economy).

Further, you can also expect to see projects with Indian teams behind them enjoy some upside action – they already are. Having said that, remember: never buy into a pump and as always, Do Your Own Research (DYOR).

But there’s a bigger point to all this: India needs blockchain as much as blockchain needs India. Until now, the local industry has been stifled by endless Fud, and looming threats of an all-out ban. This may not represent a full U-turn from the Government, but it’s a first step towards crypto-tolerance. Very slowly, the tide will turn. Blockchain is inevitable. And at some point, India could, should, and probably will be at the very pinnacle of its development.