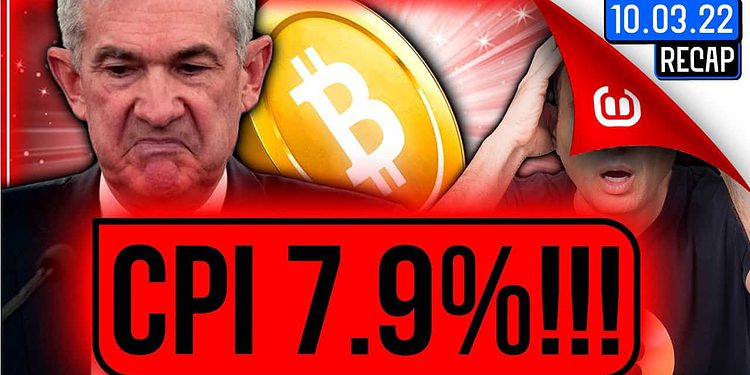 Inflation in the United States just set another 40-year high: How will it affect crypto? The answer could surprise you

Worried about inflation? Ran explained everything you need to know in this afternoon's show.

The rate of inflation is rapidly increasing! The Consumer Price Index (CPI) is at its highest level in 40 years, and commodities are also going parabolic! What will be the reaction be of cryptocurrencies to the news? And will they ever react like the Gold 2.0 hedge that was promised?

Ran looks into the most likely consequences for crypto following these outcomes on today’s show.

Technicals show that the market has been in a downtrend for 121 days, indicating that this is a bear market rather than a bull market.

The truth is, bear markets create millionaires, and you should look to make the most of it. However, most people are unaware of this, and The DeFi Hedge generously explains why in a tweet.

Bitcoin and a slew of other major cryptocurrencies saw large overnight gains in a stunning move yesterday, in reaction to a leaked press release from US Treasury Secretary Janet L. Yellen, outlining the government’s plans to regulate the industry, as Mark Yusko pointed out.

There is a correlation between the crypto market and the stock market, specifically the NASDAQ, which reached its high 14 days after bitcoin’s and has been in a slump ever since.

Another tweet from The DeFi Edge featured a sample portfolio to help figure out balance based on stables, low-risk, medium-risk, and high-risk plays.

Inflation exceeds levels not seen in in 40 years

The Consumer Price Index (CPI) for February in the United States was 7.9%, the highest in 40 years, exceeding January’s figure of 7.5%.

We all know that the quoted figure is false, which is hilarious. The new number is 7.9%, and that’s the one they’re telling you. When you look at the genuine products people buy, you’ll notice that costs are sky-high.

What effect does the rate of inflation have on the market? The truth is that inflation numbers aren’t actually that important, but they are a topic of debate because the Federal Reserve (Fed) uses them as a basis for making choices to combat inflation, such as raising interest rates, something which is about to happen.

That said, we could be in for a surprise if the interest rates increase more than anticipated, and the market will react badly, albeit there are more possibilities that the increase will be 0.25%.

The Fed has been buying bonds to invest in the market (about $6 trillion), which has caused the bond market to become overpriced. They stated that they will no longer be purchasing, and will instead be selling, which is already taking place.

The Fed ceased buying bonds on Wednesday, and will begin buying mortgage-backed securities on Friday, signaling that the era of the Fed pumping money into the economy is drawing to an end.

Commodity prices have been growing exponentially since the beginning of 2022, according to the Goldman Sachs commodities index. The commodities market began the year around 550 and is now trading at 758, which is worse than yesterday’s level of 850, pushing inflation even higher.

The narrative has continued to shift as the numbers rise because there is nothing the Fed or the government can do to truly battle inflation.

War tension between Russia and Ukraine

The battle between Ukraine and Russia has been a media game to spread opinions, and Ukraine has so far won the war in the west. During a war, the media expends a great deal of effort in presenting and shaping public opinion.

This is because the shift in public opinion causes citizens to exert pressure on their government when it comes to negotiating. As a result of the conflict, oligarchs are beginning to suffer.

The government has sanctioned Russian billionaire Roman Abramovich, and his assets, including Chelsea Football Club, have been frozen.

Although there are reports that Chelsea might still be sold and that bidders are still interested, the situation is tricky because it rests on Abramovich’s willingness to allow the UK government to effectively take over the process.

The events of 2022 have thus far served as a stimulus for people to join the crypto hive, as the government’s policy violations are pushing people’s hands.

Because of the enforcement, regulations, and censorship, Bitcoin skeptics are now pro-crypto. As a result, more and more people are turning to crypto in search of a new and better financial system.

Pro crypto moves by the US government

While a leaked press statement from US Treasury Secretary Janet L. Yellen, revealing the government’s plans to regulate the industry, has gotten encouraging reaction,

The White House executive order putting importance on the study and development of a prospective United States CBDC has slipped under the radar.

The CBDC is unfavorable because, as the Bank of England has stated, digital cash can be programmed to ensure that it is only spent on necessities or commodities that an employer or government deems appropriate.

The deployment of digital banking ultimately implies that you can only spend this digital cash where the government tells you to, giving the government complete ownership and control over the money.

Crypto is gaining traction, adoption is on the rise, and it will continue to thrive because this is a unique time. The government and banks were overtly against Bitcoin and cryptocurrencies during the previous bull cycle, but this time is different.

The US executive order favoring cryptocurrencies is a huge breakthrough, as more people will use crypto, and South Korea’s newly elected president is pro-crypto. Dubai has also established a new legal framework for cryptocurrency trading.

This isn’t the same as 2017 when policymakers were hostile, which is why a two-year bear market is unlikely.

During bear markets, real money is made, but no-one offers practical advice other than “buy the dip” and you may be unsure what to do because no-one has unlimited funds.

To get the most out of a bear market, you have to stick it out since you won’t be able to reap the benefits of the next bull cycle if you fuck it up now.

Crypto will continue to break new ground and reach new highs, but not all projects will succeed. That is why it is critical to maintain proper positioning.