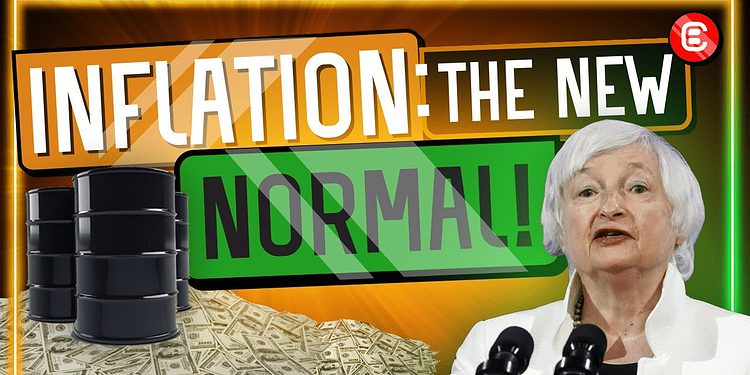 Inflation: welcome to the future

When November’s Consumer Price Index (CPI) data came in at a 40-year high, the Federal Reserve’s (Fed) response was, we all agreed, inevitable.

When November’s Consumer Price Index (CPI) data came in at a 40-year high, the Federal Reserve’s (Fed) response was, we all agreed, inevitable.

How quickly things can change. We now have a different picture.

Inflation is still rising, and fast. And yet, it could be risk-on time again.

Perhaps Bitcoin will lead the way.

Macroeconomic data has reinforced an overheating economy, and noise from the Fed had alluded to a 1% rate hike by June, with as much as 0.5% in March.

The Russia/Ukraine conflict has contrived to change the picture. Aggressive rate hikes are off the table. Inflation is the new normal.

The Fed may now have its hands tied, supply shocks have seen commodity prices sky rocket, and investors are looking for a safe haven.

The question is: Will “digital gold” emerge as the ultimate risk-on safe haven?

The picture has changed

And it’s time to re-evaluate.

In a recent article, Ran laid out a thesis: namely, how Russia’s invasion of Ukraine could prove a bullish case for crypto.

In the three days since its publication, a range of developments have further reinforced this thesis, and the case for a risk-on bull run grows ever stronger.

The war has trumped inflation. The Fed is no longer in a position to be as aggressive with their monetary policy, and the Federal Open Market committee (FOMC) will have to tread carefully.

In the land of the blind, the one-eyed man is king.

Whilst we cannot predict the exact course of action the FOMC will take, we can use the data at our disposal to analyze the situation (and re-evaluate accordingly!).

Rampant inflation: learning to live with it

If trading and investing were easy, everyone would make money. There is no traffic light system in play when it comes to making investment decisions. The picture is constantly changing, and to make money consistently, we have to remove the emotion and maintain flexibility in our thinking.

However, the current geopolitical and economic narrative has created a unique set of circumstances that require a new thesis.

When the world got hit with Covid 19, we all had to adjust (and learn to live with it).

Today, the world is coming to terms with a new conflict, and the possibility of serious, long-term inflation resulting from a huge surge in commodity prices.

Commodity prices have made (and will continue to make) astronomic gains, and the end consumer is going to get hit hard. Crucially, the Fed can’t do much to bring prices down either.

In the absence of higher rates to attract money into the safety of the bank, what will investors turn to?

They will no doubt, look for a flight to quality.

Initially we saw a surge in gold as investors looked for a safe haven on invasion day, but since then, bitcoin has held up well enough for a new term to emerge: a risk-on safe haven.

How to play the current market?

Looking back to last week’s “tale of the tape”, we saw a phenomenal intraday market reversal. As our article points out, both the Nasdaq and S&P closed higher after being down 3% intraday. bitcoin rallied from $35k to $39k as a result of high demand (and high volume!)

Could there be more downside in the short term? Of course there could. But as Tedtalksmacro put it so well, and as we’ve continually written about in recent weeks, the time to de-risk has passed: it’s too late to do so now, when the upside potential massively outweighs the downside risk.

Will the inflation pandemic spread around the world?

Nobody knows how the conflict in Europe will play out. It could continue for several weeks or months. As the West prepares for a period of sustained inflation (and bitcoin jostles for its place as a risk-on safe haven), Russia may find it harder to cope.

In an effort to avoid a run on their banks, Russia’s central bank has just doubled interest rates. Doubled them!

Meanwhile, the Russian ruble has lost 50% of its value against the US dollar since the start of the year.

With inflation at 69.4% and a severe currency devaluation in progress, could Russia be heading for a hyperinflation cycle that sees them paying for loaves of bread with wheelbarrows full of cash?

Just a week ago, the threat of war and interest rate hikes were determining investor sentiment. Fast forward to February 24th: Russia invades Ukraine. Gold spikes. Bitcoin, along with traditional markets, crash, only to then mount a spectacular reversal. Now, to the present day, gold has dipped, and Bitcoin has stabilized (along with financial markets).

Data showed us that record amounts of stablecoins had been on the sidelines, and large portions were quickly deployed on the news of Russia’s aggression. With investors assuming a sustained period of high inflation is inevitable, risk-on could be back on. And we could be about to resume the trend that ended in November, when the first outrageously high CPI data was revealed.