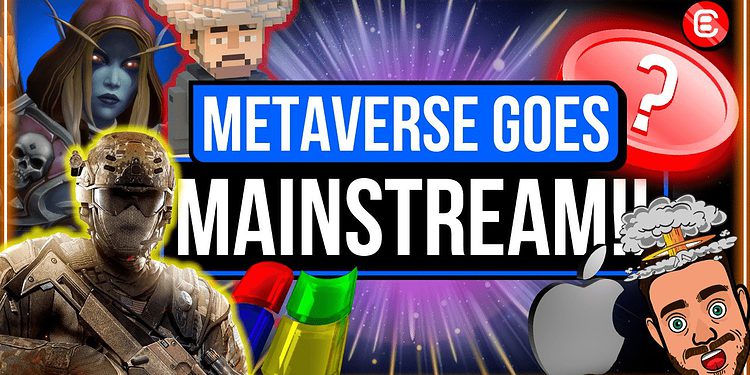 Institutional money is making serious metaverse-moves. Get ready to front run them!

Hustle’s been busy networking at the North American Bitcoin Conference, and he’s telling us that the hottest topics around aren’t Bitcoin, Ethereum, or even Floki Inu. Everyone's talking about the metaverse, gaming, and NFTs.

Hustle is living it large in Miami. But that doesn’t mean he can’t find time to deliver alpha for the Banter Fam. Not our Hustle. As long as that guy’s got an internet connection, he’ll find a way!

In yesterday’s show, Hustle went in! He talked about the catalyst to kick-start the next leg of the metaverse and gaming bull run. And we’ve got to say, it’s gotten us pretty excited.

Hustle’s been busy networking at the North American Bitcoin Conference, and he’s telling us that the hottest topics around aren’t Bitcoin, Ethereum, or even Floki Inu. Everyone’s talking about the metaverse, gaming, and NFTs.

And everyone wants to know the same thing: what’s going to be the spark – the rocket fuel – that sends them to the moon? And which tokens are positioned to pump the hardest when it happens?

The institutions are coming

Just look around you. Yesterday, Microsoft announced a major move: acquiring gaming titan Activision Blizzard for $68.7 billion! This is huge for both parties (Activision Blizzard’s catalog contains some of the biggest games on the planet, like World of Warcraft, Call of Duty and Overwatch). But it also speaks to the inevitable coming together of mainstream and blockchain-based gaming.

The official press release described the acquisition as accelerating “the growth in Microsoft’s gaming business across mobile, PC, console and cloud and will  provide building blocks for the metaverse”.

Translation? We’re coming for you, Zuck.

I mean, you didn’t think they were going to let him go unchallenged, did ya?

Remember, Meta was the first company to re-pivot its branding towards the metaverse, but it won’t be the last.

Remember when Facebook announced its name had changed, and triggered an epic pamp? Of course you do.

So just imagine what happens with the next major announcement from the other tech titans?

Metaverse tokens like SAND, BLOK, and MANA will pamp.

Gaming tokens – especially if they’re metaverse-plays like PYR and SYN -) will pamp.

The tokens representing the picks and shovels of the metaverse (RENDR anyone?) will pamp.

Basically everything will pamp!

Who else is ready to play?

As Hustle puts it, there’s more institutional interest in the metaverse than in any other area of crypto. And if this is the first big step in Microsoft’s metaverse play, then what are the wider implications? Surely, Facebook and Microsoft aren’t the only two tech giants looking to participate (and dominate!) in the next big thing?

Amazon could, should, and probably will be next. Why? Because it’s the global leader in e-commerce. Jeff Bezos practically invented online retail as it is today. And what’s the next logical progression? Shopping in the metaverse, obviously. If Amazon doesn’t do it, others will. Poor Jeff Bezos might find himself getting divorced for a second time!

Just imagine molding yourself into the metaverse…the shopping possibilities are endless. Why go to the store when you can try on clothes in the metaverse? And once the technology gets there, touch the garments, feeling the fabrics as though real? Chances are you’d do the majority of your shopping from the world’s largest, best-stocked mall – your bedroom.

And just imagine molding your property into the metaverse. There’d be no need to guess what that new sofa or kitchen installation would look like in your house, because you’d be able to see as you swipe through the range of available options.

Apple might have remained (strategically) quiet about its plans for the metaverse, but don’t take that to mean it’s not planning to raise the game. Why? Because that’s what Apples does.

Apple’s whole mission is to take things and perfect them.

When Microsoft was dominating with Windows-based computers, Apple came along and developed a sleeker, more elegant, (and arguably!) more intuitive version.

Believe it or not, there was once a time (not too long ago, either) that this was cutting edge!

As for phones? The iPhone came along in 2007 and decimated the competition. Apple revolutionized touchscreen technology, and for the first time, we had smartphones that were actually, well, smart.

Apple takes everything to the next level. The chances of it staying out of the metaverse, especially when Microsoft and Facebook are already jostling for pole position, are practically zero.

Behind the scenes, all the tech giants are doing the same thing: Building, building building… and striking partnerships. Some we know about, like Microsoft’s acquisition of Activision, or Amazon’s collaboration with the WAX blockchain and the Dibbs NFT trading platform. Others have yet to be revealed.

If you don’t think that Amazon and Wax are working together to build infrastructure for a potential metaverse-based e-commerce experience, you’re missing the bigger picture.

They’re all at it.

Only yesterday, we saw rumors swirling that Google, following partnerships with Coinbase and Bitpay, was planning to allow users to store crypto assets on a digital card!

Once Apple has a crypto wallet integrated into your iPhone, it’s game over for the crypto skeptics – and that’s where this is headed. When the barrier for entry is low enough for even your grandma to HODL Bitcoin with ease, we’ll have finally crossed the threshold into full-blown mass-adoption.

Before long, we’ll see the metaverse being adopted across a range of sectors and integrated into our everyday lives. Just imagine teaching (in the metaverse!) kids across the world without access to education. Or training engineers! Doctors! The sky’s the limit. It’s happening. And best of all, you’re early.

The catalysts are coming.

If you’re in this market and actively investing in legitimate projects with real utility and strong teams (games, studios, blockchains, or the picks and shovels of the metaverse) then you’re one step ahead and actually front-running these institutions. Once the catalysts are triggered, the pamps will be epic.