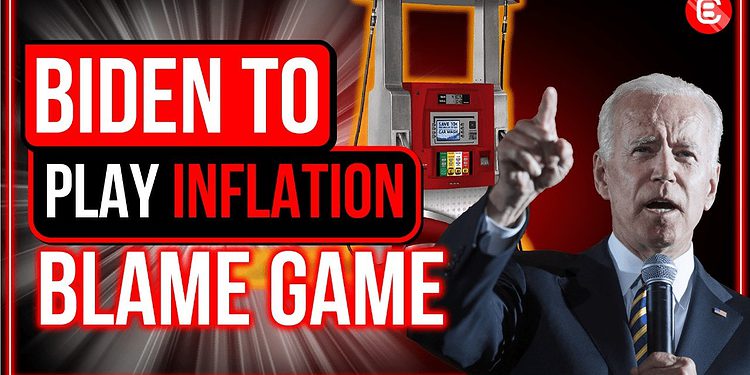 Is Biden pointing fingers overseas to distract from domestic issues?

But Joe Biden may have an unlikely solution. The perfect scapegoat to attribute to all these soaring prices: Russia.

The US is suffering from the highest inflation in 40 years, with Consumer Price Index (CPI) data earlier this month coming in at 7.5%.

The solution? The Federal Reserve (Fed) stated its intentions of introducing a series of interest rate hikes and quantitative tightening. The challenge was always to do so without triggering a stock market collapse, not least during an election year.

But Joe Biden may have an unlikely solution. The perfect scapegoat to attribute to all these soaring prices: Russia.

Nonetheless, it appears the government are willing to risk playing the blame game, and in a speech yesterday, Biden revealed his hand: the Russia/Ukraine conflict could be the ultimate ‘get out of jail free card’ to play in light of spiralling inflation.

With Russian President Vladimir Putin signing a decree to recognize two separatist regions of the Ukraine as independent states, the world’s eyes are all on the ensuing tensions between Russia and Ukraine.

Biden made it very clear that all the actions they are taking are purely defensive and they have no intent in fighting Russia, reassuring their NATO ally that they are there to assist.

The US Commander-in-Chief discussed a raft of sanctions, which include a full block against two of Russia’s largest financial institutions, the VEB bank and the military bank (Promsvyazbank), as well as a move to totally cut Russia from the Western financial system by disallowing them to trade in new debt.

The US is also set to impose sanctions targeting Russia’s elite and their family members, whilst also working with Germany to prevent the Nord Stream natural gas pipeline from going forward.

However, as Joe suggests, these measures will come with a cost. And US citizens may be forced to foot the bill!

If there were any doubt that the US government might seek to harness the Russia/Ukraine conflict for political purposes, Biden’s speech didn’t do much to confirm otherwise, as he segued into talking about inflation and commodity prices, and how the situation could see them rise further still.

Not a great look, but Biden was clear that he wanted to address this, saying: “I want to limit the pain the American people are feeling at the gas pump, this is critical to me.”

However, he also appeared to acknowledge that the Ukraine conflict may make it easier said than done.

After all, “Defending freedom will have costs for us as well here at home”.

Biden went on to say that robust action is being taken to target the Russian economy, and not the US economy, and they are closely monitoring energy supplies for any disruption by “executing a plan in coordination with major oil producing consumers and producers toward a collective investment to secure stability in global energy supplies”.

With the midterms coming up later this year, the return of Cold War-era politics could serve an important purpose: shifting the blame on domestic economic issues to an overseas adversary.

The Federal Reserve’s mandate is to manage inflation. A US president, meanwhile, needs to preside over a seemingly healthy market in the run up to an election, or risk facing defeat. At present, neither can do their job without impacting the other’s ability to do theirs.

In light of the unfolding global situation, there has been speculation around the degree of anticipated rate hikes US investors might expect across the year.

As for quantitative tightening, it remains a case of “Watch what they do, not what they say.” As evidenced by this chart!

If Biden’s speech is anything to go by, don’t be surprised to see inflation continue to soar, and blame be deflected to the Russia/Ukraine border, at least until the elections are over. Subduing the economy too much could be a costly political mistake. If people feel rich, they don’t vote for change, and it could be the make or break between keeping (or losing!) the Democrat Party’s slim majority.

Will we see the hawkish language muted for a while? Already, the chances of aggressive rate hikes seem to be plummeting!

This is all speculation, but it would appear that the US has been driving the narrative surrounding the imminence of a full-scale invasion, which is yet to take place.

The fear of imminent conflict will drive up the cost of energy, which could pave the way for the Fed to postpone slowing down the American economy (and potentially even provide stimulus on the way).

If Biden wants to keep the economy moving fast, he needs to keep interest rates low, and the balance sheet high: Russia/Ukraine tensions could be the perfect justification for doing so.