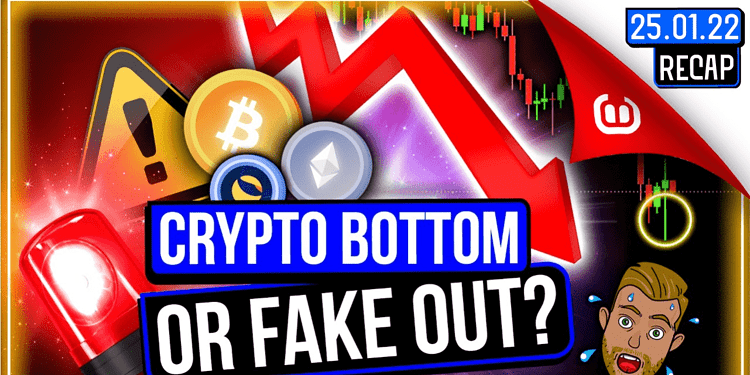 Is the worst of the crypto market behind us?

Bitcoin appears to have found some support in the form of a horizontal confluence as well as an ascending trend line dating back to 2017.

Bitcoin appears to have found some support in the form of a horizontal confluence as well as an ascending trend line dating back to 2017.

However, at $40k, it is still below an overhead support. Will we be able to bounce? Will the ruthless dumping continue? Sheldon reviewed the current state of the market in our morning show, and shared how he intends to proceed with this approach.

The market can move in three directions: upward, downward, or sideways, and it’s critical to identify the trends in play and how to approach it.

It was in an uptrend three months ago, but has been in a downtrend since then, and a sideways movement is always possible. Different trends movements help you better understand the volatile crypto market, and how to approach it at various times.

The current downward trend is a reactionary one, that is allowing the big folks to maneuver and load up for the next rise by flushing out weak hands.

Technically, due to panic, the Bitcoin price has been making lower lows. There was a significant acceleration to the downside last week, with the stock market plunge serving as a catalyst.

Bitcoin appears to have reached a stalemate at $33k, which was lower than expected, but the market is quite sensitive, so sell pressure increased, resulting in a worse drawdown.

Bitcoin is currently ranging as it did previously between 2019 and 2020 in a similar percentage ratio before taking off, although on a larger price scale. If it drops to $29k, it will most likely continue in a head-and-shoulders pattern, with the left shoulder and head virtually complete.

Taking profits is recommended if the right shoulder formation begins to play out. Be warned though, that it might take a few months, because the next leg down could take Bitcoin below $20k.

Bitcoin is still in a downward trend channel on a lower time frame, and it might potentially make lower lows, as long as it can’t break out of the channel resistance at $42k.

However, in the event that Bitcoin breaks over the downward trendline resistance, it would form a higher high in the coming month. This would scream back on us that the drawdown was a buy-the-dip opportunity, and many should not have capitulated.

If Bitcoin bottoms out at $30k it makes a lower low in the downward channel. If Bitcoin can break through the $45k barrier, it will be confirmed that it is on its way to reclaiming its all-time high.

Bitcoin dominance and the stance on altcoins

Bitcoin dominance is rising, while altcoins are plummeting. This is due to the fact that Bitcoin’s price is recovering faster than altcoins, as predicted on the show some time back, because the market needs to gain confidence before investors begin to show more conviction and invest in altcoins.

However, due to a confluence of fundamentals and a shift in market narrative, Bitcoin dominance is not expected to reach 50% again, implying that it is nearing its yield point and that a collapse is imminent. This means that altcoins will have a strong rally as they catch up with Bitcoin.

What is happening right now in terms of price declines is quite similar to what happened in the May 2021 crash, when most altcoins had a greater drop than Bitcoin. Altcoins ended up being down 70% or more and providing the best buying opportunities.

The market then moved in a sideways pattern with little growth. As soon as confidence returned to the market, with Bitcoin leading the pack and showing gains, the market rocketed off, as shown in the Solana chart below.

If Bitcoin maintains its current price range as support, it will be accumulating in a large range, with a reversal back to the $50k area possible. When in doubt, use the simple tool (0.618 of the Fibonacci extension) to figure out where the major take-profits zone is.

If we take the extension from $33k as the bottom, the next major take-profit zone is around $55k, and if we make a lower low and go as low as $29k, the take-profit zone is $53k. All of these are realistic because the trend is still negative, which means the next retracement will record even lower lows.

This is not the time to flee the market, but rather an opportunity to better understand how to approach it. As long as we retain the $33k range as support, a massive rally to the upside is still highly likely.

It’s time to review your portfolio, make significant adjustments, and put your money in safe hands. The generally accepted way to do this is by selling shitcoins and investing in quality projects that will weather the storm, and emerge even stronger once the market regains enough confidence, and may even lead the rebound.