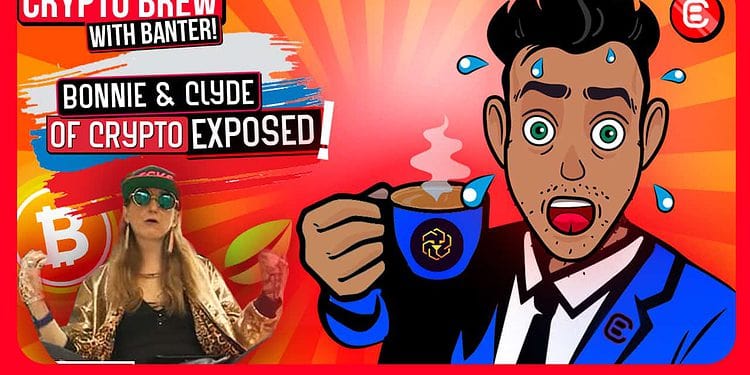 Is this the weirdest story of the year so far or what?

Are the Bitfinex hackers the real deal, or does something not stack up? As Crypto Twitter continues to speculate, we focus our attention on the implications.

Are the Bitfinex hackers the real deal, or does something not stack up? As Crypto Twitter continues to speculate, we focus our attention on the implications.

In other news, Russia makes a huge announcement – Is this geopolitical game theory in action? Plus, good news concerning a major Layer-2 could prove bullish for Ethereum. Alt season incoming?

All of that and much more…

In a story destined to become a chart-topping podcast, movie, or true-crime podcast, the alleged Bitfinex hackers have been apprehended. And they don’t exactly fit the profile we might have expected…

One of the alleged hackers is 31 year-old Heather “Razzlekhan” Morgan, whose peculiar raps and Tik-Tok segments have been spreading like wildfire across Crypto Twitter. Her husband, the other alleged culprit, is Ilya “Dutch” Lichtenstein. These alleged “masterminds” of a crime resulting in the U.S. Department of Justice’s largest financial seizure in history managed to evade the authorities for so long, only leaving a private key on a cloud-based device. It’s all just a bit… weird.

For a general overview, check out Jack Niewold’s thread!

Meanwhile, the value of Bitfinex’s utility token, LEO, shot up in the days preceding the news, suggesting that either insiders knew what was coming, or some gigabrains placed calculated bets based on the infamous stolen BTC’s recent movements. Whoever loaded up on LEO in anticipation made some pretty healthy gains.

The cryptosphere is still trying to guess what happens next, and the other parties involved probably don’t quite know what to do either. Will the BTC be returned to the victims of the hack? Will the US government HODL? What are the legal implications at play here?

We’ll see how all this unravels; this story is only just unfolding. Suffice to say, to be continued…!

Yesterday, we reported on Polygon (formerly MATIC) raising $450 million from some of the best investors in the business.

Is this raising of almost half a billion dollars bullish for MATIC? Of course, but it is potentially just as significant for Ethereum (and a possible upcoming alt season).

This is a huge story. Why? Because currencies are treated completely differently from assets. It’s a big deal, which is why we’ve got a deep-dive article coming up shortly.

Finally, with Bitcoin hovering in the $43,000 region, there still seems to be some uncertainty and fear despite the recent pump, and some analysts are suggesting there could be major upcoming resistance in the $47,000 to $48,000 range.

That said, Scott Melker points out (in line with Will Clemente’s thinking yesterday), that max pain would be an ‘up only’ scenario.

UST continues to crush it

UST has faced no shortage of FUD in recent weeks (peg-related or Anchor Protocol’s dwindling reserves), but behind the scenes, the TerraForm Labs is making strides towards global UST adoption, with the first UST debit cards courtesy of OutletFinance and Kash.io drawing closer to release.

Are we witnessing the birth of a new crypto cycle? News from Russia suggests so, and as weird as the Bitfinex story is, and however it plays out, it decimates the mainstream notion that Bitcoin and crypto is a preferred medium of exchange for illicit activity. As far as traceless transactions go, cash is king! Regulators (and law enforcement) must be digging it. Plus, these stolen funds have spooked the markets for years every time they made a move. However the Bitfinex issue pans out, it’ll be good to put it behind us! In the meantime, Bitcoin continues to hold well above $41,000, proving that this was no mere fakeout. And with equity markets heading into the week strong (in light of tomorrow’s expected Consumer Price Index data), we could see this positive price action continuing.