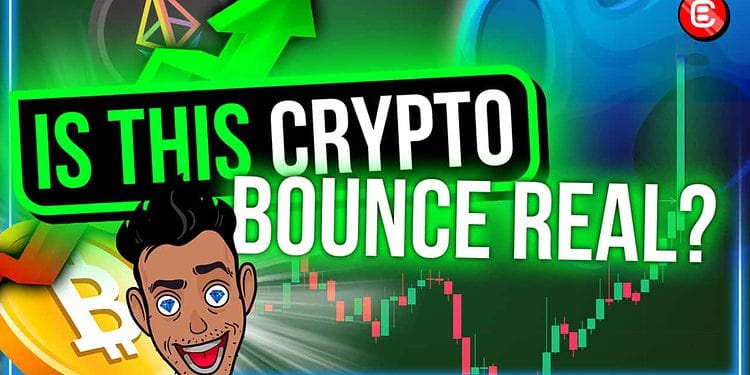 It’s the question we’re all asking: is this crypto bounce real?

After a 3-month long downtrend without a single relief rally, Bitcoin has finally made a move. And a significant one at that.

After a 3-month long downtrend without a single relief rally, Bitcoin has finally made a move. And a significant one at that.

Friday saw the kind of explosive price action we’ve been waiting for, with BTC making a convincing break of the downtrending resistance and closing the daily candle above it. Three days later, and we’re still above $42,000, making this look like something more than a mere weekend pump.

So, is this bounce real and sustainable?

Let’s take a more in-depth look to help give us a clearer picture.

First of all we need to take a look at what the charts have been doing. We know that Bitcoin defines the crypto market for the most part. And the breakout that Bitcoin had was far from insignificant. For a deep dive into all the technical analysis on Bitcoin, check out Sheldon’s Chart Of The Day.

Now that we have the TA out of the way, let’s take a look at some further indicators.

The Fear And Greed Index is one of the simplest (and best) indicators to use to establish market sentiment.

Today we see the index at 45, which on its own doesn’t seem to indicate much more than mild fear. However, when you combine it with the historical data (specifically last month’s data) we can see that we flipped from 10 all the way to where we are now. Clearly, we are witnessing a reversal in sentiment. And fast.

Sentiment is one thing, and in a recent article, we talked about the potential dangers of blindly following sentiment.

So let’s take a look at the on-chain metrics to best answer the question of what’s really going on.

Bitcoin open interest (Bitcoin futures) are on the rise, and at the same time, funding rates are turning positive.

Meanwhile, stablecoins on exchanges are being deployed. During times of great uncertainty, you would expect people to rush to stablecoins, fearing that crypto prices might be going down.

But the opposite is happening. This indicates that people are buying and are ready to be exposed to the market again.

This could be pointing to whales and long term investors taking it off in order to keep it locked away in cold storage.

We should also note that, during previous dips, whales have been spotted depositing large amounts of Bitcoin on exchanges as a scare tactic to make the market think they are getting ready to sell.

No matter the case, the fact that this amount of BTC is leaving exchanges is something to bear in mind.

The Year-over-Year (YoY) increase of people holding Bitcoin for longer than 6 months has increased by 11.2%, putting the total amount held by long term investors to 76.4%.

Funds are ramping it up

Investment funds are also increasing their Bitcoin holdings. This growth in BTC held by funds has seen mostly upwards movement over the course of the last year.

And below we can see the ETFs with the largest amount of Bitcoin.

Profitable most of the time

In this tweet by Gaah we see that, based on historical data, it is more likely for you to be profitable than not when buying Bitcoin. To be precise, 92.6% of the time that people were able to buy Bitcoin, if they had, they would now be in profit.

This may be what some rely on and HODL throughout Bull and Bear without concern.

When looking at the short term holder strength we see that, so far, things are looking good. Newer market entrants aren’t realizing their losses en-masse. But we need to keep an eye on this indicator just as much as we do with all of them.

The overall cryptocurrency market cap is increasing, whilst the Bitcoin supply is decreasing. Mike McGlone, the Senior Commodity Strategist at Bloomberg Intelligence, shares his thoughts on how BTC may be uniquely placed among all assets to see price appreciation moving forward.

Is the end in sight?

Let’s compare the data from the May 2021 crash with the one we seem to be in (and hopefully recovering from) right now. As PlanC puts it, in 2021 we first had a clear ‘capitulation’ phase, followed by a ‘failed recovery’, then we dropped some more to establish a bottom before getting confirmation of the actual reversal.

So far, this time around, we have seen the capitulation phase and the failed Recovery. Might we have also seen the bottom?

The on-chain data is bullish. But nothing exists in a vacuum. We need to consider the macro.

And it seems that investors could be willing to go risk-on again.

What’s more, there seem to be a lot of companies buying back their own stock. Amazon was one of these companies, and historically this strategy has turned out pretty well for them!

So, the TA is telling us to await confirmation.

The on-chain metrics suggest a reversal could be imminent.

And data from legacy funds suggests investor confidence is being restored.

So have we seen the worst for now? What could throw another spanner in the works and trigger movement to the downside?

One thing to watch out for is the Consumer Price Index data coming later this week.

Historically, there’s always been a reaction:

But as Alex Kruger put it, bad inflation data could trigger a sell-off, but since aggressive rate hikes have already (we believe) been priced into the markets, this could provide a great entry before a possible move back to the upside.

Right now, we are cautiously optimistic. We have seen the market bleed, with altcoins retracing as much -80% from All Time Highs. As we are hopeful that this is a strong breakout, moving into the new week, we advise that you wait to see if Bitcoin can make a higher high, and then be ready to pounce on a healthy pullback, before deploying any (or too much capital).