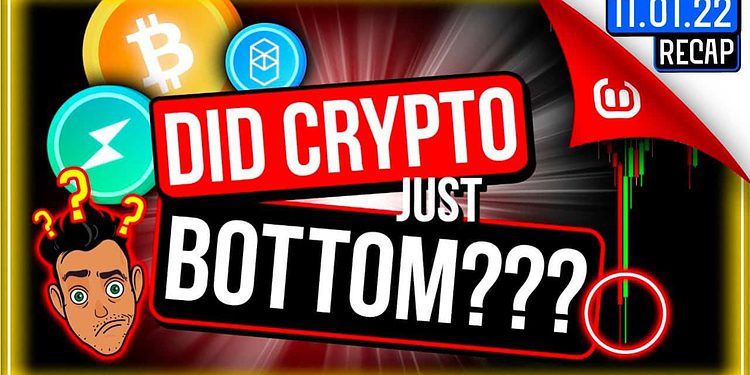 The price drops in Bitcoin and other cryptocurrencies seem to have reached a stalemate. There are several signs to support this conclusion.

The price declines in Bitcoin and other cryptocurrencies seem to have reached a standoff, but predicting the Bitcoin price bottom is a risky bet that a few would like to take. Ran believes that the bottom has been reached, and he has backed up his claim with a list of vital reasons why he is beginning to DCA.

On-chain data indicates some big buyers have started jumping in and all of what is necessary is for the technical experts to coincide, and we might be in for a market bounce.

The market might have reached its short-term lowest point

Despite the fact that market dynamics are always changing, Ran has taken a risk that a few would be prepared to take by identifying the Bitcoin price bottom.

Some of the supporting evidence for his thesis is briefly hereunder;

The fear and greed index & capitulation

For a long time, the Bitcoin fear and greed index has been in a state of extreme fear, and the last time a similar range took place was in May 2021. When these levels are exceeded, as Crypto Birb has pointed out, massive rallies ensue.

Another chart illustrates that when market sentiment is at an all-time low, Bitcoin is more likely to recover.

The last of the sellers who capitulated lost hope, and see no path back up for the market are usually driven by an extended wick down.

When leverage falls, the market usually bottoms out, as it did in May. The market rallied after leverage derivatives were removed from the market in July.

Despite the price drop, leverage derivatives are still at all-time highs, which is not necessarily a bad thing because, at this instance, liquidations were limited to one side, the longs.

The market still has a lot of leverage since there are a lot of shorts that have not been affected by the crash. The most plausible scenarios of a price pump may lead to a cascade of short liquidations, pushing the price further higher.

The market sell-off has resulted in a downward Bitcoin dominance breakout, implying that Bitcoin is about to embark on a solo run.

When this happens, the market gains confidence from the Bitcoin rally, and major altcoins prosper before profits flow into smaller altcoins.

However, other altcoins are gaining traction as market confidence returns, Bitcoin’s dominance is unlikely to surge as it did once before.

Bitcoin dominance is now at 40%, with the possibility of a lower high (relative to the previous high) of around 46%, which would be enough to reassure the market as whales exhibit more conviction.

Breakouts have typically occurred when there has been a divergence between Bitcoin and yields combined with positive on-chain conditions.

A new divergence is building between Bitcoin and the 10-Year Treasury Yield, indicating that investors are abandoning their government bonds in favor of riskier assets (like Bitcoin).

The Federal Reserve’s attempt to prevent inflation by raising interest rates led to a drop in global market prices, including the crypto market. After the first two trading weeks of the year, the US Tech 100 is down approximately 7%.

As he prepares to be re-confirmed as the chairman of the Federal Reserve, Jerome Powell will testify before Congress about how he wants to keep inflation under control.

The monthly CPI report will be announced tomorrow, and Ran expects it to be lower than the previous month. It will be good for the market since people will realize the situation is not as bad as they believed.

The increase in Bitfinex reserves has slowed, implying that Whales have ceased sending BTC to exchanges according to on-chain measures.

Many individuals are looking forward to seeing how successful Fantom (FTM) can be this year. Despite the uncertainty that has surrounded the crypto market this month, the coin is in profits so far and has not disappointed.

This week, the Layer-1 blockchain TVL grew by 26.49 percent, while all other chains faced large declines.

Ran was joined in a show by Harry Yeh, the founder of Fantom, who discussed the Fantom ecosystem.

The conversation about tomb finance received a lot of attention. The project is one of Fantom’s most successful ones, and it intends to add liquidity to the Fantom ecosystem as well as new use cases to the Opera network.

The three tokens that make up the multi-token protocol are as follows:

TOMB is Fantom Opera’s first algorithmic stable coin which is linked to the price of 1 FTM by seigniorage. Because the Fantom network requires staked tokens to be secured, a large amount of Fantom tokens (FTM) is effectively removed from circulation.

Fantom tokens are staked for a certain amount of time and cannot be unstacked at any time like other networks, which is a wise move because it prevents investors from selling Fantom.

Tomb Finance designed a mirrored and liquid asset that may be used in place of FTM. While the number of FTM available for staking remains the same, an alternative to FTM will create other use cases within the ecosystem, such as participating in FTMpad – a launchpad on Fantom.

TBONDs are issued when TOMB’s TWAP (Time Weighted Average Price) falls below 1 FTM, and they can be purchased with TOMB at the current price. TOMB tokens are burned when they are exchanged for TBOND which helps to bring the price back up to 1 FTM.

TSHARE holders have governance (voting) rights on ideas to improve the protocol and future use cases in the Tomb finance ecosystem. After each epoch expansion, TSHARE stakeholders will earn TOMB.

TSHARES and TBONDS were practically worthless before Harry Yeh joined TOMB financing in September 2021 as a result of an exploit.

After the exploitation, Harry rebuilt the protocol from the ashes because he recognized the potential in the project and thought it would be successful in the right hands.

LIFE is a fork of OLYMPUS OHM that will be used to incentivize users and provide additional utility for $TOMB, as well as allowing the LIFE DAO to own its own liquidity and build out its treasury.

Fante is a utility token that will function similarly to BNB on Binance, but for the Felix exchange, which is set to launch soon.

The cryptocurrency market is creating millionaires at a faster rate than any other industry on the planet. It is proving that there is no better place to be rather than the crypto market because it offers a once-in-a-lifetime chance.

Seven crypto entrepreneurs and billionaires have been named to Forbes’ list of the wealthiest Americans for 2021. Thanks to the growing popularity of cryptocurrencies in mainstream culture.

The most recent addition is Changpeng Zhao, the CEO of Binance and the most popular crypto exchange launched 5 years ago with an estimated net worth of $96 billion placing him among the world’s top 15 wealthiest people.

His valuation now exceeds that of Asia’s richest man, Mukesh Ambani, and rivals that of computer heavyweights Mark Zuckerberg, Larry Page, and Sergey Brin of Google.

Billionaires from Tishe industries are now joining the party in a sector famed for its staggering fortune. Bill Miller, a billionaire said in a video interview with Wealth Track broadcast on Friday that he is so positive on bitcoin that it along with bitcoin-related investments would now account for half of his portfolio.

Miller rose to prominence as a fund manager at Legg Mason where he topped the S&P 500 index for a record-breaking 15 years in a row from 1991 to 2005.

The market may have reached its short-term lowest price limit according to a convergence of metrics and fundamentals. It is a time to put your money in safe hands and prepare your portfolio for the next leg of the bull market. Sell shitcoins and invest in quality projects that will weather the storm and be around for a huge trend reversal.