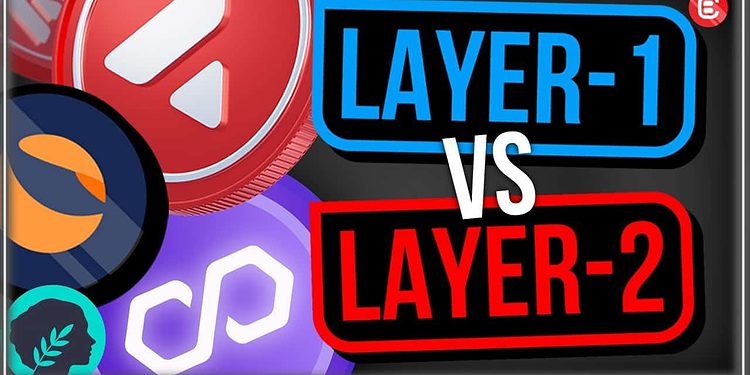 Could it be that Layer-2 (L2) blockchains are superior to alternative low-fee Layer-1s (L1s)?

Could it be that Layer-2 (L2) blockchains are superior to alternative low-fee Layer-1s (L1s)? At first glance, Solana is the obvious choice over Ethereum, simply because Solana is way faster, and Ethereum fees have been absurdly high for a long time now. Maybe you even have your eyes on Avalanche and Fantom?

There’s more under the surface, and looks can be deceiving.

With a Total Value Locked (TVL) in all L2s collectively adding up to $5.38B, let’s take a look at why – and which – L2 Ethereum solutions could be a better choice than Alternative L1 chains.

This article was inspired by this thread by pseudotheos.

Differences between Layer-1s and Layer-2s explained

Bitcoin (BTC), the current most popular L1, was the first iteration of a blockchain. It had one pure cause: to be a currency of and for the people, without the need for intermediaries. A fully peer-to-peer payment network.

But blockchains go beyond currency.

Ethereum took blockchain technology one step further by utilizing smart contracts. Smart contracts are nothing more than pieces of code that live on-chain. You execute this code using the parent chain’s currency to pay for operating fees, known as gas. For example with smart contracts on Ethereum, you pay for the gas using ETH.

Today, however, the price of gas on the Ethereum network has rendered the network unusable for the average person (not too dissimilar from its petroleum-based namesake). As a result of its network effect, the chain is heavily congested and slower than ever. Ethereum’s success – its high user and developer base – is also its Achilles heel.

So what can we do about this?

Well, the main purpose of a blockchain is to securely store immutable data of a ledger of transactions. You need to calculate the transactions (execution) and then store them (consensus). Doing both can be daunting for any chain, but you can effectively decouple the execution and the consensus layers to get the best of both worlds.

This is what a L2 blockchain does.

A L1 blockchain only needs to publish the secure data. The L2 does all the calculations, compresses the calculation data (like a zip file), and then sends it to the L1 for publishing. This can all be achieved via various methods, like zero-knowledge (ZK) proofs and optimistic rollups. Using these methods correctly would allow Ethereum to scale beyond anyone’s wildest dreams, while maintaining low gas costs.

So, could L2s be the biggest narrative of them all? Always look one step ahead. Maybe think more like Tascha, and try to spot the next narrative.

Exposure to L2s and airdrops

Bear in mind, you can’t invest directly in every L2 out there right now, because they haven’t yet launched a native token. However, there are steps you can take to gain exposure to them, in anticipation of potential airdrops.

Usually, you need to fulfill some prerequisites, such as a total value of tokens transferred or a total number of transactions made with your wallet,  in order to be eligible for an airdrop. So linking up your wallet to some L2s and making a few small transactions might be a good idea.

To see potential upcoming airdrops and what the requirements were for past ones, check out the ICO Drops website here.

Now, let’s take a closer look at someL2s (there’s a link to a full list of L2s in the Banter wisdom below).

The congested Ethereum network was the reason Polygon was born. It was created as a L2 solution for Ethereum, to help make it faster and cheaper and is the go-to L2 for Ethereum right now.

To use any L2 you need to bridge your tokens across from the corresponding L1. To achieve this with Polygon, you lock up your existing ETH on Ethereum into a smart contract. In turn, you then get the equivalent ETH on the Polygon network in the form of Wrapped ETH (WETH). You can then go about making transactions on Polygon and trading on Polygon native exchanges, like QuickSwap, and when you are ready to move back to the L1 you simply use the bridge in reverse.

Sandeep Nailwal, co-founder of Polygon, has saidt Polygon believes there will multiple L2s supporting Ethereum in the future. At the same time he sees a future where the L2s have their own L2s – aka L3s.

Keep in mind that Ethereum is where smart contracts were born, and where all the developers flocked to initially. They are not going to leave projects they have built on Ethereum at the first mention of an alternative L1 – they are more likely to prefer a L2 solution. So it’s no wonder the development activity on Polygon is increasing so much.

StarkNet, built by StarkWare Ltd, is a ZK-rollup that functions as an Ethereum L2 utilizing STARK cryptography. It has universal utility and reportedly allows for unlimited scalability of any dApp building on its layer.

It seems to be gaining adoption fast, and people are asking the team about their tokens constantly. So much that Louis Guthmann, the Ecosystem Lead at StarkWare, tweeted this just a few days ago:

dYdX (DYDX) is a decentralized crypto exchange built on the Ethereum network using StarkWare, and it seeks to be one of the best L2 exchanges on the market.

Its native token launched in September 2021 and rose all the way to $28 before retracing to $5.05, where it currently sits. The price has been consolidating for over two months now at these low levels, so it may have bottomed.

Optimism is built as an Optimistic Rollup, and is EVM compatible.

Arbitrum works in a way where, some say, it’s indiscernible from using Ethereum’s L1, other than the fact that you are not paying high transaction fees.

All you need to do is go to the Arbitrum bridge and move the funds from L1 to L2.

All the big dApps that you can use on Ethereum’s mainnet probably end up moving across to function on Arbitrum’s L2. You can check out the list of dApps that have already moved across on their official portal here.

There is a lot of speculation around a governance token airdrop, but nothing official yet. Check out the ICO Drops page for potential future info here.

These fees are paid to the Ethereum network because that is where the base smart contract lays for you to bridge the tokens across. Hence, the fees might be high initially, but after that you are free to transfer between wallets on the L2, and trade token with near-zero fees. ZKSpace also claims it can achieve over 10k transactions per second.

Speed and low fees are definitely at play here. And a very low market cap. Makes you think what could happen if it takes off.

Loopring is another ZK-rollup solution acting as a L2 for Ethereum. Its main goal is to offer the same security that its parent L1 offers, while providing speeds up to 1000 times faster and fees that only cost 0.1% of the ETH equivalent.

Another ZK-rollup utilizing protocol, that focuses on putting security and user experience first. It is already live on the Ethereum mainnet and you can, just like with ZKSwap, bridge your tokens across to its L2.

It can reportedly achieve over 2k transactions per second.

And it might have an upcoming airdrop on the horizon as pointed out by many on Crypto Twitter. Be on the lookout for a potential token release or airdrop here.

Just as there is room for multiple L1s to thrive, there is also room for multiple L2s. There will likely not be one to rule them all, and as time goes by, there will surely be a need for more and more, even after ETH 2.0 comes into effect. While everyone has been focusing on L1s, it seems the wider narrative of L2s has been baking in the background. If you believe in this narrative, you are super early.

As always, though, DYOR – to help you, information on other L2s is available at the L2Beat website here.