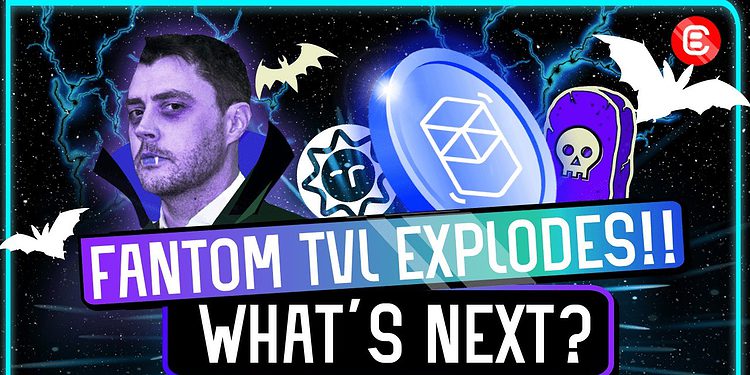 Fantom’s TVL is exploding, but there is much more to this liquidity success story!

Fantom has overtaken BNB to become the third ranked chain for total value locked (TVL). This insane growth is largely due to the upcoming SolidSwap ve(3,3) airdrop, with multiple projects fighting for TVL in order to qualify.

Fantom has overtaken BNB to become the third ranked chain for total value locked (TVL). This insane growth is largely due to the upcoming SolidSwap ve(3,3) airdrop, with multiple projects fighting for TVL in order to qualify.

Fantom has just overtaken Binance (BNB), Solana (SOL) and Avalanche (AVAX) to claim the third ranking by TVL. This marks a +185% TVL growth over the last 30 days, despite all other major chains declining over this same time period. This growth is a testament to the strength and loyalty of the Fantom community, who have banded together to cement Fantom as a top tier Layer-1.

The beginning of the liquidity wars

It all started on 10 January, when Andre Cronje announced his new project – dubbed “SolidSwap” – in collaboration with Daniele Sestagalli aka Daniele Sesta . It’s an automated market maker (AMM) designed to incentivise fees over liquidity. Its ve(3,3) mechanics mean that it incentivises a higher annual percentage yield (APY) the longer you lock up your tokens, with the game theory mechanics of Olympus Dao encouraging more users to stake.

But here’s the caveat: These tokens are only going to be distributed to the top 20 protocols on FTM by TVL, which will then decide how to distribute these tokens to the people. On 10 January, Andre also announced that on 23 January, the snapshot would be taken via DefiLlama. This kicked off a liquidity war amongst the projects on Fantom, all vying for a top 20 spot to guarantee their distribution. And that’s where the fun began.

We saw a flood of liquidity pour into the FTM ecosystem following Andre’s announcement, marking a 124% increase in TVL since SolidSwap was first announced. People were – and still are – pouring liquidity into the ecosystem in the hopes of receiving rewards through holding the top 20 protocol’s governance tokens.

Due to this TVL war, we saw projects like veDAO pop up with the sole purpose of sucking liquidity. It was purpose-built to capture liquidity by offering extremely attractive returns to users via the emission of its $WEVE token.

Many people in the Fantom community didn’t like this. Of the total token supply, 15% was due to be allocated to the DAO and team, rather than to the community. In response, the top developers from major Fantom projects like SpookySwap, Scream, Revenant and Liquid Driver banded together to assemble somewhat of a ‘Fantom Avengers’, launching a vampire attack via a new project titled ‘0xDAO’. Harry Yeh also voiced his support for the new project:

0xDAO’s Medium article stated that veDAO’s “greedy, short-term value propositions are dangerous to the growth of our network, and [we] would like to present a community-centred alternative with a coalition of proven developers and achievable long term goals”. In order to achieve this, 0xDAO is rewarding 100% of its token supply back to users directly.

The launch of 0xDAO was a resounding success, sucking over $2 billion worth of liquidity from veDAO, as users flocked to 0xDAO due to its superior rates and trustworthiness.

On 23 January, the snapshot was taken. At the time, multiple fan favourite projects like Liquid Driver, Tomb Finance and Tarot Finance seemed to be excluded as per Andre’s tweet.

This caused some concerns among the Fantom community, as many contended that the snapshot seemingly favoured short-term TVL incentives, rather than rewarding long-standing FTM projects. We are still waiting on clarification from Andre, and we could very well see these projects qualify for distribution over the coming days.

Nonetheless, this whole TVL wars situation has emphasized the power of the Fantom community, exemplified by its +185% TVL growth over the past month. Although we could see some liquidity leave the ecosystem post-distribution, ve(3,3) is still extremely bullish for Fantom as a whole.

It has exposed thousands of new users to the Fantom ecosystem and shone a light on both the development happening on the Fantom chain as well as the strength and passion of the community. I’m extremely excited to see how SolidSwap continues to impact Fantom, as well as the implications that the new ve(3,3) model could have on crypto as a whole.

Despite recent market volatility, the recent TVL growth on Fantom has highlighted that strong fundamentals and developers can still attract mass liquidity and users, despite a broader crypto correction. If proven successful, the ve(3,3) model could revolutionise AMM tokenomics and be replicated across other chains. Either way, Fantom has the first mover advantage on a completely new token economics design.

Miles Deutscher is a degen with immense experience in finding altcoin gems, and navigating the world of DeFi for the best strategies and biggest returns in the crypto space. Want more from Miles? Check out his Twitter feed here and his YouTube channel here.