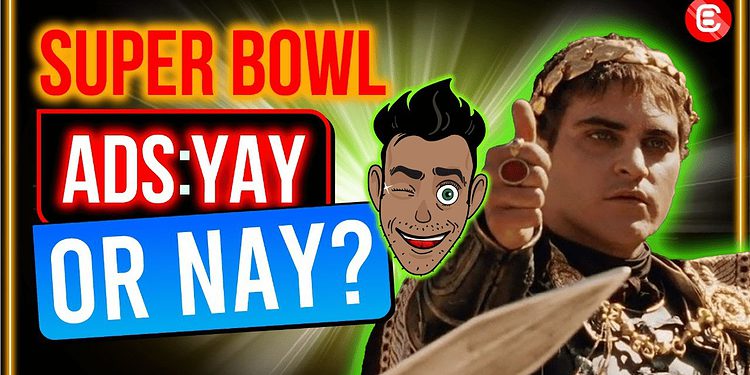 With an estimated audience of over 117 million viewers, the 2022 Super Bowl, also known as Super Bowl LVI (56), saw crypto companies flocking en masse to gain exposure to as many retail investors as possible.

With an estimated audience of over 117 million viewers, the 2022 Super Bowl, also known as Super Bowl LVI (56), saw crypto companies flocking en masse to gain exposure to as many retail investors as possible. Advertising during the Super Bowl does not come cheap, with a 30-second slot setting you back $6.5 – 7 million.

This was one of the single biggest marketing campaigns the crypto industry has ever seen. And Ran wanted to give his expert opinion!

Not only is he an authority on crypto, but before becoming a full-blown, full-time degen, Ran built the biggest and most successful marketing agency in South Africa. With his knowledge and background, Ran has brought his keen eye to the Super Bowl LVI crypto commercials.

It’s time for the good, the bad and the ugly.

The Coinbase ad saw a simple QR code hovering around the screen. Coinbase announced they would be giving away $15 worth of Bitcoin to anyone who signed up before February 15th. This led to many people scanning the QR code (to such an extent that Coinbase’s website crashed!)

The ad seemed to divide opinion, but the website crash caught everyone’s attention. No such thing as bad publicity?

An incredibly bold, simple, and intriguing premise that invited viewers to engage (by scanning) simply to figure out what on earth was going on. In short, exactly the kind of gutsy advertising we should be seeing more of.

Plus, the way the Coinbase website itself crashed was almost too good to be true – was it manufactured? Possibly. Again, this only drives speculation, engagement, and a sense of insatiable demand. Happy accident or carefully calculated ploy?

The eToro ad places a man walking through the city streets whilst asking friends (via text messages) what the best place to trade crypto and stocks is. Referencing community, combined with the potential to make life-changing earnings, the man joins other people floating in the sky after a woman approaches him and asks “To the moon?”, grabbing his hand and taking him to the floating crowd.

There were at least two Easter eggs in the ad, a Bored Ape Yacht Club (BAYC) NFT sitting in a store window, as well as a Shiba Inu dog.

A cool song, but a boring, functional and linear commercial. In the face of stiff competition, this one came off as bland, safe and totally underwhelming.

The FTX ad takes us through a history of disruptive technologies, with Larry David in the starring role.

Even though most people spoke good words about the ad, there were some criticizing comments about it flying around Crypto Twitter.

Ran gave this one a big thumbs-up. It drove the message home loud and clear, namely that if you are not getting into crypto now, then you’re missing out on one of the biggest innovations mankind has ever seen. Yes, it was on the nose, and perhaps a bit too literal, but it was fun, amusing and direct.

The Meta Quest ad showed off Meta’s new VR headset, and tried to grab the viewers’ attention through a dramatic story (with a happy ending), which saw old friends coming together for a reunion in a virtual world.

Ran loved the sense of story, character and that swell of oxytocin which all good narrative-driven adverts should strive for. In that way, they nailed it.

But, was it enough?

It seems they may have lost points by hinting at the fact that you would need to put on a VR headset and jump into a virtual world in order to reignite old friendships. Fortunately, the real world is more exciting than that.

A relatively simple ad for TurboTax and its online tax services.

Functional and fast moving, which is kind of what you’d want from your accounting software, but not necessarily from a commercial.

It was not even really a crypto ad (it was only mentioned in passing), and it suffered from having no clear messaging (or anything remotely unique or original about it).

The Bitbuy ad shows an executive pitching their new marketing campaign to Kyle Lowry in a humorous and self-aware manner.

The message was loud and clear, and driven home thanks to a strong concept. It was also well pitched: fun yet functional.

Overall, it was a good ad which played on the fear of missing out (FOMO) through the metaphor of Kyle Lowry missing shots.

The crypto.com ad stars a time-traveling LeBron James giving his younger self a pep talk.

Not a bad effort from Crypto.com: a popular leading man, strong (if not unoriginal) concept, and solid execution.

However, be warned: the last crypto.com ad was a top signal for the market.

Nothing to write home about. The emotion created by the idea of going back and chatting with your past self was palpable. The use of LeBron James was a real coup, but the concept has already been seen before.

This was a big moment for the space as a whole, as major companies sought to maximize their “Airtime to New Customer Conversion”. It could spell the beginning of a new trend: major marketing campaigns from the leading crypto companies have crossed the threshold and now belong firmly in the mainstream.

All in all, you should have peace of mind knowing that you were in the know before these kinds of commercials hit the mainstream airwaves!