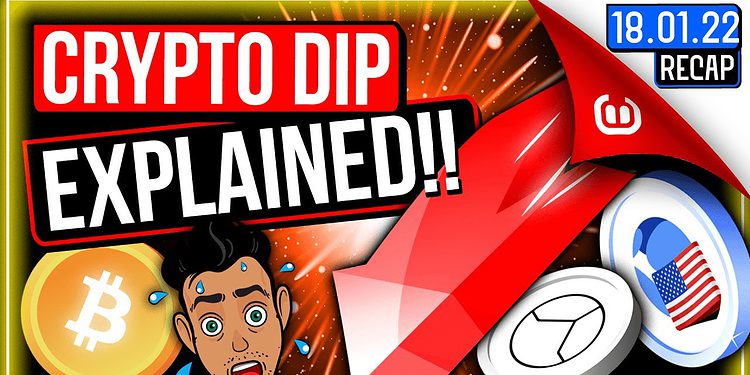 The market is taking a dip again and if we’re right about what’s causing it, there might be massive opportunities that no one else is seeing. On the show today, Ran let us in on the opportunities hidden in the market dip and how to leverage it for massive profit.

Is the Cardano season already playing out?

Ran said yesterday that the Cardano season is upon us, and of course, yesterday, Cardano ecosystem coins exploded right after he made the call. GeroWallet was up 90%, Paribus went up to 30% and Cardstarter went up by 26%. If you believe there’s going to be a Cardano season, you should position yourself in the launchpads because that’s where you’re going to get the cheapest entries.

At the same time, some of the old plays like Fantom are still holding pretty well. More importantly, the TOMB/FTM peg is still holding at 1:1. So, for those of you who are staking your FTM, you are getting a 100% return on staking it in Tomb with very low impermanent loss. Also, If you are staking your T-shares, you should be getting about 266% APR. For those of you who are putting them into an auto-compounder, you should be getting 1330% even in the down market.

Why is the price of Bitcoin plummeting?

There’s been a lot of hot takes on Twitter about the negative market cycle. Bringing Birb on to the show, he spoke about the market narrative. He thinks we have a very indecisive market condition right now, which isn’t very typical of Bitcoin. He also shared his strategies for trading ranges. First is inside range trading, which means buying the low of the range and selling the high of it until you’re proven wrong. Second is outside range trading. Here, you wait for the break hold in a specific direction, and position yourself in the right direction. Strategy number three is to not trade a range at all.

What exactly is this ten-year treasury yield, why is it so important to Bitcoin and why is the market diverging? Also, what opportunity is in this for you degens? The ten-year treasury yield is the yield on lending the government money for ten years. So, if the government sells you a bond at US$900,000, with the promise to pay you US$1 million after ten years with a yield rate of 1% per year. Based on the chart, if you buy one of these right now, you’ll make 1.8%, but if you had bought it earlier, you would have made 1.15%. This means that the higher the bond rate, the cheaper the bonds are. This is because people don’t want the bonds and so they’re selling them. And to entice people to buy the bonds, the government is offering a higher rate. So, instead of buying a bond for US$900,000, you buy it for US$800,000. Not exactly high yields, especially compared to crypto, but safe and conservative bets.

Right now, people are selling government bonds and the US treasury is going up. And typically, when money flows out of bonds, it flows into more stable stock market picks that pay dividends. And what’s going on in the market? The market is pricing Bitcoin as a risky investment instead of a yield-bearing store of value. So, contrary to what people might think, Bitcoin isn’t dropping because of inflation but because investors aren’t putting money into growth assets, instead choosing dividend-paying stable assets.

Who are these investors anyway? They are typically the institution pension funds that are looking for yield because they have to deliver yields to cover their obligation.

If these theories are correct, then we could get an explosion of Bitcoin to close the divergence. One opportunity here is to buy Bitcoin, and hopefully, it’ll go back to its correlation. The thing is though, everybody is probably thinking along this line right now. But Ran thinks there’s an even better opportunity lurking somewhere in the market.

What new tricks can you use to make more money in the down market?

This might be a clue to something that is about to happen. In previous posts, we talked about how institutions may be coming into Decentralised Finance (DeFi). Because the one place where they haven’t come yet in their search for yields is DeFi. Ran thinks this narrative might actually be playing out right in front of our faces. Because either these institutions keep earning 0,01% and 1% from lending money to the government or they can come into DeFi to get amazing returns. Which choice do you think these yield-hungry institutions are going to make?

Ran thinks there’s another quiet opportunity that most people don’t know about; stablecoins. There are three types of stablecoins: dollar-backed stablecoins, collateralized stablecoin, and algorithmic stablecoins.

Here’s what these institutions are going to do when they get into crypto: they will go into USDC and USDT. And they’ll get about 9% or 14% yield. And then they’re going to find out about non-dollar backed stablecoins. They’ll then become clever and realize that they should be buying and staking UST. They’ll find out that they could be earning 20% on Anchor protocol. And what do you think they’re going to do next? Yes, they’ll decide to put some of their money in.

Because we know what cycle they’re going to go through, we can get a one-up on them. So, what we’re going to do is to buy the protocols that make money while they use that money. They’re coming to use TERRA? We’ll buy LUNA. Their search for yield is going to mean an increase in our stablecoin provider holdings.

If you’ve decided to take advantage of the stablecoin narrative, Ran might have just discovered a gem that no one is talking about. Of course, buying LUNA is a good idea, but LUNA is now a mature coin. There’s a new promising alternative in the market now called Vader. Vader is a protocol with a decentralized exchange; it has a collateral stablecoin called USDV, which works just like LUNA. So, you might want to consider this cheap new option.

In the same vein, there’s another new type of stablecoin on the block launching today. Recall the three types of stablecoins we spoke about earlier? Well, there’s now a new concept in stablecoins that nobody is talking about. We think that’s because they don’t really understand how it works. But we are going to let you in on that.  UXD is a collateralized stablecoin that is completely decentralized. The innovation is in how they create their stability. UXD is a price stablecoin because it is backed by delta-neutral positions.

Despite the speculations around the Bitcoin price dip, this is the time to take advantage of the opportunities the dip brings. Buy the dip or make your money from the rate increase on bonds,

Also, if you believe in the institutional adoption narrative, buy LUNA now. Or maybe go for the cheaper and newer alternative; Vader, You might also want to look into the UXD protocol which honestly, isn’t getting enough attention, but we think is an excellent investment.