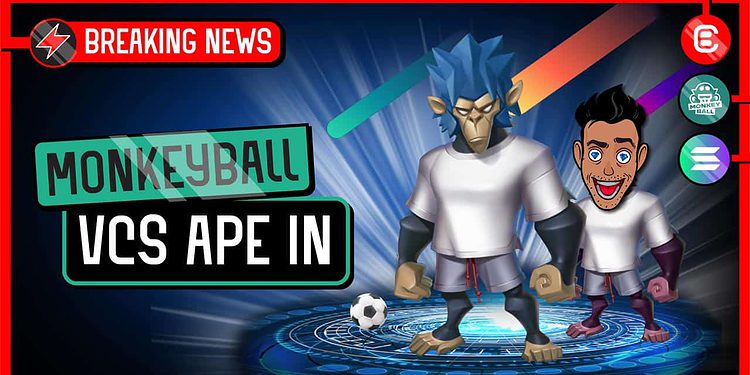 MonkeyBall, a new play-to-earn (P2E) arcade soccer and non-fungible token (NFT) game, has secured a whopping $3 million in a funding round consisting of prominent angel investors and venture capitalists, according to a recent press release.

MonkeyBall runs on the Solana blockchain, one of the fastest-growing blockchain networks in the space today. The game features a P2E model that rewards players with tokens for winning against others, hosting games, purchasing stadiums, and supporting victorious teams in games.

MonkeyBall is a turn-based, play-to-earn, AAA-grade arcade soccer game described as the convergence of “FIFA Street” and “Final Fantasy”. Players earn MonkeyBucks (MBS) tokens whenever they win or attend other games.

The game is developed on the Unity game engine and designed for both desktop and mobile platforms. According to COTI CEO Shahaf Bar-Geffen, one of the angel investors, the launch of the game is planned around Christmas.

CryptoRank.io, a blockchain analytics firm, said that MonkeyBall is one of the major token offerings to watch. MonkeyBall’s IDO price is set at $0.04 with a current market cap of $1.67 million.

Why are VCs going apesh*t over MonkeyBall?

Oren Langberg, head of marketing at MonkeyBall, pointed out that the blue-chip investors were attracted by the superior production quality that MonkeyBall boasts in a jungle of generic P2E games. Langberg also emphasized that the first “truly mainstream” P2E game has yet to come, but his team is working very hard to make this the future of MonkeyBall.

One of MonkeyBall’s angel investors includes DraftKings, a daily fantasy and sports-betting firm. Its largest shareholder, Shalom Meckenzie, said that “play-to-earn games are a revolution in how gamers interface with the virtual world”. Despite the growth of gaming and NFTs, what’s missing is a game that can stand among other AAA titles and Meckenzie feels the Monkey Ball team has what it takes to get there.

MonkeyBall has also been recently chosen as the first project to launch an initial DEX offering (IDO) on StarLaunch, the first insured launchpad on the Solana network. While no hard dates have been set, the team is expecting a high turnout for registrations.

According to the StarLaunch team, MonkeyBall is one of the few games that could spearhead the revolution on play-to-earn NFTs. StarLaunch features an in-house insurance program for their IDO participants, including a comprehensive project vetting process to ensure the quality of the projects they are launching.

Solana has made insane gains this year thanks to its speed and cost-effectiveness, flippening the likes of Cardano. It is now attracting the brightest and best to its booming ecosystem, as was evident at its recent Breakpoint conference.

Getting AAA games like MonkeyBall to launch on Solana launchpads such as StarLaunch (which itself went 90x at IDO) is a strong bullish indicator that Solana is not monkeying around and will continue its ecosystem explosiong.

DYOR on the SOL gaming industry and try to snap up promising games early. If you can’t get into IDO sales, go and support them on social media and assist in the community.