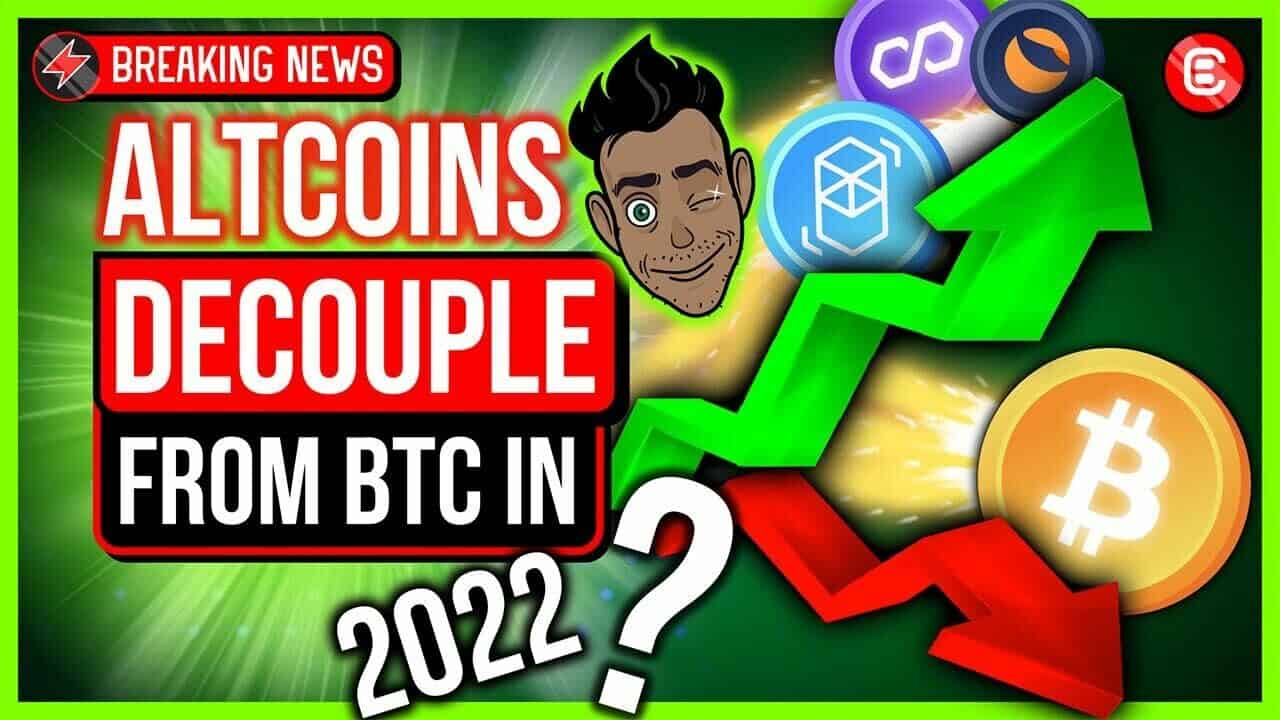 New data shows us what Altcoins will do in 2022

Cryptocurrencies are finally getting to a point where grandpa Bitcoin won't be able to illustrate the future of crypto markets on metrics such as blockchain usability. No chance that will happen!

Cryptocurrencies are finally getting to a point where grandpa Bitcoin won’t be able to illustrate the future of crypto markets on metrics such as blockchain usability. No chance that will happen!

As discussed on the Crypto Banter show, new money will flow into Bitcoin because it’s a safer bet. Similarly, Willy Woo acknowledged that companies with BTC exposure are increasing their market share meaning they don’t care if Bitcoin is old, as long as they can profit from it. And that’s bullish for crypto as a whole.

Bitcoin’s lack of momentum is not embraced by the whole of the market! The granddaddy of crypto turned into a slower entity, losing much of its market dominance. Bitcoin’s market dominance has dipped below 40% for the first time since 2018. Plan A predicted Bitcoin would possibly need a crane to stand on as its dominance might dip below 10% as investors continue to shift their capital towards protocols that have a better short term prospect. It’s hard for Bitcoin to stand a chance against other protocols when its own purpose – p2p transfer – is not being used.

As a result, new protocols like Avalanche, Polygon, Luna, and even Fantom, are capitalizing on the market – but we’ll dive into that in the second section of the article. Ryan Selkis, founder of Messari, shares this view indicating smart “crypto mercenaries” pursue protocols that spike the interests of investors, but we call them degens! And who can blame them. We’d rather use a protocol that can meet all our digital needs, from finance to art or value transfer.

Why did it hit an all-time high? Or the expression investors have when projects like LUNA or AVAX hit an all-time high. We are reaching a point where Layer-1 protocols are casting a shadow on Bitcoin’s lack of movement, decoupling for its stagnant state, and development and new applications, which onboards new users.

Remember that in mid-2021, Solana went parabolic. It went from $23 to $179 in two weeks as developers migrated to a better alternative to Ethereum, sparked by a Solana NFT boom. The same is happening with other Layer-1s, such as AVAX, LUNA or Layer-2s like Polygon. As developers migrate to new protocols, they bring along VCs to help build out new decentralized applications, and users add value by locking up assets on the protocols.

Gen 3 blockchains are sparking the imagination for institutional investors for a new blockchain-powered internet, which can only be applied through a scalable blockchain solution. Well hello Layer-1 and Layer-2 protocols!

Nischal Shetty, CEO of Crowdfire, identified that building better scalable blockchains leads to increased adoption across the board. This is mirrored in the leading number of developers building on Cardano while the network prepares for a possible new “season” as soon as the first dApp is live on the network.

As Ran discussed in the Crypto Banter show, decoupling goes through a series of stages that can be pinpointed on third-party apps or data sets. He stated increased developer activity brings in more VCs, which help build dApps, increase the TVL and ultimately positively impact the price.

While the allegory of events is accurate, there are deviations from the mean. For example, DefiLlama data shows that only 14 protocols are running on LUNA compared to 108 on Fantom, yet the price difference is striking.

LUNA is the perfect example of how fundamental changes to a protocol can incite a parabolic rally, kicking off an Layer-1 trend in a sideways moving market while UST claimed its rightful position amongst its fellow stablecoins. The mint-and-burn tokenomics sent it higher than anyone imagined! LUNA has reached a TVL of US$19.94 billion and still has some way to go. With only US$6.69 billion in TVL, FTM can be the next Layer-1 cycle if it follows LUNA’s footsteps. FTM is bound to enter a new cycle as the protocol hits a record
1.5 million active addresses, and that could be just the start!

Basically, watch the hype cycle. Price history-wise, every project had a catalyzing hype cycle, which helped the price of the tokens reach all-time highs. January 2022 could very well be Fantom month. It follows a hype-generating trajectory that started with Andre Cronje hinting at a new project with Daniele Sestagalli from Frog Nation, throwing around sexy words like DeFi 6.9 or NFTs and staying away from the tainted BTC!

The steps to a successful project cannot be concluded unless there is a catalyzing agent. If all the telltale signs are there, a good investor will be able to spot them. Look at Fantom and you’ll see that a DEX brings usability to a protocol, which increases the TVL and the rest is, well, already known. We don’t want to call it protocol histeria, but users flock to a protocol and it becomes usable. Speculative bets are risky, and none of them yield the same results as real utility does. A good investor can spot a hype-cycle’s tells from a mile away once utility becomes known.

Cardano is on its way towards a parabolic price implosion. In 2021, Cardano had the most developer activity out of all the protocols; Charles Hoskinson is a DEGEN thought leader who can ignite the price flame once everything falls into place. The only beat that’s missing is a DEX where users can interact with the platform and make the native token more valuable through DeFi use-cases.

So if the project you’re following ticks all the boxes, just sit and enjoy the ride! It could possibly even be Cardano as the next Layer-1 narrative – it’s been brewing for a while.