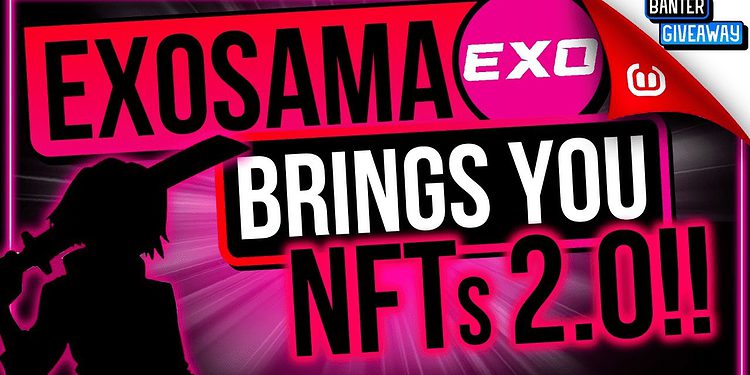 NFT 2.0 is here and this could be your chance to win one!

NFTs are driving adoption, and digital upgradability is the next frontier in the NFT space. The much anticipated Exosama NFT collection is raising the bar, elevating the idea of what these next-generation, customizable NFTs can do. And the hype is spreading like wildfire!

NFTs are driving adoption, and digital upgradability is the next frontier in the NFT space. The much anticipated Exosama NFT collection is raising the bar, elevating the idea of what these next-generation, customizable NFTs can do. And the hype is spreading like wildfire!

NFT hype is reaching the point of saturation, and that’s because the most popular NFTs don’t provide use cases beyond digital flexing and passive income. However, the industry is now changing, but the next evolution is not happening on Ethereum, but rather in the Polkadot ecosystem, which is where Exosama will be built.

Demand for blockchain interoperability is rising. The NFT sector is seeing a similar evolution in generating unexplored digital products. As discussed in our recent NFT 2.0 article, NFTs must be inter-likable and dynamic. It thus deems the network as useful in creating new use cases by stimulating a newly developing industry (where NFTs become central to the development of digital interaction).

Where does Exosama fit in?

Exosama is like nothing we’ve seen in the NFT space yet. Why? Because Exosama represents the idea of the first upgradable NFT project.

At its core, Exosama is a cyberpunk NFT meta-RPG game built on the Polkadot network. Exosama is a project that allows owners to equip and upgrade their NFT with additional assets (which are also NFT based). And that’s where the NFT idea starts to get really interesting.

In their current state, NFTs are non-customizable. Exosama seeks to change the game by integrating the notion of customizable NFTs, where users can create unlimited iterations of their NFT through updates.

While that might not seem like a big deal, NFTs, much like blockchain, behave like agnostic data silos. They cannot be altered once deployed. Exosama is the exception to the rule. The project is built on the RMRK.app (pronounced remark) on the Kusama network, which allows NFTs to develop into actionable digital assets.

The project was started by Donnie the Builder, who also developed the first Polkadot Minecraft metaverse, Moonsama, which introduced the notion of NFT usability to parachains. Donnie has proven to be a resourceful builder with a track record of creating projects that chime with the NFT community. Exosama has the potential to be huge.

Exosama is generating interest in the NFT community not just thanks to Donnie, but also because Exosama is the first NFT project that proposes the idea of interoperable NFTs – not cross-chain, but smart contract based. It allows NFTs to enclose multiple iterations and edits, as long as it fits the network parameters.

The project evolved from a mere idea to a full 3D multiverse with integrated NFT assets. The exciting artwork bears reference to the cyberpunk movement. Adjacent assets like pets, masks, accessories or bikes are fully on-chain customizable.

And that’s an important aspect to keep track of! NFTs become less rigid and more flexible, giving birth to a possible new era of NFT integration. We caught up with Donnie to offer the Banter Fam some insights into the project and help shed some on how the NFT market will change in the coming years.

So, that’s the context; now for the real treat. We caught up with Donnie to ask him how the project is shaping up!

1) What inspired you to kickstart EXOSAMA?

Around 4 months ago, we started MOONSAMA, launching the first tradable generative NFT collection and NFT marketplace within 3 days. Within a month after that, we built a multiverse bridge, allowing the bidirectional transfer of digital assets between web2 metaverses. The first “metaverse” we connected our bridge and the Moonriver blockchain to was Minecraft: It runs on every computer, it’s fun to play and it’s extensively moddable. We’ve had a lot of fun here and even used it to introduce the first NFT-backed metaverse land plots within the Polkadot/Kusama ecosystem. Moonsama has been a huge success not only in price (Mint = 1 MOVR; current floor = 370 MOVR) but also in players (achieving a new all-time high every week, despite limiting our alpha test to 250). Today, there is approximately $14.7M total value locked (calculated using the floor price) of Moonsamas locked into our multiverse bridge.

We’ve really enjoyed the experience and wanted to continue developing on the NFT/metaverse side of Polkadot. For that, we need to utilize a new NFT protocol and build our own metaverse from scratch, where we can control every line of code.

We wanted to showcase the power of RMRK NFT 2.0s as soon as they launch their Ethereum Virtual Machine contracts. Composable, multi-resourced NFTs that evolve over time. You can equip other NFTs onto your avatar NFTs. This is one of the most exciting protocols to come from within the Polkadot ecosystem, and it’s something that couldn’t happen on Ethereum due to the gas costs.

An example being with our EXOSAMAs you can equip different guns, hairstyles, pets, backgrounds, outfits and more. Our Moonsamas are low-res, pixelated characters that are not suited for this. We needed to create something high-fidelity to pull it off. So, we onboarded Luigi Lucarelli who has created characters for Disney, Universal, Nickelodeon and Hasbro. With his help we have created an NFT series of cyberpunk-inspired girls and a large series of NFT equipables.

Also with the recent launch of the Polkadot parachains, and notably the main Layer-1 EVM chain (Moonbeam) going live, we just had to launch something on there.

2) What is your roadmap looking like for the project?

We are adverse to time-sensitive roadmaps, we prefer an agile approach and to develop as quickly as we can.

Currently we are working on the following initiatives:

3) What is your strategy behind the new studio and budget, and how does that fit into your roadmap?

I recently announced that we had hired a game studio to help us develop a FPS (first-person shooter) game. My goal here was to deliver something quick and fun for our community to enjoy. At the back of my mind, however, I had the idea that our work on a 3D engine could birth an actual metaverse itself. A multiplayer 3D world where we can implement our NFT assets and others from within the Polkadot ecosystem.

The studio we hired was quite small. For what we’re doing we need a much larger team. One thing I have been focused on the most is expanding our internal art teams with the most recent addition being Justine Cruz, who is known for his work on Magic: The Gathering.

Rather than opting to create a very vanilla metaverse experience, we’re opting to take the route of focusing on lore/design. Our metaverse will be set in NOVA, based on the EXOSAMA lore, and Justine is helping us to design the bio-weapons/monsters that lurk within its depths. One thing we got right previously with implementing a metaverse on top of Minecraft was that it was fun to actually play the game. I feel that most metaverses spawning up currently are glorified chat rooms with nothing to do. We will not be taking that route.

Currently, our development is being financed by myself, and the budget is completely manageable. I’ve had a lot of success in crypto and now my focus is on building a world I’ve personally dreamed about for quite some time. We will release something tangible, demonstrate our ability to deliver, and then, towards the end of the year, conduct a raise prior to our parachain token launch to further facilitate team expansion.

4) When are you launching?

I consider NFTs to be the second biggest vertical in blockchain after DeFi. We haven’t really witnessed true blockchain adoption yet in the world, but these 2 verticals place demand on tokens right now. Demand drives speculation, which in turn drives markets.

Right now, I see the NFT market becoming highly saturated with new projects, and I predict a dramatic shift to a utility-focused narrative (not just token-gated chat rooms).

Corporations/large brands migrating towards the metaverse itself only adds fire to the catalytic power of the “metaverse” buzzword.

I genuinely think that once NFT 2.0s are demonstrated on an EVM chain, there will be a giant “gold rush” to utilize them. No longer will we have flat JPEGs covered in dust, but evolving NFT “Legos” with potential only limited by the imagination.

6) How does your project differentiate from others?

We will be one of the first real teams to fully utilize NFT 2.0s on a Layer-1 EVM chain (Moonbeam).

Our focus is on creating an engaging metaverse rather than just a glorified chat room.

We have no institutional backing to please, and we’re financing something we genuinely want to experience with our own funding. Despite that, we have been the first team within Polkadot to deploy a functioning metaverse, including NFT-backed land plots that are being utilized right now.

We are building out of passion, not greed. Most importantly we are arguably one of the most community-focused projects in the ecosystem. For an online world to succeed, you better hope there’s a die-hard community who will stick around to propagate it.

Donnie, Exosama’s developer, is a builder with a proven track record of successfully growing the expectations for NFTs on a platform other than Ethereum. To mark the release of the Exosama world, Crypto Banter received a few whitelist spots.

To win an exclusive Exosama NFT after mint, react to this article with your best comment about the project.

We will pick 5 lucky winners at the end of the week!