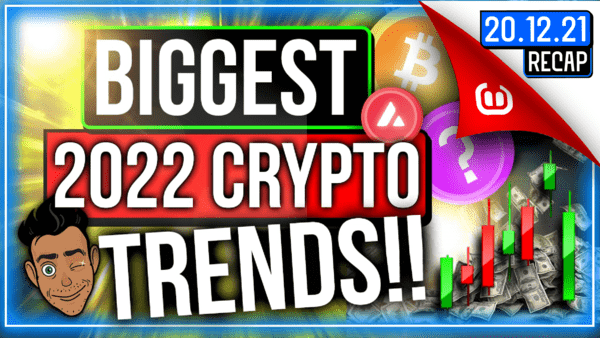 Aah, Christmas. For many, it’s a time to enjoy some family time, good food, and unwind. Translation? NGMI.

Just kidding. Everyone needs some R&R. But crypto moves fast. And with only a few days left of the year, the Banter fam are busy preparing for the next. That’s why we’re bringing you the big guns – to ensure the community is one step ahead of the curve.

Yesterday, Ran sat down for an interview with another titan of the space, a real crypto OG: founder and CEO of Messari, and the gigabrain behind Crypto Theses for 2022 – Ryan Selkis.

Bitcoin is king and that’s not changing any time soon, says Ryan, who thinks any talk of an imminent ‘flippening’ is premature. As for where we are in the market cycle? Well, he likes to stay away from directional bets, citing the many external factors at play. Clearly, governments will have to do something about inflation. Does it mean investors will move into cash, or keep upping the ante? Who knows. But between a shallow bear market or a continuation of a bull cycle in Q1, Ryan is leaning towards the latter. In fact, he’d be surprised if we didn’t see a blow off top!

To Peter Schiff’s horror, Bitcoin is legal tender in El Salvador. Where next? Ryan thinks potential candidates would be nations suffering high inflation, or where the rule of law is unstable: Argentina, Venezuela, or – unlikely given their President – Turkey! In spite of alternatives (USDT, DAI, or Terra’s algorithmic stablecoins), Bitcoin remains their best bet: it has proven staying power and isn’t subject to some of the risks facing these newer coins. Whether as a store of value, reserve currency, or legal tender, Ryan suggests it’s in a league of its own.

Ryan’s not convinced the ‘flippening’ is inevitable. Yet. Sure, Ethereum could outperform Bitcoin in terms of price action, but taking the number one spot is a different ball game. Not least because the merge to 2.0 is hardly a slam dunk! The margin for technical error is minute: a half-trillion dollar migration of assets to a brand new chain (and tech stack!) might not be smooth sailing.

Ryan Selkis hates Gary Gensler! Man, this guy doesn’t mince his words: he accuses the sitting Chair of the Securities and Exchange Commission (SEC) of doublespeak, hostage-taking (*not literally) flagrant dishonesty, and doing the very opposite of his job – protecting investors! You tell ‘em, Ry!

WTF is happening with the ETF?

Ran raises the question of an SEC approved spot ETF. Ryan’s answer is unequivocal: not any time soon! Why? Because the spot market isn’t under the SEC’s surveillance. That’s why they approved a ‘toxic’ futures product instead. Oh, and we’re probably stuck with Gensler for the duration of Biden’s first term. Hang on: he thinks sleepy Joe will serve a second term? Jokes aside, the real issue is how the crypto community can protect itself from Gensler, who Ryan describes as a kind of Lone Ranger type, hellbent on undermining the growth potential of the domestic crypto market.

You heard of Ethereum, bro?

As far as Ryan is concerned, the question isn’t whether Ethereum can keep its spot as the dominant smart contract blockchain, but whether it will maintain its market share? After all, gas fees are sky high, and alternative ecosystems are being developed at warp speed!

Still, Ryan thinks Ethereum will become a trillion dollar network and hit the $10000 mark in the process. How quickly that happens depends on the speed at which ‘the merge’ does or doesn’t take place, and the availability of interoperable liquidity solutions between Layer-1’s and Layer-2’s.

Optimistic and ZK rollups work and provide a valuable scaling solution. Period. But Ryan’s more interested in the broader implications: actually going from blockchain to blockchain. True interoperability. He suspects it’ll take longer to resolve than the bulls predict. Should that be the case, the other Layer-1’s will reap the rewards.

But just look at Ethereum: a victim of its own success!

If the alternative Layer-1s start suffering network congestion and punitive fees, then they’ll need Layer-2 solutions of their own. Ryan anticipates a multi-chain world with settlement between different blockchains and applications, each built on different stacks, and each with different use cases. And he thinks it’s just a matter of time before most of them win. The question, therefore, is how valuable will that winning marketplace be?

Applications are ultimately going to migrate to the chains that fit their needs. And it all comes down to fees, security and settlement speed. As long as Ethereum’s fees remain sky-high, it’s difficult to bootstrap new applications: they’ll either end up using Layer-2 solutions or an alternative Layer-1.

Whether the EVM is the best solution? Well, Ryan thinks it’s definitely one of them. Forever? Maybe. Probably. But right now, the space is working towards finding that second (and third) technical standard! The Cosmos Inter-Blockchain Communication protocol (IBC) has the potential. As for Polkadot? Solana? Either could rise to the top. Today, there are around a dozen protocols competing to become meaningful alternatives to Ethereum’s Virtual Machine, but he expects that to narrow to two or three within the next couple of years.

The new kids on the block

Ryan isn’t one to give financial advice, but it’s pretty clear what he’s got his eye on: Solana, Cosmos, Avalanche, and Cosmos, Terra, and Terra on Cosmos! And he’s bullish: if you’re going to make a calculated investment thesis going forward, the Ethereum alternatives are likely your best bet. Ran hoped to get Ryan to offer his advice on how a new investor should deploy $10,000, but Ryan’s an old hand – he wouldn’t give financial advice if his life depended on it! Still, reading between the lines, it doesn’t take a genius to figure it out – see above!

It’s official – Ryan owns a couple of NFTs. Most interesting, though, was his take on the parallels between NFTs today and early Bitcoin. Back in 2013, Bitcoin was about 0.1% of gold’s overall market cap. Today, it’s just below 10%. Ryan thinks something similar is coming to digital art, which currently represents 0.1% of the global art market. That’s a 100x increase from here!

Bullish! Kind of. Ryan expects Web 3.0 and metaverse plays to be hyped up. He also thinks investment in gaming is going to explode next year. But the returns could be terrible. The market is too overcrowded right now. Yes, he believes the metaverse will be a big deal. But he also doesn’t think the hardware’s up to scratch. Yet. To his mind, the question is: at what point is it developed enough that it becomes somewhere we spend a non-trivial part of our waking hours?

It could be a good few years yet. Further, who’s going to pull it off? Zuckerberg. Ran expects we’ll see Facebook (okay, Meta) build an incredible infrastructure. But the metaverse must (and surely will) be decentralized: the money, the storage space, the computing power keeping it running. Perhaps letting Facebook develop the tooling is how we’ll get there!

Both Ran and Ryan agree: bridges are going to be huge. Ran suggests they’re the most important feature under the hood, possibly more than the Layer-1; when Layer-1’s get clogged up, it’s the bridges that allow you to go from place to place. Are investors sleeping on bridges? Ryan expects a lot more venture capital to follow next year. In fact, NFTs, DAO infrastructure and bridges are the three core narratives he has for 2022!

We all know Ran’s addicted to BBS, the lunatic.

But what does Ryan think about decentralized social media? He’s bullish. He just hasn’t seen anyone crack the formula yet. Social media is supposed to feel like something organic, not a multi-level marketing scheme. Clearly, he hasn’t tried BBS! But whoever totally nails the user experience and launches a decentralized social network with legitimate incentives for creators… they’re going to do very well indeed.

Banter Wisdom
Wow, what a conversation. And it barely scratched the surface! If you haven’t read Ryan’s Crypto Theses for 2022, you’re in for a treat. It’s jam packed with insights, vision, and wisdom from one of the deepest thinkers in the space. Better yet, it’s free, making Ryan crypto’s answer to Santa Claus. Read it. Read it again. And learn to think like an investor. Crypto moves in narratives. While your average investor will follow the wind wherever it blows, the really smart ones learn how to see round the corner!